Hidden away from their family for the crime of illegitimacy, they died agonizingly slow deaths.

Hidden away from their family for the crime of illegitimacy, they died agonizingly slow deaths.

Oscar Wilde’s sisters feature little in the folklore that surrounds one of Ireland’s greatest literary figures. Most people can tell you that Wilde was a great wit, an evocative writer, and was jailed for sodomy but few know the tragic tale of his two half-sisters who perished in a fire on Halloween.

Wilde’s father, Sir William, had six children in total; three with his wife, Oscar’s mother, Jane, and three before his marriage with two other women.

Nineteenth-century Ireland was far from a welcoming place for illegitimate children, even in the slightly more liberal Dublin Anglican society the Wildes inhabited. It’s not clear if Wilde even knew of the existence of his sisters who were raised by relatives.

In 1871 Emily and Mary were at a Halloween party at Drumacon House in County Monaghan. The sisters might have been illegitimate but they were still frequently invited to high society events and it was at one such occasion that they met their demise.

Towards the end of the evening, Mary was asked to dance by the host but as she laughed and cavorted to the music her dress brushed up against the house’s candlesticks.

Screaming, she realized her clothes had caught fire and she dashed towards her sister for help. As the rest of the guests panicked and fled Emily’s own dress was set ablaze; accounts vary as to how the fire was put out but what we do know is that the siblings suffered excruciating agony before Mary’s death on November 8th and Emily’s on November 21st. They were only 22 and 24 years old respectively. 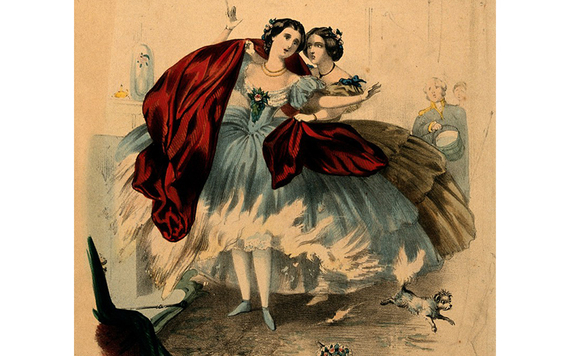 An illustration of crinoline dresses on fire, from 1860.

Their father saw to it that their deaths were hushed up, although given the notoriety of the event in certain Dublin social circles it’s difficult to see how he thought he could succeed.

The sisters were buried in the sod of Monaghan and an epitaph in a local church commemorates their short lives.

The epitaph on the gravestone reads:

who lost their lives by accident

They were lovely and pleasant in

their lives and in their death they