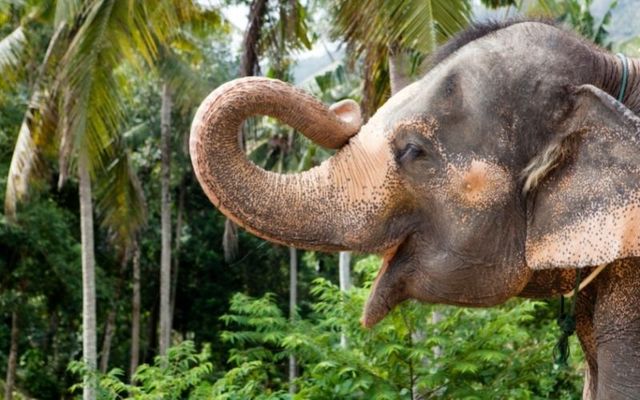 Cindy the circus elephant is memorialized in Co Roscommon decades after her visit.

A circus elephant named Cindy will now be forever memorialized in Castlerea, Co Roscommon after making a big impression when she visited more than half a century ago.

The Roscommon Herald reports that Cindy became a celebrity in June 1958 when the late Patsy Glynn Sr took a picture of the parading circus elephant coming out of Stephen Mannion’s Bar on Main Street, Castlerea.

Glynn’s photo appeared in several newspapers and in the Vintner’s magazine with the caption ‘customers come in all shapes and sizes.’

When Cindy the elephant died in Athenry in 1972, Castlerea Towns Trust offered a gravesite in The Demesne, and Cindy was buried there.

In 2014, local Seán Browne had the idea to mark the gravesite. With the help of local businessmen Benny O’Connell, John Keenan and stonemason Declan Hawthorne, Cindy’s grave was finally marked 42 years after she was buried.

An epitaph at her memorial, penned by Chris Kane from Williamstown, reads:

Gone to the Great Kingdom Beyond the Skies

The end of a mammoth reign

Home at last in Castlerea

Entombed in its Demense

Cindy the Elephant's grave, Castlerea, Co Roscommon. Cindy was made famous when she was papped by Patsy Glynn Sr, emerging from Stephen Mannion’s Bar on Castlerea’s Main Street in 1958 (swipe left for photo!). Cindy wandered into the pub while on parade through town before the circus. She died in Athenry in 1972 and Castlerea Towns Trust offered a grave-site in the Demesne of the former Castlerea House, where Cindy now rests ? . #castlerea #roscommon #cindy #cindytheelephant #elephant #grave #headstone #elephantgrave #exploreireland #circus #demesne #pub #mannion #athenry #parade #unusualgraves

Have you ever visited the Cindy the elephant's memorial in Co Roscommon? Let us know in the comments!