Would you dive into the Clontarf Baths for a swim on a December morning?! This historic newsreel, available from the Irish Film Institute, shows people doing just that in 1961. 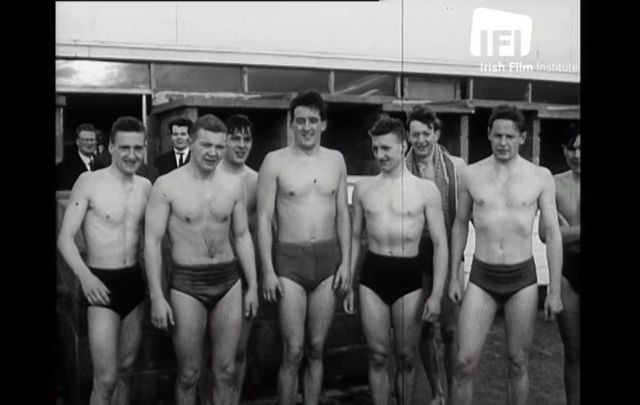 This "Christmas Day Swim" newsreel, now available to stream on the IFI's Irish Archive Player, shows the annual Dublin Swimming Club Christmas swim at the Clontarf Baths on a freezing December morning in 1961.

The crowd of wrapped-up onlookers cheered on the athletes as they braved the cold waters. The winner Neil Kennedy was awarded the trophy by Máire Potter.

In 1955, Ernest Blythe, Chairman of Comdhail Naisiunta na Gaelige, lent Gael Linn £100 to produce a short film for cinema and the Amharc Éireann (A View of Ireland) newsreel was born. From 1956 to mid-1957 Amharc Éireann consisted of short single-story items that were distributed to cinemas throughout the country on a monthly basis. Their popularity was immediate and by mid-1957, the Rank Film Distributors agreed to supply them to Irish cinemas along with their own newsreel, at which point they became issued on a fortnightly basis. By 1959, the success of this home-grown newsreel resulted in it being produced weekly and it expanded to include 4 separate news stories. The series continued until 1964 when the immediacy of television as a means of relaying news to the Irish population rendered the newsreel obsolete.

Produced by Colm O’Laoghaire, a total of 267 editions of Amharc Éireann were made. Although Gael Linn’s Amharc Éireann production ceased in late 1964 its influence is ongoing. The range of Irish interest subjects covered (from hard news stories to more magazine-like items) provide a vivid window into the development of modern Ireland at a particularly progressive point in its development and provide a first-hand insight into the moral, cultural, and economic development of the country throughout the Whittaker and Lemass eras.

"Christmas Day Swim" is currently featured in the IFI Archive Player's Christmas Crackers, a delightfully varied collection that will trigger all sorts of memories of Christmases past.

1960s adverts boldly promote booze and cigarettes as ideal gifts for friends and family, and Gael Linn’s cinema newsreel (1959 – ’64) capture the magic of the city streets lighting up, the simplicity of The Moving Crib, and the charm of Moore Street traders with their wind-up toys, while Kieran Hickey’s Moonmen celebrates the hardy swimmers of the Half Moon Swimming Club as they brave the elements on Christmas Day 1965.

"Christmas Day Swim" is published here with thanks to the Irish Film Institute (IFI), who IrishCentral has partnered up with throughout 2021 to bring you a taste of what their remarkable collection entails. You can find all IrishCentral articles and videos from the IFI here.