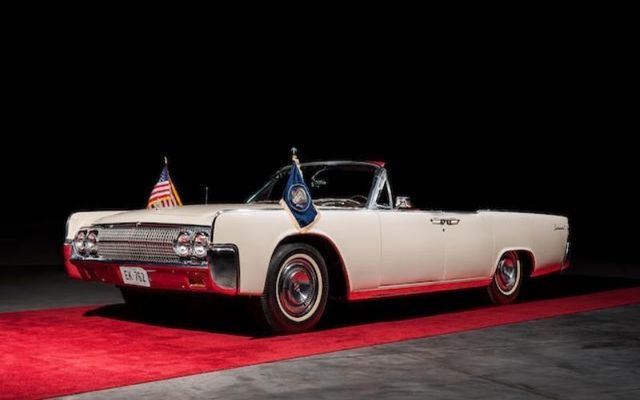 Kennedy rode in the white Lincoln Continental on the morning of his assassination. Bonhams

A Lincoln Continental convertible car that former President John F. Kennedy rode in on the day of his assassination is up for auction.

The white car, which is different from the convertible limousine that Kennedy died in, is up for virtual auction on Oct. 14.

The 1963 Lincoln Continental was loaned to Texas Governor John Connally on by a local car dealer on Nov. 22 to take Kennedy through Fort Worth on his way to Caswell Air Force base, where he flew to Dallas.

The SS-100-X Lincoln convertible remained in service until 1978 after a bulletproof roof was installed in the car. It is currently on display in the Dearborn Museum in Michigan.

It is currently owned by Jim Warlick, who bought it in 2013.

The car's original red interior remains the same as it was in 1963, although the engine has been replaced and repainted.

The car is up for auction as part of Bonhams' "The American Presidential Experience" auction on Oct. 14.

Kennedy's Black Mark V Lincoln car is also up for sale at the auction.

Also under the hammer at the mid-October auction is an Air Force One bomber jacket once owned by Kennedy. A seal of the President of the United States is sewn on to the right-hand side of the iconic jacket. 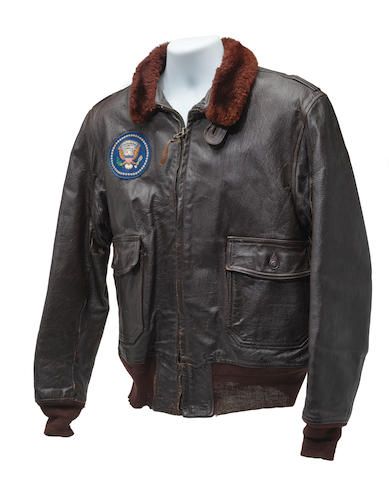 Kennedy gifted the jacket to David Powers, a friend, confidant, and special advisor to the President, who treasured the jacket and its historical significance.

In 1993, Powers lent the jacket to former President Ronald Reagan, who put it on display at the Ronald Reagan Library. A letter from Reagan to Powers thanking him for the loan of the jacket is also included in the sale.

A pair of cream-colored rotary telephones, which Kennedy used to make his last phone call on Nov. 22 from the Presidential Suite of Hotel Texas in Fort Wort, are additionally under the hammer.

Kennedy's last phone call was to Mrs. J. Lee Johnson, who had decorated his hotel suite with priceless art ahead of his visit. He had called her to thank her for her efforts.

Additionally, a full-scale model of the Oval Office, a full-sized replica of Kennedy's Air Force One Boeing 707 fuselage, and an original campaign flag from Abraham Lincoln's 1864 presidential campaign are all up for sale at next month's auction.