WATCH: Centenary commemorations for the Burning of the Custom House in Dublin

The Burning of the Custom House occurred 100 years ago today, May 25, 1921, when the IRA seized and set fire to the Dublin building. 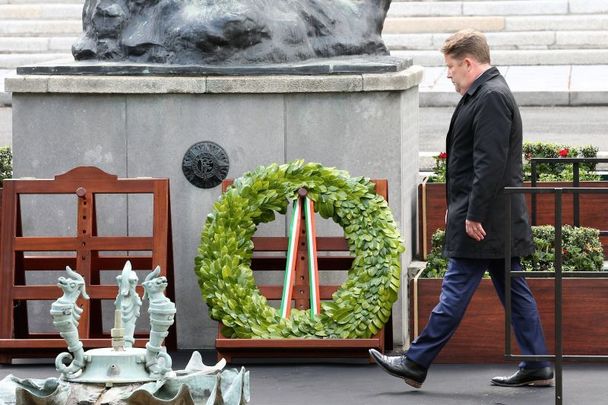 100 years ago today on May 25, 2021, the IRA, in what was its largest single operation during Ireland's War of Independence, seized and set fire to the Custom House building in Dublin.

Nine people – five IRA members and four civilians – were killed in the gun-battles, which took place in and around the building.

The Custom House, one of the British Government’s most important administrative buildings in Ireland at the time, was completely destroyed, along with its administrative records.

Six weeks later, the Irish and British sides in the conflict reached a truce, thus marking the end of the War of Independence.

On May 25th 1921, at 12.55 pm, during the War of Independence, the IRA carried out an attack on the Custom House, Dublin. Nine people were killed. The building and its administrative records were completely destroyed. See images taken at the time 👇 pic.twitter.com/gaKxVt6wM2

As part of the Government’s Decade of Centenaries, the Department of Housing, Local Government and Heritage today marked the Burning of the Custom House with a remembrance event held in conjunction with relatives of both those who took part in the attack and civilians who were killed in the attack.

The Irish Examiner reports that among those who laid commemorative wreaths in Dublin on Tuesday was Brian Parsons, a grand-nephew of Captain Patrick O’Reilly and Lieutenant Stephen O’Reilly, who were IRA volunteers killed on May 25.

Attendance to the event, which was streamed online. was limited to 15 people due to ongoing health restrictions.

'Burning of the Custom House'

Posted by Department of Housing, Local Government and Heritage on Tuesday, May 25, 2021

Today's commemorations were hosted as part of the Irish Government's Decade of Centenaries Programme for 2021. Several discussions, hosted by Liz Gillis and Mícheál Ó Doibhilín, about the 1921 Burning of Custom House are available to watch here on YouTube.

TD Darragh O'Brien, Ireland's Minister for Housing, Local Government and Heritage, said: “Today marks the 100th anniversary of one of the most significant events of the War of Independence.

"It is with a strong sense of history that my department and I, as custodians of the Custom House, remember the nine people who were killed in the attack, whilst also celebrating this remarkable, 230-year-old building.

"I am very pleased that my Department is playing its part in our Decade of Centenaries by remembering this event.”

TD Catherine Martin, Ireland's Minister for Tourism, Culture, Arts, Gaeltacht, Sport and Media, added: “We are now in the most sensitive and complex period of the centenaries programme.

"I welcome today’s commemoration, prompting all of us to reflect upon the significant historical event that took place at the Custom House a century ago. When exploring our history we have a responsibility to recognise the value of ideals and sacrifices, including their cost.

"On this significant centenary, we remember the nine people who lost their lives at the Custom House and the subsequent impact on their families and the campaign for independence.”

Ireland's Department of Housing, Local Government & Heritage also shared this brief 'The Burning of the Custom House' documentary on May 25: