Drama screenwriter wanted to tackle "ignorant” attitudes of the British to the Irish and the Famine with shocking TV episode. 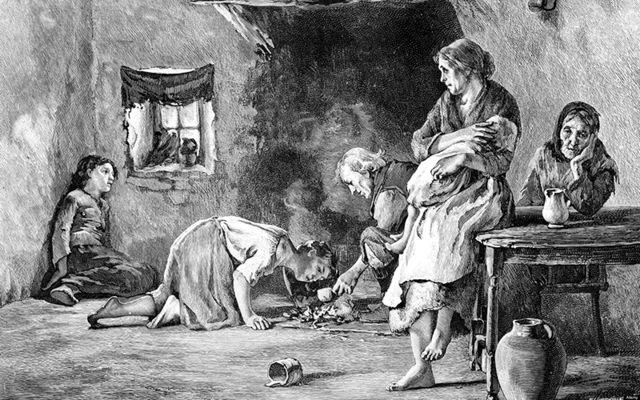 Illustration of an Irish family struggling during the Great Hunger.

The English creator of the period drama “Victoria” has said the British treatment of the Irish has an equivalent in the history of racism in America and she wanted to tackle "ignorant” attitudes of the British to the Irish and the Famine.

“It is only when you look at it like this that you understand how Britain and Ireland’s relationship has a similar history to the racism in America.”

Last week’s episode on the life of Queen Victoria on British television was a no-holds barred view of the sheer horror of the event and it generated a huge reaction.

Daisy Goodwin stated she wanted the direct quotes damning the Irish used by Sir Charles Trevelyan, who notoriously said “the judgement of God sent the calamity to teach Irish a lesson.”

Taking on Twitter, "Victoria" writer Goodwin said she was shocked by the “ignorance” in Britain about the events of 1845-1852.

“Everything Trevelyan says [in the program] about Ireland is based on historical documents,” she said.

“The ignorance in the UK of what happened in the Famine is shocking.”

She said the Famine is a “classic example” of victim-blaming by the British.

The ignorance in U.K if what happened in the Famine is shocking #Victoria #lessonsofhistory

“I don’t think that British people know anything about (the Famine). I would have included myself in that,” she separately told The Times.

“I studied history in Cambridge, but I never knew the extent of how and why it happened.

“I don’t want this to be taken in the wrong way, but there is a feeling that the Irish are always complaining about something.

“I wanted to write an article about the Famine before this series went out but no newspaper was interested. I think there is a feeling of ‘yeah, Irish, whatever.’ There is a fatigue about the relationship but it is not understood.”

“I wanted people here to understand the attitude of the British government victim-blaming the Irish.

“I read the archive of the time and was really angry about how completely wrong they were.”

She added “I don’t think anybody knows about that in the UK, and I can imagine in Ireland that is really upsetting.”

This is the end scene of the episode of “Victoria” which shocked the British public: