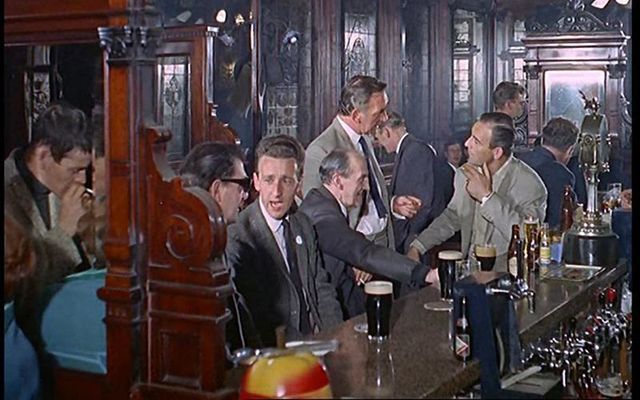 A still from "See You at the Pillar".

The 109-year-old media company British Pathé has scoured its archive for its best content related to Ireland and has made three vintage nuggets available on its streaming service, British Pathé TV.

This is the first time that British Pathé has released these three Irish programs - See You at the Pillar, Land of Magic, and The Workhouse Ward - to watch in broadcast quality and free from any watermarks.

The three Irish programs are:

See You at the Pillar

A 1967 documentary about Dublin that was Oscar-nominated for Best Documentary Short. It is narrated by Anthony Quayle and Norman Rodway and was produced by British Pathé. Its writer and director was the BAFTA award-winning producer (for High Journey) Peter Baylis.

An incredibly funny story about two grumpy men who live in an Irish workhouse. The Ria Mooney production dates from 1950, though the original play was written by Lady Gregory in 1909.

Alastair White, CEO of British Pathé, says of this releases “These three gems from our vaults are a wonderful insight into Irish and Northern Irish culture as British Pathé cameramen and editorial staff of the 1950s and 1960s viewed it. They’re beautifully filmed, and it’s a genuine pleasure to be able to make them available in broadcast quality so that they can really be fully appreciated. British Pathé’s coverage of Irish news and events was unparalleled, but these longer cultural timepieces often get overlooked among all the content related to the Revolution and the Troubles.”

As for the decision-making behind British Pathé TV generally, Alastair explains, “There are many viewers, myself included, who are not being catered for by the mainstream channels. We wanted to create a long-form programming service that can provide a real alternative for those with specialist interests when schedules of many factual channels are clogged with celebrities and reality television.”

The three vintage pieces are complemented by British Pathé and Zampano Productions’ Revolution in Colour, a 90-minute documentary about the Easter Rising, also available on British Pathé TV.

British Pathé is one of the oldest media companies in the world. It recorded every aspect of global culture and news for the cinema. With their unique combination of information and entertainment, British Pathé documentaries, newsreels, serials, and films changed the way the world saw itself forever. Decades after newsreels have left our screens, the company continues as a pioneer of filmed entertainment, launching British Pathé TV. This new online on-demand channel offers an extensive range of full-length documentaries, interviews, and classic movies.

They can be viewed by subscribers to British Pathé TV, which costs £5.99 per month. There is a 30-day free trial, after which you can cancel at any time. (You can also see 3-minute previews of each video without subscribing.) The service is available to everyone, anywhere in the world and can be streamed via the website on laptops, tablets or mobiles. A selection of images for journalistic use and clips for broadcast are available on request. Visit www.britishpathe.tv for more.