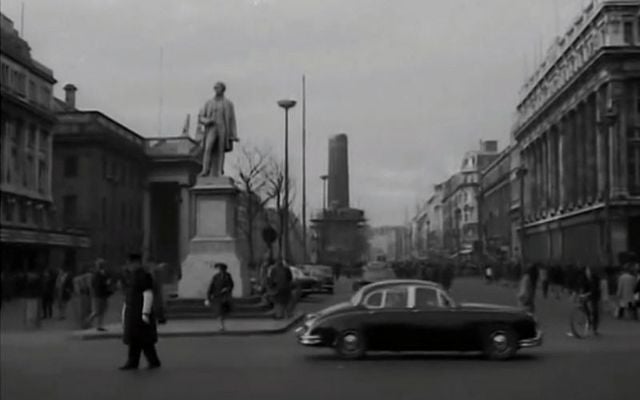 The stump of Nelson's Pillar, on Sackville Street (Now O'Connell Street). It took 157 years, but the demolition finally happened. YouTube

For many, the biggest surprise about the blowing up of Nelson’s Pillar in Dublin on March 8, 1966, is why it took 157 years. The resentment had run deep. Almost fifty years after the 1916 Rising an Englishman still towered over every other notable in the city, many groused.

When the pillar was constructed circa 1808 the Protestant Ascendency class who had erected it celebrated. To them, Vice-Admiral Horatio Nelson was a once-in-a-lifetime hero, the man who at the Battle of Trafalgar in 1805 had turned the tide against Napoleon.

But after Irish independence was won his presence and preeminence atop the 120-foot high pillar became increasingly controversial. He had been famously cold-hearted and an adulterer, some said. Why not have an Irish patriot replace him, they asked?

Habit, wrote Samuel Beckett, is a great deadener. People seem to have gotten used to him. The pillar had a certain grandeur, James Joyce had written. It had also become a landmark. Did it matter if it was in honor of some long ago, far away Brit?

Apparently, it did. In the early hours of the morning of March 8, 1966, a huge explosion rocked central Dublin and the top half of the pillar was blown sky-high.

Senator David Norris, who thought the bombing ignorant and unnecessary, told RTE: ‘It provoked the only recorded instance of humor in that lugubrious figure, the late President of Ireland Eamon De Valera, who is said to have phoned the Irish Press to suggest a headline ‘British Admiral Leaves Dublin By Air.’

Later the Irish Army was sent in to finish the job with a controlled explosion. Some men were later arrested but never charged. Dublin quickly adjusted to the missing monument.

Though many supported the dramatic demolition the rejoicing was by no means unanimous. Senator Owen Sheehy-Skeffington lamented in the Senate that ‘the man who destroyed the pillar made Dublin look more like Birmingham and less like an ancient city on the River Liffey - the pillar gave Dublin an internationally known appearance.’

What happened to Nelson’s head after the explosion merits a mention. Seven hearty students from the National College of Art and Design reportedly stole it on St. Patrick's Day from a storage shed in Clanbrassil Street.

Later they leased the head for over $300 dollars a month to an antique dealer in London for his shop window. Then it reappeared sometime later on the stage of the Olympia Theatre for a concert performance with The Dubliners.

After further comical wanderings (which included an unlikely appearance in a ladies' stockings commercial) the high-spirited students finally handed it over to Lady Nelson. It was later stored in the Civic Museum in Dublin and now resides in the Gilbert Library, on Pearse Street where it’s now rarely seen.

But of course, it was an Irish poet (Louis MacNeice) who said it best in his poem entitled ‘Dublin’:

Grey brick upon brick,
Declamatory bronze
On somber pedestals –
O'Connell, Grattan, Moore –
And the brewery tugs and the swans
On the balustraded stream
And the bare bones of a fanlight
Over a hungry door
And the air soft on the cheek
And porter running from the taps
With a head of yellow cream
And Nelson on his pillar
Watching his world collapse.