A mad dash across the Tipperary countryside went down in local lore as The Blackcastle Races! 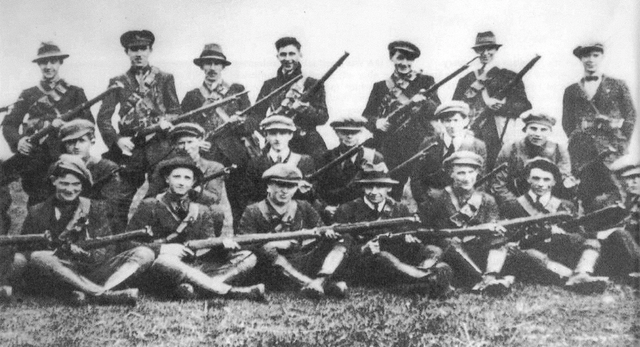 Quick thinking saw the IRA men get away with documents, arms, and maps before they escaped with British soldiers in hot pursuit.

Sunday, Sept 12, 1920, was a fine sunny day in Tipperary. At Blackcastle, near Rosegreen on the road to Cashel, senior Irish Republican Army officers such as Sean Treacy, Seamus Robinson, and Ernie O’Malley among many others had gathered at Maher's farm for a brigade meeting.

As the meeting was about to get underway, over 100 British soldiers of the 13th Lancers, based in Chair, rode up the laneway to the farm on horseback.

Quick thinking Charlie Maher ran and closed the gate to the farmyard. It gave the IRA officers, who had gathered in the hay barn at the back of the yard, some time to escape.

They collected what they could,  documents, arms, and maps, and made a break for it across the oat fields with the Lancers in hot pursuit.

This mad dash across the Tipperary countryside would go down in local lore as "The Blackcastle Races!"

Sean Treacy took cover behind a ditch and fired on the Lancers, thus providing the rest of his comrades more time to escape before he took flight.

Men scattered in all directions. One slipped into an algae riddled pond where he covered himself in algae and stayed there undetected until he made good his escape when the Lancers weren't looking!

Just three IRA men were captured that day at Blackcastle. Seamus O'Neill Commandant 2nd Battalion, Jack O'Keefe adjutant 8th Battalion, and Edmond McGrath Commandant 6th Battalion. In his witness statement for the bureau of military history, McGrath recalled how in Cashel Barracks that night the three men in their cell received "an unpleasant visit from a big burly scar marked black and tan." The three men were later sent to Wormwood Scrubs to serve a two-year sentence of hard labour.

It would have been a major coup for the crown forces if they captured all at Maher's farm that day. The quick-thinking Charlie Maher and the heroics of Sean Treacy ensured the Lancers did not catch the whole senior staff of the Tipperary Brigade.

With his famous luger pistol, Treacy kept the Lancers at bay while the rest of the "wanted men" fled. When his ammunition was spent Treacy also sprinted away. He later went to Dublin where with Dan Breen on Oct 11 their safe house in Drumcondra was raided. The two Tipp men shot their way out and although wounded they both escaped. Days later on October 14th  Sean Treacy, the hero of the Blackcastle Races, was killed by British agents in a shootout on Dublin's Talbot Street.

The Lancers rode from Cahir town,

On the twelfth day of September,

The year of nineteen twenty,

There were rebels all assembled at,

The farmyard of the Mahers,

But soon their meeting was upturned,

And they made a hasty scatter.

Chorus: For the nation, run like blazes, at the Blackcastle Races.

There were lads from all battalions,

Meeting in the haggard,

With a documents and orders and arms all a gathered,

But the sight and sound of lancers,

All the kings men and horses dare not outrun the Tipp brigade.

To slow the enemy gallop,

Sean Treacy drew his luger and,

Served them Lead in dollops,

The commandants and adjutants,

With lancers at their heels,

All sprinting for old Ireland,

Through the Tipperary fields.

They jumped the ditches,

A safe house or a trial,

Some raced as far as Rosegreen,

Others raced to Fethard,

Some finsied the race at Cashel,

Others ended it at Sladdagh.

*this verse sung much slower*

But a sad note now I end on,

Three were caught and taken,

To the barracks at Cashel and a British prison sentence,

Our hero Sean Treacy fell on a Dublin street,

He drew his famous luger but death it had him beat,

But let's not dwell on sadness,

Nor cry or be afraid,

Three cheers for the boys,

Of the Tipperary Brigade.