The Faddan More Psalter was discovered by a bulldozer driver in 2006 while extracting peat from a bog near the village in north Tipperary. 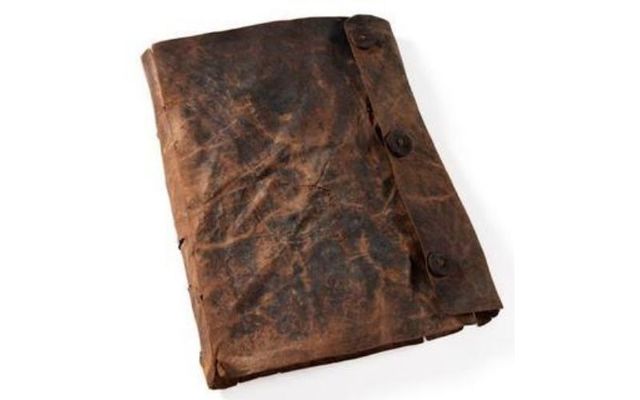 The cover of the Faddan More Psalter. National Museum of Ireland.

A 1,200-year-old manuscript that was unearthed in a bog in Tipperary in 2006 has become one of Ireland's most treasured artifacts.

The Faddan More Psalter was discovered by bulldozer driver Eddie Fogarty in July 2006 while extracting peat from a bog near the village of Faddan More, north Tipperary.

Fogarty luckily noticed the psalm book peeking out from the bucket of his peat harvesting machine, kickstarting a five-year effort to retrieve and preserve the precious medieval artifact.

John Gillis, the chief manuscript conservator at Trinity College Dublin who was tasked with preserving the Faddan More Psalter, said that the discovery "blew him away".

Gillis helps conserve the Book of Kells, the Book of Armagh, and more than 450 other ancient manuscripts but told the Guardian that the Faddan More Psalter was the most unique project he has undertaken.

"It was by far and away the most challenging, most interesting project I have ever undertaken – and to put that in context, I am surrounded by these iconic manuscripts," Gillis told the Guardian.

Gillis described the preservation process as "absolutely terrifying" and said that he spent months just staring at the "conglomeration" of pages, leather, and turf before starting any conservation work.

The process involved stabilizing the manuscript once it was removed from the bog, drying it, and unfolding its pages where possible.

The work was painstaking, and Gillis had no manual to guide him on how he should proceed.

He could not conduct CT scans or X-rays over fears that the tests could accelerate the deterioration of the ancient manuscript.

After trialing a number of drying techniques, Gillis eventually settled on a dewatering method using a vacuum chamber in a lab at the National Museum of Ireland to minimize the shrinkage and decay of the book over the course of four years.

He could only start the unenviable task of dismantling the book when all of the pieces were in a dry and stable state.

The book's condition had significantly deteriorated over the last 1,200 years, with many spaces between its iron gall letters dissolving into the bog and leaving Gillis with thousands of standalone letters to sequence on the right pages.

He told the Guardian that he experienced many "sleepless nights" while undertaking the project but added that the work was incredibly rewarding.

"The rewards when you slowly lifted up a fragment, and suddenly beneath this little bit of decoration would appear, particularly the yellow pigment they used. It would kind of shine back at you," he said.

Gillis described the work as the "purest conservation" he has ever undertaken and chronicled the efforts to preserve the treasured manuscript in a new book entitled "The Faddan More Psalter, The Discovery and Conservation of a Medieval Treasure".

Preservation of the book varies from page to page, with only loose letters or the edges of some pages surviving in some cases.

The ancient manuscript is comprised of 60 sheets of vellum divided into five gatherings and contains the standard 150 psalms, with the opening letter of each psalm marked with a capital. Meanwhile, the opening words of the first, 51st and 101st psalms are decorated in a style used in other Irish psalters.

The text is written in gall ink and several pigments are used for decoration, while it features a vegetable-tanned leather cover with a papyrus reed lining, which suggests that ancient Irish monks who wrote it had trade links with Egypt.

The manuscript is protected by a wallet-shaped leather cover with three buttons fastened to its flap.

Maeve Sikora, a keeper of Irish antiquities at the National Museum of Ireland who worked with Gillis on the preservation of the manuscript, told the Guardian that its discovery and survival were "very much against the odds".

"The fact that such a fragile organic object survived for a millennium in wet conditions, the fact that it was noticed … and the fact that a full bifolio survived and allowed Gillis to ascertain the codicological details of the psalter are all very much against the odds," Sikora told the Guardian.

The Faddan More Psalter has been on display at the National Museum in Dublin for 10 years and is now one of Ireland's top 10 treasures.