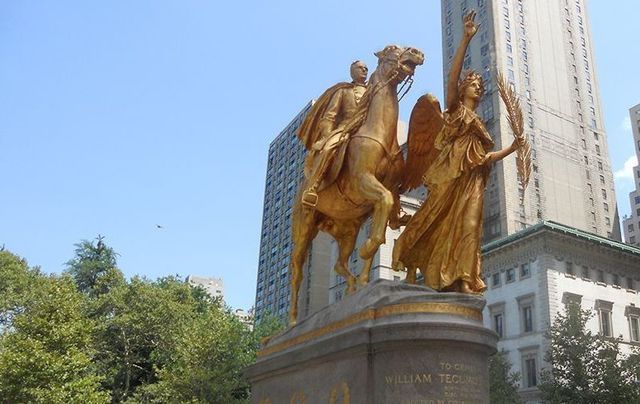 The name Augustus Saint-Gaudens means nothing to most Americans. This is surprising because Americans view and admire his works across the United States daily.

If you’re staying at the Plaza Hotel in New York you are amazed at the golden prominence of General William Tecumseh Sherman and his horse, led by allegorical Victory, has over that part of swanky Fifth Avenue. If you live in Chicago you thrill to his portrait of Abraham Lincoln in Lincoln Park. In Boston, his Shaw Memorial at the edge of Boston Common celebrates the black soldiers of the Union Army and their leader, Robert Shaw. In Washington, D.C. the poignant grief of the Adams Memorial is sure to provoke the most stoic of hearts. New Yorkers walk by Admiral Farragut in Madison Square every day without even thinking that this was the man who said, “Damn the torpedoes, full steam ahead!” during the Civil War.

And most people don’t know that the man with the strange name of Saint-Gaudens was born in Dublin to an Irish mother, Mary McGuiness, and a French father, Bernard, in the great famine year of 1848. At six months, Augustus—known to one and all as “Gus”—was swept away to New York in steerage to avoid the Great Hunger. The family first landed in Boston, but soon was settled in New York. Young Gus grew up in the city of the Irish “Gangs of New York,” and worshiped at Old St. Patrick’s Cathedral on Mulberry Street, the home of Archbishop “Dagger” John Hughes, who shepherded his Irish flock against the nativists who wanted to ship all of them back to Ireland. It is also the New York of the Civil War riots of 1863, not one of the better moments for the Irish.

Gus’ father opened a shoe repair shop and kept a sharp eye on his son. At 13, young Gus was apprenticed to a cameo maker where he soon showed he had exceptional artistic talent. This led him to studies at Cooper Union and the National Academy of Design. Years later, he would thank Cooper Union with a sculpture of its founder, Peter Cooper. In 1867 with $100 in his pocket, his father shipped him off to friends in Paris for further study. In 1870, he found himself in Rome where he met his wife, Augusta. 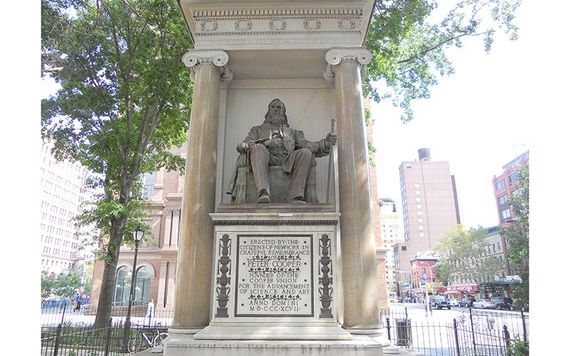 Gus and Gussie returned to New York where, in 1876, he received his first great commission—the statue of Civil War naval hero Admiral David Farragut in Madison Square Park. His friend Stanford White designed the pedestal. Saint-Gaudens and White also hooked up again in 1894 with Saint-Gaudens' controversial nude statue of Diana, which was mounted at the top of the original Madison Square Garden. 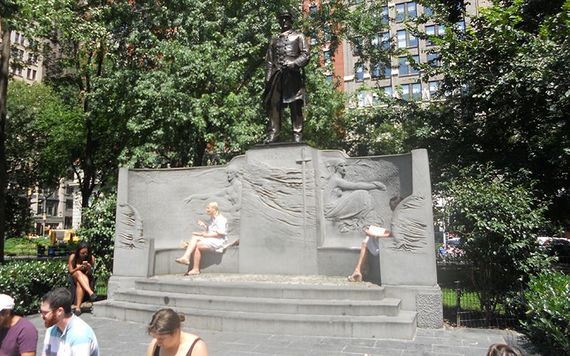 With studios in New York, Paris, and Cornish, N.H., Saint-Gaudens became the most prolific American sculptor of the late 19th century. “Standing Lincoln” in Lincoln Park, Chicago, was unveiled in 1887 with Stanford White designing the base. Lincoln was followed in 1891 by the Adams Memorial (commonly known as “Grief”) in Washington, D.C.’s Rock Creek Cemetery.  Once again, White contributed the base upon which the statue rests.

1897 saw the unveiling of perhaps his greatest work, the Robert Gould Shaw Memorial in Boston, which commemorates the black Union soldiers of the Massachusetts 54th and their leader, Colonel Shaw. Another black soldier, former Secretary of State Colin Powell, had this to say about it on PBS’s "American Masters": “I think the Shaw Memorial is a very moving experience when you first see it. And what I always notice first are the black soldiers, who are leaning forward slightly as they march south out of Boston, heading to destiny. And what moves me is this look of determination on their face—they’re leaning into the future. Once a black man put on that blue uniform with the gold buttons, and U.S., and carrying a rifle, a weapon, and performing a mission for the nation then ultimately no power on the earth can persuade that individual that he is not the equal to his white brother. And there in the middle of it on a horse, sitting up tall, is Colonel Shaw.”

1903 saw the dedication of Union General William Tecumseh Sherman outside Central Park at the intersection of 59th Street and Fifth Avenue. The massive gilded statue of Sherman on horse, led by Victory, is one of most august eye-catching and dominating figures on the entire island of Manhattan. 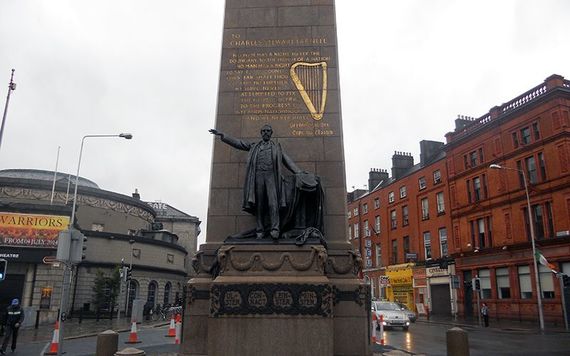 A monument to Charles Stewart Parnell was the idea of John Redmond, the leader of the Irish Parliamentary Party (IPP). Redmond had stood by Parnell in his time of scandal and thought a monument might be a way to reunite the IPP. The Parnell Committee was formed in 1898 with the purpose of raising money by public subscription to build the statue. Saint-Gaudens took on the project and the corner stone was laid in 1899 at Sackville and Great Britain Streets, now O’Connell and Parnell Streets. It was the last great project Saint-Gaudens was to undertake.

The project was marked by tragedy from the start. After the Paris Exhibition of 1900 Saint-Gaudens was struck with intestinal cancer. Although weakened, he continued to work. The work on the statue took place at his Cornish, N.H. studio. But a fire in 1904 destroyed the almost completed statue with only the head surviving. “More than all the rest of my losses in the fire,” Saint-Gaudens said, “I regret, as an Irishman, the loss of the Parnell statue.”

Although ill, Saint-Gaudens went back to work to fulfill his promise to the people of Ireland. The final version of the monument has Parnell in frock coat with one hand resting on a table and the other pointing in the direction of the Rotunda Maternity Hospital. The obelisk behind him is made from ashlar granite and the four Irish provinces and the 32 counties adorn the base. The quote behind Parnell declares: “No man has a right to fix the boundary to the march of a nation. No man has a right to say to his country: ‘Thus far shalt thou go and no further’. We have never attempted to fix the ne plus ultra to the progress of Ireland’s nationhood and we never shall.” In Irish on the base of the statue is the inscription: “Go soirbhigidh Dia Éire dá clainn” (May God make Ireland flourish for her people).

Saint-Gaudens died in 1907, four years before the unveiling of the Parnell Monument.  In the year of his death, President Theodore Roosevelt said of him: “There is no greater artistic genius living in this or any other country.”

When he was late in delivering his Shaw Memorial, Saint-Gaudens defended himself saying: “It’s the way a thing’s done that makes it right or wrong. That’s the only creed I have in art. After all, statues are plastered up before the world for centuries while man and nations pass away.”

It was a wise perspective when the statue was dedicated in 1911 because within seven years John Redmond would be dead and his Irish Parliamentary Party would be extinct because of revolution. Eleven years later the British would be gone from Dublin forever. But Parnell is still there, hoisted on his monument by a Dubliner born into the Great Famine, but who survives in his monuments to greatness.

* Dermot McEvoy is the author of the "The 13th Apostle: A Novel of Michael Collins and the Irish Uprising" and "Our Lady of Greenwich Village," both now available in paperback, Kindle and Audio from Skyhorse Publishing. He may be reached at dermotmcevoy50@gmail.com. Follow him at www.dermotmcevoy.com. Follow The 13th Apostle on Facebook here.