Skeletons of over 500 children who died during the Great Hunger were found buried in a mass grave within what was once the Kilkenny Union Workhouse. 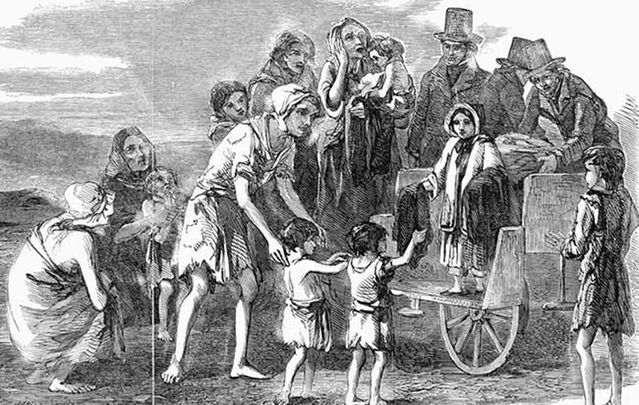 Bio-archaeologists have been able to uncover the harrowing stories and medical secrets of over 500 children. WikiCommons

Skeletons of over 500 children who died during the Great Hunger were found buried in a mass grave within what was once the Kilkenny Union Workhouse.

With over three years of research on their bones, bio-archaeologists in 2014 uncovered the children's harrowing stories and medical secrets.

The study, funded by the Irish Research Council, is based upon the “skeleton manifestation of stress in child victims of the Great Hunger.” Although it is known that more than half of those who died in the Great Hunger were children, little research has so far been focused on their experiences before death.

545 children were buried within the grounds of the Kilkenny Union Workhouse between 1847 and 1851, almost two-thirds of whom were under age six when they died.

Skeletal studies found that all of the infants between six and twelve months – and three-quarters of the children between one and twelve years of age – had been affected by stunted growth.

University College Cork bio-archaeologist Dr. Jonny Geber examined the skeletons over a period of three years, focusing on how children who lost their parents suffered during the Great Hunger. Although many children's parents died, children over the age of two were also taken away from their parents because of workhouse segregation.

“It is really sad when you now think about the youngest children trying to cope with this situation and then how many of them ended up dying in the workhouse,” Dr. Geber told the Irish Examiner.

“With this research, I can tell the story of those who did not survive the Famine, which is a story that has never been told. Through interpreting their skeletons you can get a unique insight.”

According to Dr. Geber, most deaths during the Great Hunger were caused by infectious diseases rather than directly by starvation.

Studies on the teeth revealed that scurvy was rampant among the children. “It’s a very painful disease as it affects your muscles, and you also get bleeding gums which we could see along the teeth…it may have been painful to eat for these children.”

The tooth examinations also found that children who’d already experienced illness before the Great Hunger was likely to survive longer than the other children.

On top of malnutrition, scurvy and various infectious diseases, the study suggests that the children were put under severe physical as well as mental distress in the workhouse, especially the ones who’d been separated from their parents.

“Young children need a lot of emotional security and comfort for their well-being and I’d say they lost a lot of that when they went into the workhouse,” Dr. Geber said. “There are many studies that tell how lack of emotional comfort and care increase the risk of death in small children that are institutionalized.”

Find out the meaning behind your Irish surname - Part I