Now 100, the little Irish girl who rode an Orphan Train to Texas

Beatrice Flanagan Polak Fojtik celebrated the landmark birthday on April 25, 2021, 99 years after she rode into Sealy, Texas on an Orphan Train. 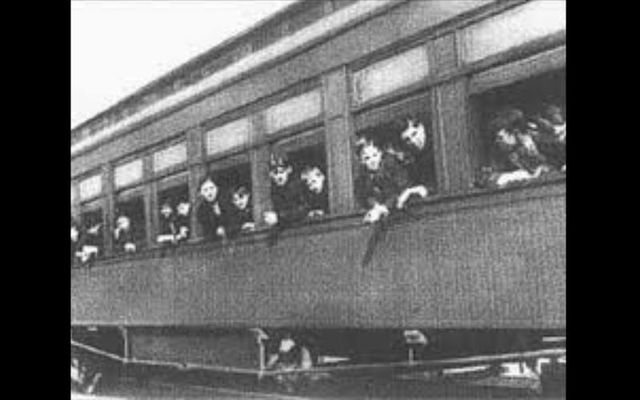 Children on board an Orphan Train. Wikimedia Commons

An Irish woman who rode an Orphan Train from New York to Texas as an infant in 1922 recently celebrated her 100th birthday, possibly making her the last surviving Orphan Train passenger.

Beatrice Flanagan Polak Fojtik celebrated the landmark birthday on April 25, 2021, 99 years after she rode into Sealy, Texas on an Orphan Train.

Fojtik was born at New York's Bellevue Hospital to a 29-year-old single Irish woman named Josephine Flanagan, who worked as an elevator operator.

Unable to care for the baby, Josephine deposited her newborn child at the front door of New York's Foundling Hospital in what was essentially a baby dropbox.

In 1922 at the age of 14 months, the infant was sent west on an Orphan Train that stopped at New Orleans, Galveston, and several other destinations before reaching its final destination at Sealy after three weeks.

There, a nun from the New York Foundling Hospital handed over the 14-month-old baby to Mary Kubes Polak, a 42-year-old widow who lost one of her sons ten years previously. Polak, who spoke only Czech, owned a farm in the Czech immigrant town of East Bernard where she lived with her 18-year-old son.

Fojtik learned to read and write in both English and Czech at a young age and started school at seven, skipping a grade because she was already proficient in English.

She never completed high school because she was told that she didn't need school to raise a family and married local farmer and carpenter George Fojtik at the age of 19.

Beatrice raised five children with her husband, who died at the age of 52.

She helped her husband raise rice and cotton on the farm and became a celebrated baker of homemade apricot, peach, prune, poppy seed, apple kolaches.

She also worked in the local school cafeteria for years and spent her summers as a bookkeeper at the local cotton gin.

Beatrice said that her journey on the Orphan Train gave her a "fighting chance" and said that she was glad that she made it out of New York. She currently resides at an assisted living facility around 30 miles west of the Colorado town of Rosenberg.

She was one of some 250,000 predominately Irish infants who were moved from New York and other eastern cities to new homes in every state in the US between 1854 and 1929.

Sandra Thomas of the Colorado County Citizen described the Orphan Train program as the largest child migration scheme in history, while others describe it as "the beginning of documented foster care in America".

The Children's Aid Society of New York started the program in 1854 to take thousands of abandoned children off the streets of New York.

The New York Foundling Hospital, which transported Beatrice to Sealy, was founded 15 years later in 1869. The hospital was run by the Sisters of Charity and relied on contacts in rural contacts to get children placed in homes across the country.

Orphan Train descendent D. Bruce Ayler told the Orphan Train Complex website that the program was not perfect but said that it was the first attempt to find a practical system for abandoned children.

"Many children that would have died, lived to have children and grandchildren. It has been calculated that over two million descendants have come from these children. The trains gave the children a fighting chance to grow up," Ayler said.

That is certainly true for Beatrice Flanagan Polak Fojtik, who celebrated her 100th birthday last month.

Fojtik could be the last surviving passenger from the Orphan Train program, but there is no way of knowing for sure until 1929, according to Shaley George, curator of the National Orphan Train Complex.

George told the Houston Chronicle that there is no way to be certain until the 100th anniversary of the last Orphan Train in 1929.