Cornelius Francis Healy, from Cambridge, Massachusetts, can still vividly recall his involvement in some of the key moments of the Second World War. 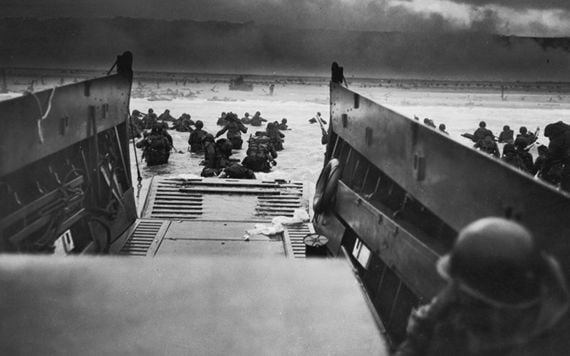 Allied soldiers during the invasion of Normandy on D-Day. Getty

An Irish-American Second World War veteran who fought in D-Day and the Battle of the Bulge has recalled his wartime experiences after turning 100 last month.

Cornelius Francis Healy, from Cambridge, Massachusetts, turned 100 on Feb. 20, 2021, and the US veteran can still vividly recall his involvement in some of the key moments of the Second World War.

Healy qualified for an exemption from the war as he was the principal breadwinner of his family but felt duty-bound to play his part.

He spoke to the Boston Globe shortly after his landmark birthday to reflect on his part in the war and revealed that he was almost killed in a training accident in England along with 25,000 US soldiers prior to the Allies' assault on Normandy.

Tens of thousands of American troops were preparing for the invasion of Normandy on the south coast of England five weeks before the D-Day landings, while British gunners were firing just over their heads to create a realistic environment.

However, some British gunners continued firing for too long and accidentally shot and killed some 200 American soldiers.

Meanwhile, German torpedo boats in the area took advantage of the commotion to sink two landing vessels and kill a further 749 men.

The rest of Healy's D-Day preparations passed without incident and he recalled spending two sleepless nights in England before crossing the English Channel ahead of the June 6 invasion.

The Allies had cut through the German pillboxes overlooking the English Channel by the time Healy arrived, so he avoided much of the conflict on the beaches of Normandy on June 6.

However, his wartime adventures were far from over.

Healy spent the first night after the Normandy Landings 500 yards inland before embarking on a 20-mile trek to the strategic town of Saint-Lô that took a grueling six weeks to complete.

He said that the arduous journey was "the worst part of the war" and remembered struggling through overgrown hedgerows that slowed the Allies' progress to a snail's pace.

The 100-year-old veteran said that soldiers were lucky if they could snatch a few hours of sleep under cover of darkness and said that they lived in constant fear of German 88mm artillery.

Healy recalled one shell exploding between him and a fellow soldier; he was fortunately unhurt, but the shrapnel tore his comrade's leg apart from foot to hip.

He carried the wounded soldier across a field to the relative safety of an Allied convoy before continuing toward the town of Saint-Lô.

When just one hill separated his outfit from the town, Healy courageously joined a patrol to warn the American troops in the town below of an impending German barrage.

As the soldiers returned to their outfit after warning the troops in Saint-Lô in the early dawn light, they were spotted by German soldiers and had to scurry through hedgerows to a salvo of bullets.

Healy was ultimately awarded a Bronze Star for his role in the incident for showing "utter disregard for his own safety" to ensure that the mission was a success.

He made it to Paris in August 1944 when the city was liberated from German rule and continued to the Belgian border, where the Allies were met by a desperate and last-ditch German counteroffensive that became known as the Battle of the Bulge.

As a member of the Army’s 29th Infantry Division, Healy provided support for American troops from behind the frontlines.

He narrowly escaped death during the month-long counteroffensive when a German Messerschmitt Me 262 strafed the road that he was located on and advanced into Germany when the offensive was eventually crushed at the end of January 1945.

Healy recalled riding horses and motorcycles with Russian soldiers at the Elbe River when the war in Germany came to an end in May of the same year and spent the last days of the Second World War tallying points that soldiers had accumulated toward a discharge.

He returned to the United States in September 1945 and wept when he cast eyes upon the Statue of Liberty.

Healy initially struggled to adjust to post-war life and eventually became a civil engineer for the state of Massachusetts, working as a surveyor and a construction supervisor on Routes 128 and 495 in addition to the Mid-Cape Highway.

He never mentioned his involvement in the war until the 1980s and modestly downplays his Bronze Star.

"I was able to have a normal life and a long life. The heroes never came home," Healy said.