3,500 records from Ireland’s War of Independence to be released

Ireland's National Archives set to release over 3500 files relating to claims for damages and compensation by individuals or relatives. 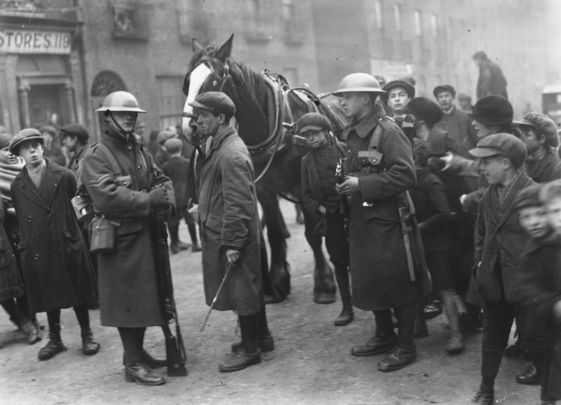 Children watch armed British troops in Dublin prepare for a 'round up' of civilians during the War of Independence. Topical Press Agency/Getty

Heart-breaking, human and very personal accounts of the suffering endured during the period of the War of Independence and Civil War are to be released in April 2023.

A series of files consisting of claims for damages by individuals for injuries or death during Ireland's War of Independence or Civil War have been transferred from the Department of Finance to the National Archives.  Work will now begin on these files preparing them for public release in April 2023.

This collection contains first-hand accounts by claimants including medical and personal data relating to events during a turbulent period in our history.  The collection is heart-breaking on a very human level, demonstrating that people of all ages, from all and no sides, were affected in varying ways during these difficult years.  The files relate to ordinary men, women and children going about their daily lives; in cities, towns, on farms or in businesses who were either deliberately targeted or shot, or accidentally caught in the crossfire or bomb blasts.

Speaking of the records, Minister for Tourism, Culture, Arts, Gaeltacht, Sport and Media, Catherine Martin TD said: “These records show in a very profound way how lives were lost or shattered during the War of Independence and the Civil War.

"This collection includes heart-breaking accounts of the physical injuries inflicted on ordinary people, but also the psychological injuries too, the unseen effects of war from those who took their own lives, or ended up in institutions unable to forget the terrible events they had witnessed."

"In a retelling of painful events, through the recounting of ‘facts’ and the awarding of damages on varying scales, this collection brings home the true reality of the human cost of those turbulent times.”

Speaking at the National Archives, Minister for Finance, Paschal Donohoe TD said "What makes these files important is what they do not contain. With the exception of a number of papers relating to fatalities of Bloody Sunday 1920, the overwhelming majority of claims are from individuals otherwise unrecorded by history, the silent majority. The files give insight into not just well-known events like Bloody Sunday and the shelling of the Four Courts, but also minor actions in every county of Ireland and places as far away as India.

"I have no doubt that when this collection is made available to the public next year that the stories within will be an invaluable source of social and personal histories for historians, academics as well descendants and family members.”