George Blake did more damage to British interests than any spy in history. However, his escape from prison and dash to freedom in Russia was all arranged by  Sean Bourke an Irish fellow  prisoner 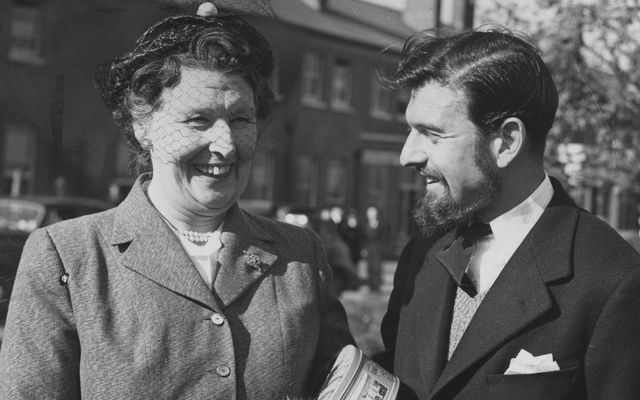 British double agent George Blake with his mother in 1967. Getty

The death at 98 of Russian super-spy George Blake in Russia where he had spent his life from 1966 after escaping from Wormwood Scrubs has brought back into focus the Irishman who made his incredible escape possible.

Sean Aloyisious Bourke (1934–1982) was a small-time criminal from Limerick who died of alcoholism in 1982. Blake was serving a 42-year term for betraying his country, exposing at least 50 spies, and leading to the deaths of scores of other secret and double agents working for the British and America. He destroyed the MI6  intelligence network and dealt a huge blow to anti-Russian operations.

He was sentenced to 42 years, the longest-ever term by a British court.

Bourke was born in Limerick far from the upper-class upbringing Blake enjoyed but had a flair for the dramatic, not entirely surprising as Richard Harris was a second cousin.

Bourke got into trouble at an early age, sentenced to three years in a reformatory at age 12 for stealing bananas from a truck.

On his release, he drifted into adulthood with little ambition and ran foul of the law on several occasions.

In 1961 he moved to Britain and did not fare any better. He was convicted of sending an explosive device through the mail to a policeman who had angered him. He was sentenced to seven years in 1961 for the crime.

He crossed paths with Blake in prison where Bourke edited the prison magazine and Blake contributed reviews.

On his release, Bourke had apparently promised his now close friend he would try and rescue him in return for a large financial donation.

In 1966 Bourke smuggled a walkie-talkie into Blake, possibly supplied by Russian authorities. The plan was for Blake to break a window in his corner cell during the time of 6-7 pm, which was when a nightly movie was attended by guards and convicts.

The plan was for Blake to escape his cell by climbing out the window and sliding down a pipe and getting to the outside wall. With the help of the walkie-talkie, Bourke would know his location and throw a ladder made of knitting needles over the wall. They had a safe house ready, given by two anti-nuclear activists.

The operation went according to plan except for Blake breaking his wrist when he fell while climbing down the wall. Otherwise, they made good their escape.

Despite an intense manhunt Bourke and the anti-nuclear activists got Blake out of Britain smuggled in the back of a van. The pair immediately headed for East Germany and crossed over safely.

It was all downhill from there for Bourke. He lived in Moscow on a special pension supplied by the Russian government but could never settle as Blake did.

He returned to Ireland and gave a sensational television interview which led to an urgent extradition request from the British government which was refused on several occasions by Irish courts on the grounds that Bourke’s act was political.

Bourke wrote The Springing of George Blake, an account of the escape and became a strange celebrity. But he soon faded from the limelight and ended up living in a caravan in Kilkee, County Clare. He drank heavily and died in 1982 from alcoholism.

The death of Blake this week revived memories of Bourke’s role in his escape which was the stuff of spy fiction which in this case became fact,