All the basics - and some fun facts - about County Roscommon. 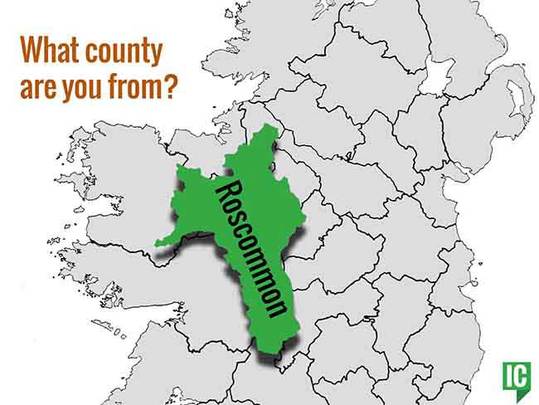 This month, we're promoting our new "Explore Ireland" map page! Take a look at some interesting facts about County Roscommon from its common surnames to famous Rossies.

Nickname: The Sheepstealers, The Rossies

A brief history of County Roscommon

In mythological Ireland, Rathcroghan, in present-day Roscommon, was the seat of Queen Maebh (Maeve), the Kings of Connacht, and later the High Kings of Ireland.

Roscommon was officially established in 1585, when the Tudors reinstated the land division of Connacht. It is outlined by water, with Lough Key in the North, the River Shannon and Lough Ree to the East, the River Suck to the West.

In 2008 it was revealed that statistically, Roscommon has the longest life expectancy of any county on the island of Ireland.

There is also a County Roscommon in Michigan.

Lough Key in north Roscommon has 32 islands – coincidentally, the number of counties on the island of Ireland. Nearby is Lough Key Forest Park.

Boyle, a city at the foot of the Curlew Mountains, is known for its history and culture. There you will find Boyle Abbey, which was founded in the 12th-century, and, each summer, the Boyle Arts Festival. It is also the hometown of actor Chris O’Dowd and his TV series "Moone Boy."

Tulsk is the nearest village to the mythological (and archaeological) site of Rathcroghan, home of Queen Maebh. It was also the starting point of the Táin Bó Cúailgne, an epic tale in Irish mythology.

Strokestown Park House and Famine Museum is an award-winning museum dedicated to telling the story of the great Irish Famine.

GIVEAWAY: This Celtic women's group will plant a native Irish tree in Ireland in your honor