All the basics and some fun facts about County Cavan. 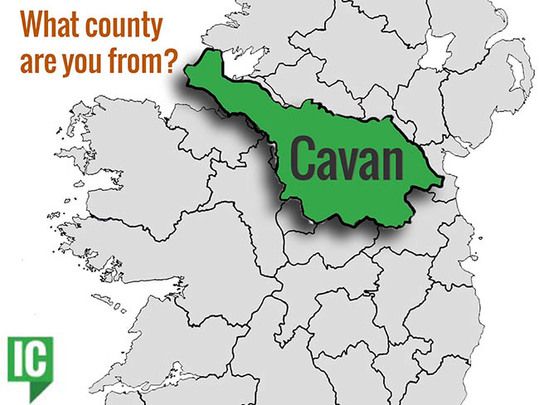 Irish Name: An Cabhán – "The hollow"

Nickname: The Breffni County – if heaven existed on earth, it would be Cavan.

Jonathan Swift often stayed at Quilca House, the home of classical scholar Thomas Sheridan, and was godfather to his children.

Ed Reavy, the renowned fiddle player, immigrated to Philadelphia from Cavan when he was fourteen. In the 1920s, he made some of the first recordings of traditional music.

Shane Connaughton, author of the novels "A Border Station" and The Country Boy, grew up in Redhills. He also wrote the screen-play for the Oscar-winning film "My Left Foot."

The American novelist Henry James' grandfather William was born in Bailieborough. He emigrated to New York and at the time of his death was thought to be the third richest man in America.

Famous Cavan women include Charlotte Brooke was the daughter of Henry Brooke of Rantavan, near Mullagh. Henry was a lover of words, and passed on his passion to his daughter. Charlotte silently saved the Irish language from extinction, and laid the foundations for its more recent revival. She was particularly interested in Irish epics and sagas and began collecting and translating them. This resulted in "The Reliques of Irish Poetry," published in 1789, today seen as a seminal publication in Irish history.

Perhaps inspired by Charlotte Brooke’s work Professor Agnes Farrelly also of Mullagh wrote widely about the Irish language and succeeded Douglas Hyde (first President of Ireland) as Professor of Irish Poetry in the National University of Ireland in 1934.

The O'Reilly family (still the most common surname in the area) established a castle in the town in the late 13th century. A Franciscan monastery was also established at around the same time. King James I of England granted the town a charter in 1610. The phrase 'Life of Reilly' was credited to the O'Reilly clans due to their great wealth and power, having created and issued their own currency during the 1600s.

In the late 19th century, Cavan became an important rail junction between the midland and western lines and those of the Northern Railways. The Town Hall was built in 1909. In 1938, work began on the Roman Catholic Cathedral of Saints Patrick and Felim.

Three miles west of Cavan Town is the Church of Ireland Kilmore Cathedral, which contains a Romanesque doorway dating from the 12th century. Farnham House, to the northwest of Cavan, is one of the largest houses in the county. It is believed to have been built for the Maxwell family – who hold the title of Baron Farnham – in 1810. It was sold by the widowed Lady Mairead Smith and the house and estate has now been converted to a luxury hotel.

A little known fact about Cavan is that the famous classic Gulliver’s Travels was reputedly penned by Dean Jonathan Swift while vacationing in Mullagh, a beautiful village in East Cavan. The main character in the book Gulliver was loosely based on a local giant of a man, Big John Doughty, who was so strong he could carry a pony on his shoulders.

For more in depth information on Cavan please check out ThisIsCavan.

Situated on an island in the middle of the lake, Lough Oughter Castle was built by the Anglo-Normans in the early 13th century when they tried to conquer the Cavan area. It was soon captured by the O'Reilly family, the Irish rulers of east Breifne, who used it as a prison for the rest of the Middle Ages. Owen Roe O'Neill, leader of the anti-English revolt of the 1640s, died here in November 1649.

There you will also find Killykeen Forest Park, which is full of walking trails and wildlife.

Lough Sheelin if fishing is what you are interested in.

Dun a Ri, the forest of the kings in Kingscourt is worth a visit.

Ballyhaise College – one of the finest examples of Georgian architecture in Ireland. Now an agricultural training college.

Shannon Pot – source of the river Shannon, Ireland's longest river. The longest river in Ireland, the River Shannon has it’s source in Cavan in the Shannon Pot. Cavan is known for its rolling hills and lakes shaped by the last Ice Age. There are 365 lakes in Cavan, one for every day of the year. With all the lakes fishing is a very popular attraction for locals and visitors.