A brilliant solstice enhances the season

This year's Winter Solstice event at Newgrange in Co Meath was an earthy, primal experience and the perfect antidote to the commercialization of Christmas. 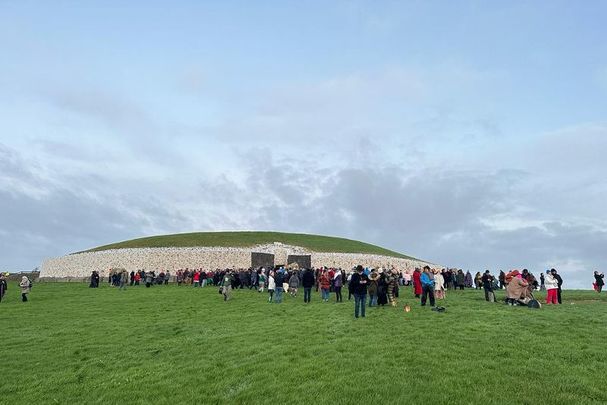 December 21, 2022: Newgrange in Co Meath on the morning of the Winter Solstice. Office of Public Works @opwireland, Twitter

It wasn’t quite the Journey of the Magi, but last week I, along with about 1,000 other people, headed to Newgrange to follow a star and await the rising of the sun as the longest night of the year transformed into the shortest day.

In doing so I was following in the footsteps of Celtic ancestors and taking part in a tradition dating almost 3,500 years. The event took place on the slopes of the Boyne at Newgrange where the spiritual, astrological, and mythological coincide.

For the majority, the entrance to the ancient burial ground was by foot, a two-mile trek supervised by gardai and stewards with the ambulance service also present.

The Winter Solstice is fast becoming a “thing” that needs to be managed, an overnight success after two centuries.

While the lucky few got into the cairn to see it lit up by the sun’s rays, the rest of us assembled outside to await the dawning of the new day. As we gathered, in a circle, holding hands, the clouds magically broke at the appointed time and the sun briefly shone through.

It was met by a mixture of guttural cheers, chanting, and a cacophony of music from an assortment of instruments and drums. In our midst were modern druids dressed in traditional clothes and new age spiritualists. The dancing and singing continued long after the sun had risen.

Thanks to Lisa for sharing her photo . She was one of the many people this morning soaking up the atmosphere. #WinterSolstice2022 #Solstice #sunrise #meditation #holdinghands pic.twitter.com/eXjwClOuA2

It was the perfect antidote to the commercialization of Christmas. No bright lights or jingling music, and despite the sweet smell of incense that was being burned, there were no vendors of homemade candles or wax melts.

Neither were there hot dog stands or coffee stations. It was an earthy, primal experience, pagan in origin but welcoming to all.

It was but a brief respite from the modern pressures of being “all set” for Christmas. From putting up the lights and decorations on the tree, to buying the gifts and making sure the turkey and ham are prepared, we all become so wrapped up in meeting the expectations of the season that sometimes its meaning gets lost. From Santa letters to shopping lists, the treadmill keeps turning.

After a two-year break because of Covid some traditions resumed with gusto. Office parties were back with a bang and hotels, restaurants and pubs had a bumper season.

Towns and cities have seen the influx of Christmas sweater-clad groups wandering around town as part of the revived 12 pub ritual. This has become a rite of passage where young people have a drink in 12 separate pubs in the one night. Not for the faint-hearted or weak livered.

Carol singers were ubiquitous, and why not? Hadn’t they two years without performances? In many locations, their numbers were supplemented by talented singers and musicians from Ukraine who were experiencing their first Irish yuletide.

The Irish pantomime scene, a mainstay for young children post-Christmas, hit the news headlines with complaints of unfair competition from RTE, the state broadcaster, that entered that market this year.

Less welcome for retailers was a resurgence of cross-border shopping. People from as far away as Cork have been reported making round trips of over 400 miles to Northern Ireland to stock up for the festivities. The main draw was the price differential in drink.

The minimum unit pricing law that was introduced in January in the Republic is driving consumers to the North. This outlaw cheap booze includes buy one get one free alcohol promotions.

Historically, the most popular product during the Christmas period were slabs of beer (24-pack cans). In 2021 they cost between €20 to €25. This December the same slab will set you back €40 to €45. With prices in Newry and Belfast still remaining at last year’s levels there is a clear incentive not to shop local.

But it wasn’t just drink that provided value, with lower VAT rates ensuring that electrical goods such as TVs and computers were also cheaper in the six counties.

The continuing underlying weakness of sterling was also a competitive advantage for northern traders.

The battle for the consumers’ euro was unrelenting, fought out on TV screens, newspapers, and social media, which is why the opportunity to refocus offered by the Solstice was so important. And like all great experiences, it came at no cost.

But of course, it wasn’t the only one, and for Christians, Christmas Day is synonymous with Mass and religious services.

Congregations were much larger than normal, comprising the regular attendees, folks home on holidays, and people who were there through either a sense of religious curiosity or to continue a family tradition. Here too all were welcome as we sat, stood, and kneeled through yet another ceremony that has been performed over the centuries, relatives and friends with whom we had shared these happy days very much on our minds.

So, Christmas 2022 came to an end in the very dead of winter, a few short days in every sense of that word. From the rising sun in Newgrange to the glitzy decorations on main street and the advent candles in the church, the motif of light connected the ancient with the new, the pagan with the Christian, and the living with those that have gone before us.

Happy New Year to all!

*This column first appeared in the December 28 edition of the weekly Irish Voice newspaper, sister publication to IrishCentral. Michael O'Dowd is brothers with Niall O'Dowd, founder of the Irish Voice and IrishCentral.