Newgrange's Winter Solstice 2022 was attended by thousands of people, though only a lucky few got to be inside the ancient chamber to witness the magic. 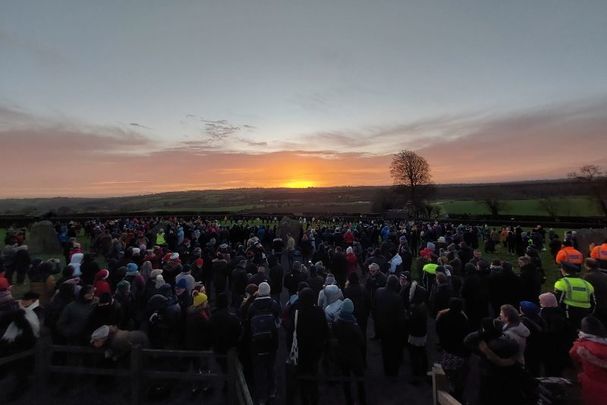 December 21, 2022: Crowds watching the sunrise at Newgrange in Co Meath on the morning of the Winter Solstice. Ireland's Office of Public Works

Newgrange's Winter Solstice event was attended by thousands of people this year, a welcome return after no visitors were permitted for the last two years due to the pandemic.

The Winter Solstice event at Newgrange in Co Meath on December 21 saw thousands of people descend upon the Neolithic site, though only a select few were permitted inside of the Chamber to witness firsthand the solstice magic.

12 people, selected from a pool of thousands of applications, as well as five staff members, were inside the tomb to witness the solstice this year.

According to the Irish Times, this year's lottery winners came from as far away as New Zealand and Canada, and as nearby as Co Meath, to witness the solstice from inside the Chamber.

Due to some cloud cover, the inside of the Chamber was only partially illuminated this year:

Shortly before the solstice, RTE journalist Samantha Libreri gave a sneak peek inside the ancient tomb, which predates Stonehenge and the Pyramids at Giza:

Inside Newgrange before the sun rises on the winter solstice @rtenews pic.twitter.com/cOYTCfMlGG

Outside, visitors formed a large circle, beat on drums, and sang to welcome the shortest day of the year.

Thanks to Lisa for sharing her photo . She was one of the many people this morning soaking up the atmosphere. #WinterSolstice2022 #Solstice #sunrise #meditation #holdinghands pic.twitter.com/eXjwClOuA2

According to Ireland's Office of Public Works, the solar alignment of the passage tomb at Newgrange to face the rising sun on winter solstice is a significant astronomical finding of global importance.

Originally rediscovered by Prof. Michael J. O’Kelly in 1967, other researchers have validated O’Kelly’s interpretation giving it scientific credibility and meaning.

The OPW says that analysis of high-resolution imagery taken during last year’s research programme now adds to the convincing body of evidence that the solar illumination of the tomb was intentional.

A lottery draw has been operated by the OPW since 2000 for a place in the Chamber at Newgrange to witness the Winter Solstice each year on December 21.

Delighted to have welcomed back the lottery winners to experience the #WinterSolstice sunrise from within the chamber @newgrangeknowth. The sun did not disappoint today.
Read more⬇️https://t.co/2DpbH538Xx#Sunrise #Solstice #DiscoverIreland @irishexaminer @meathchronicle pic.twitter.com/Bni4Gzm5so

However, due to the pandemic, the OPW was not able to welcome visitors to Newgrange in 2020 or 2021 for the Winter Solstice vent.

The OPW instead organized the live streaming of the Winter Solstice in both 2020 and 2021 to compensate for the absence of the annual lottery draw. As the chamber was vacant those years, it offered viewers a unique and unparalleled opportunity to witness the rays of light from the rising sun as they entered the chamber.

While the 2022 event was not live streamed, Ireland's Irish language channel TG4 carried footage of the spectacular Newgrange event on TV and on Facebook.

Patrick O’Donovan, Minister with responsibility for Ireland's Office of Public Works, said on Wednesday: “I am delighted to welcome the lucky winners of the very popular OPW Solstice Lottery competition to Newgrange to witness first hand this archaeological phenomenon.

“For many people, the Winter Solstice is a very significant and special occasion, where we bid farewell to the long dark evenings and herald a bright beginning for the year ahead.”