Who should police Ireland’s police?

The disagreement between Irish police and the regulators set up to investigate them refers to the age-old question - who watches the watchmen? 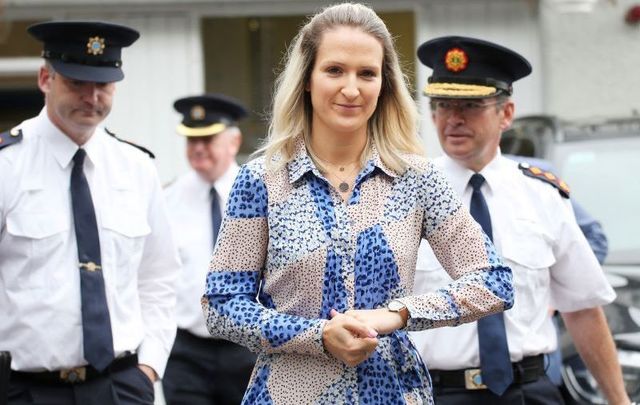 July 6, 2020: The Minister for Justice, Helen McEntee TD leaves Slane Garda Station as she speaks to the media after a meeting with Garda Commissioner Drew Harris on the right. RollingNews.ie

Ireland's Minister for Justice Helen McEntee returned to work last week after six months (yes, six months, while Americans get little or no time off officially) on maternity leave, her duties during that time carried out by a colleague.

There are many items in her in-tray that she needs to deal with, but top of the list must be a determination to knock heads together so that an unseemly dispute between the Garda Síochána, our police force, and the regulators set up to investigate them can be brought to an end.

The disagreement refers to the age-old question which dates back to second century Rome, of who watches the watchmen? 'Quis custodiet ipsos custodes?' is a Latin phrase that translates as "who will guard the guards themselves?"

Who indeed? Even in a country like Ireland where there is overwhelming support for the unarmed gardaí, there is an understanding that not all apples in the barrel are red and rosy, and a belief by some that police cannot be trusted to police themselves.

It all depends on perspective. Is it a case of individual bad apples, or is the tree itself rotten?

The Irish public has an expectation that the gardai will exercise their powers of search, detain and arrest to the highest standards of competence, fairness, and honesty and where necessary use only reasonable force. That has not always been the case as recent investigations have shown.

During the Northern Ireland Troubles, there was a notorious “heavy gang” of Special Branch detectives who wrongfully accused and physically harmed some suspects by getting false confessions. Those days are thankfully gone.

While incidents of suspected corruption are rare, they are nonetheless significant. In total over 70 garda members are suspended at present as investigations into allegations against them are being pursued. To put this in context, it is less than half of one percent of a garda force comprising almost 14,400 sworn members.

Among current investigations, up to 100 gardai are reported to have been interviewed in the Limerick region in connection with the cancellation of fines for motoring offenses.  A more serious case involves a retired senior garda who has been questioned on suspicion of giving confidential information to a Dublin drugs gang about garda operations.

Other gardai are also under investigation for assault, theft, and in relation to information leaked about the extradition from Spain of the notorious drug dealer Gerry Hutch, aka The Monk, who is charged with murder.

It is not just corruption that has brought a spotlight to bear on their activities.  In one of their most upsetting and egregious breaches of trust, a CCTV video of a young woman running naked in Dublin in 2017 was copied by a member of the force and shared on WhatsApp. The footage was then uploaded to Facebook by another person where it was viewed over 100,000 times before being taken down.

Journalist Dara Quigley, who had mental health issues, took her own life five days later. It has taken four years for her untimely and tragic death to be considered by a coroner’s court, and following its deliberations last month a government minister offered the family a fulsome apology for what was termed unacceptable behavior. Garda Commissioner Drew Harris had separately written to the family apologizing for the actions that had "grossly breached" Quigley’s "constitutional and data protection rights."

An internal report by gardai into wrongdoing published in April of this year admitted that because of the unique nature of policing, internal corruption will always pose a threat to the integrity of the force. It highlighted shortcomings in the anti-corruption strategy and called for major changes.

So far so good with everyone on the same page, acknowledging there is a problem and accepting that something must be done. However, agreeing on what that “something” should be is when the problems start.

Garda management has taken the lead and set up their own anti-corruption unit similar to internal affairs units within U.S. police departments. Their initial priorities are in relation to misuse of power for sexual gain as well as random testing for drugs.

However, the Ombudsman for the Gardai (GSOC) is not satisfied with this, claiming that any investigation into internal wrongdoing should be routed through the GSOC, pompously appealing to the high moral ground on the principle that a police force should not investigate itself.

This from a body that made a song and dance out of an allegation that a member of the force threatened to set his dog on cats belonging to a woman who broke the lockdown rules last year. High principles indeed, with a strong urge to say to GSOC that well-known phrase, generally thought of but unsaid at police checkpoints -- do you not have anything better to be doing with your time?

Their opposition to the anti-corruption unit is clearly a case of letting the perfect be the enemy of the good, or perhaps to the cynical mind at play to get an increase on their $13 million annual budget.

For their part, gardaí are unhappy about new legislation that will give GSOC the power to enter and search garda stations without a warrant as well as, among other things, instigate investigations without informing the garda commissioner. And yes, they too rest their case on human rights and constitutional objections.

While both sides fight out an increasingly bad-tempered dispute in an attempt to out-principle each other bemused citizens look on, the only saving grace being that the number of criminal offenses recorded fell sharply in most crime categories in the first quarter of 2021 due to the pandemic.

It’s true to say that the pandemic was a challenge for the force, and in facing it they made many friends. Apart from policing the lockdown, they took on a semi-social worker role.

Gardaí delivered thousands of meals to cocooning residents in communities nationwide as part of various meals on wheels projects. One such initiative was where gardaí in Donegal teamed up with local restaurateurs to assist in the supply and delivery of freshly prepared and cooked meals to local residents on a daily basis. In Dublin, the community gardaí attached to Kilmainham garda station provided support to St. James Hospital in the distribution of care packages donated by the public to the staff and patients at the hospital.

The garda’s image was also assisted by several unhinged attacks on them by prominent Covid conspiracy campaigners. Sadly one such case led to a heartbreaking outcome in the case of Garda Alan Leblique.

In a tragic echo of what happened to Quigley, Leblique was subjected to a tirade of online abuse following a viral video posted by anti-mask campaigner Gemma O’Doherty and he died suddenly in January. In tributes following his death, he was remembered as “a hero and a credit to his profession and to the community and the country he served."

So that is the nub of it. At the end of the day, the gardaí are part of our community, our friends, neighbors, family. This is not a zero-sum situation and while they most certainly need robust oversight, they also need support.

Over to you, Minister McEntee.

*This column first appeared in the November 10 edition of the weekly Irish Voice newspaper, sister publication to IrishCentral. Michael O'Dowd is brother to Niall O'Dowd, founder of the Irish Voice and IrishCentral.