Ukraine’s fight for freedom and what it teaches us

This week's Irish Voice Editorial: "We must also salute the men and women of Ukraine – outmanned, outgunned, outnumbered and still holding." 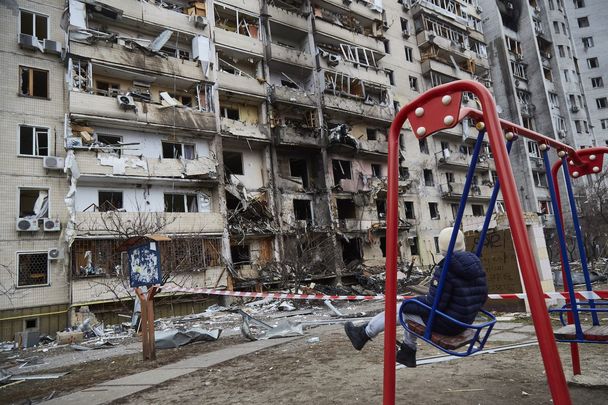 Kyiv, Ukraine: Feb 25, A child on a swing outside a residential building damaged by a missile. Getty

The Irish Voice Editorial ponders on the privilege of freedom that President Zelenskyy and his people fight for.

"From every mountainside let freedom ring” were famous words uttered by Martin Luther King in his “I Have a Dream” speech of 1963.

We in America have been given the wonderful gift of freedom. It is not something we think often about, but every now and then the incredible importance of the gift becomes clear.

George Washington tasted it, as did his army and the people after the British left America on Evacuation Day in 1783. Abraham Lincoln knew what it meant for those enslaved in 1865.

Now we are learning it from a little-known country far away.

Just three weeks ago, Ukraine was a place many Americans would not find on a map. Now the country is on everyone’s mind in one way or another.

We watch daily as the noble people of Ukraine fight, sometimes with their bare hands for the freedom, we take so much for granted. This generation of world citizens are seeing in real-time what freedom means to an innocent country attacked needlessly by a savage tyrant, and we are getting an education on an incredibly brave resistance.

In President Volodymyr Zelenskyy, Ukraine has found its George Washington, a brave leader who has inspired not just a nation but most of the world. Fearless and tireless, he makes clear there will be no surrender in the evilest war since World War II.

Like that war, there is no equivocation over who the monsters are. Russia is trying to crush the freedom that Ukraine currently is fighting for. Zelenskyy is just the latest in an honor roll of worldwide leaders who sacrificed all for freedom.

This St. Patrick’s Day, as we march joyously, we remember those from Ireland through the centuries who gave their lives so we and they could be free.

But we must also salute the men and women of Ukraine – outmanned, outgunned, outnumbered and still holding off what was once considered one of the two most advanced armies in the world

Resisting the occupier is part of Ireland’s fundamental history. From the men and women of Easter 1916 to the United Irishmen and women, to the Famine immigrants who risked everything on a coffin ship to attain freedom from the tyrannical landlords, we Irish know what freedom means and what it was to die for.

The Ukrainians are fighting and dying for their right to elect their own government, to salute the blue and yellow flag, to laugh, live and love in their own cities and towns, and rural areas, to have lively discussion, political argument, intense feelings. But always such differences stem from the bedrock principle that you are free to say what you like.

Instead, for wanting such freedoms they are being attacked with live fire by a Russian leader who is matching Hitler and Stalin for sheer viciousness. Nuclear reactor? Attack it with live fire and seek to terrify the watching world. Nuclear bombs? Threaten to use against anyone who will oppose them.

Maternity hospital? Bomb it. Refugees fleeing? Fire military ordinance at them. There is no end to the war crimes that have been committed against ordinary, decent Ukrainians.

Someday we can hope that like Hitler’s lieutenants, Vladimir Putin’s mobsters will be brought to justice before the International Criminal Court and that, unlike Hitler, Putin will be put on trial.  Let him face the loved ones of those he disposed of or killed.

Let him hear the heartbreaking stories of the refugees, but most of all, take freedom away from this sick little man. The Ukrainians deserve to see that day.

*This editorial first appeared in the March 16 edition of the weekly Irish Voice newspaper, sister publication to IrishCentral.