The truth about Trump the antichrist revealed to his fanatic followers

The madness and mayhem in Washington this week finally revealed the true nature of Donald Trump. 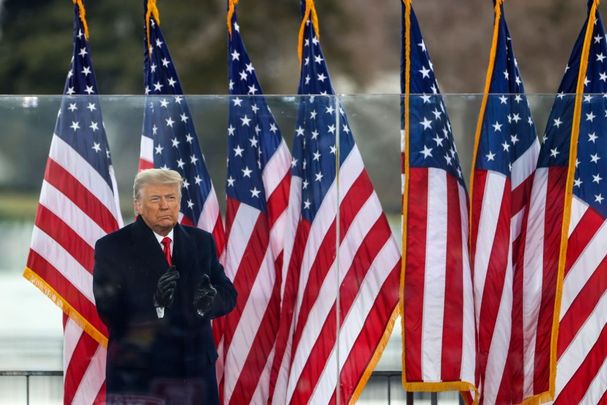 Democrats are calling on Donald Trump's staff to invoke the 25th Amendment and remove him from office. Getty

And so it came to pass in the final days of his presidency Donald Trump revealed himself as a fully flown fascist, ready to burn down the Capitol rather than accept defeat and concede the election.

As he strutted to the podium on that sixth day of January 2021, he clenched his fist and told them mobs and yobs arrayed before him that they must fight as an election had been stolen from them.

And verily they did, attacking the Capitol Buildings like the Israelites taking down the walls of Jericho. Their Joshua was Trump, their intent was to spread mutiny and mayhem.

And it came to pass that the two ugly sons of Donald, Eric and Donald Junior, promised to smite any enemy who did not accept Donald’s edict that war must follow the rigged election, While neither of his sons were elected to even a lowly position such as a dog catcher in Alabama, they took it upon themselves as their personal mission to defeat all enemies whose fealty to Donald wavered,

Somewhere, if only in the deep recess of their pea brains, they saw the Donald's Dynasty traveling long into the future and lasting longer than Methuselah whose reign was 968 years according to the Holy Bible.

And it also came to pass that the sons appeared nowhere at the battle but huddled with Donald watching the carnage begin safe and far away from the war.

And verily, the sister Ivanka called the fighting and murdering men “American patriots” on her Twitter machine before erasing it as the shame of the murder, mayhem and destruction of the property of the American people became obvious.

And it came to pass that the Yobos unleashed their passion for their beloved  Donald and charged as one heaving mass of humanity into the sacred inner chambers where the birth of democracy was once witnessed but which Donald wanted crushed.

Within those chambers, a police officer was killed, beaten in the head by a fire extinguisher and many rioters destroyed all the items they could find that represented this thing called democracy.

But the scale of destruction was so great and the fear-stricken elected members so terrified that it became evident the mob had been carried on a tidal wave of destruction, murder, hate and viciousness far beyond what even the great Donald had expected. Yet, even though he could have ordered more military with a wave of his hand, his hand stayed down.

Seeing the damage, people long lulled into a sweeping embrace of this cult leader suddenly woke up and found their worlds shattered.  Senior senators, tribunes of the people such as Ted Cruz of Texas and Josh Hawley of Missouri, who had himself offered a closed fist of support to the Nazis on his way into the debating chamber, suddenly realized what violence had been unleashed and yes, they denied it with vehemence so fake it qualified for the fake news of all-time category.

Even princes of the church like Cardinal Dolan in New York, a true Trumpian believer, understood how much the time was out of joint and the murder and mayhem out of control.

Then there were the thousands of other enablers who had always imagined they could manage the beast known as Donald and still advance their careers,

Alas, in the end too, they realized Trump was not a God but an anti-God with the mark of the beasts he led and encouraged to run riot.

And so it was that Donald has firmly landed in the ashcan of history as the worst president over his people ever and the mob realized they had followed a false prophet and the influencers shape shifted to becoming anti-Donald advocates. And somewhere in Siberia, the great Putin laughed loud and long.

And God saw that it was time and prepared the way for Joe Biden, a tribune of the people, whose very life was the example of a noble calling and who cared for all the citizens of America, all people great and small equally. Let us pray.