Yuletide in the neighborhood of Kilaloe, County Clare

It is a short, silvery way to Tipperary from our doorstep in Clare despite the message in the title of the fabled song claiming that it is a long way. Never mind that. 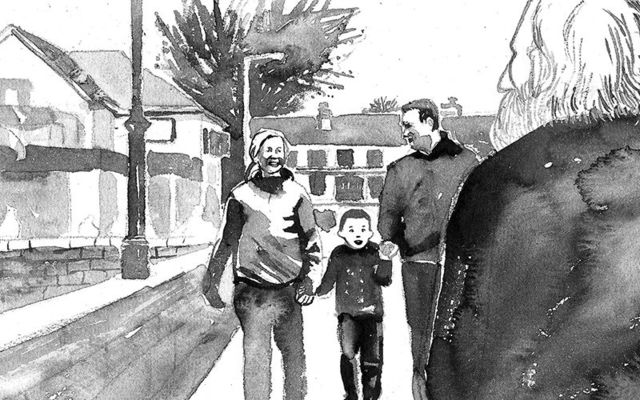 It is a short, silvery way to Tipperary from our doorstep in Clare despite the message in the title of the fabled song claiming that it is a long way. Never mind that.

The facts are that I walked into Tipperary from our home, and back again, no rush on me at all, in no more than 30 leisurely Christmas season minutes under a gently glowing moon. And it only took me two minutes to cross the bridge over the whispering Shannon that bonds and binds the sister heritage towns of Killaloe in Clare at one end of the bridge and Ballina in Tipperary at the other end.

It is always a special crossing, that one, any time of the year, but extra enjoyable when the festive season of peace and goodwill is well into its stride and the sky overhead is laden with as many stars as are glittering in the windows of the ancient stronghold of the great King Brian Boru of olden days.

We’ve only been living here for the past four years but, already, Annet and I feel more at home and at peace here than anywhere else.  The old High King who banished the Vikings with his victory over them at Clontarf bestowed on his descendants the immense gift of the kind of peace which adds an extra garnish altogether to the season of peace and goodwill.

The world outside, with all its wars and plagues and tragedies, somehow seems to retreat further away from our realities. The folk I met on the bridge over the Shannon all seemed to be smiling and genuine as they offered seasonal greetings and good wishes as they passed me by.  I did not meet more than a few who knew me by name either.

The one little lad in a Tipperary jersey who was very excited altogether to encounter me mistook me for Santa Claus, for obvious enough reasons, according to his parents with him, and we had a few minutes of craic and banter over the whispering river below because of that.

These bonded old heritage towns are very cosmopolitan nowadays, their citizens and visitors hailing from all over the world, mingling with other readily whilst also honoring and respecting their own cultures and spiritual beliefs.

Read more: Dublin named one of the best places in the world to spend Christmas

The little fellow who thought I was Santa Claus was actually born on Christmas Day in Germany seven years ago to an Irish father and a German mother.  Daddy was able to return home to Ireland when the recent recession eased and levels of prosperity and employment quite markedly improved.

The German mother told me during our Shannonside chat that, almost immediately after locating in Ballina, she felt more at home than she had ever felt in her native small town outside Berlin.  She said she would not wish to ever reside in Germany again.

That is heartwarming stuff to hear any time of the year but especially, I think, at Christmas.

Virtually every Irish town and parish I’ve lived and worked in all my life were mono-cultural strongholds of the old Catholic variety, and that was warmly pleasing in its own way too. Usually, everybody knew the breed, seed, and generation of all their neighbors, their virtues and their weaknesses, that sort of thing.

It was maybe a slight negative for “blow-ins” like myself that you would always be regarded in that light even if you became a 30-year resident of the community.

I’d not have believed that cosmopolitan citizenship such as that in these old heritage towns by the Shannon would have as much to offer as they do. I would have been as misled in that opinion as the ladeen who identified me as Santa Claus and told me strongly not to forget him on the big night in question.

Somehow, here on the edge of what you could call the Mild Atlantic Way, the sharp concerns of the political and economic spins and wheels of fortune and misfortune are easier to distance oneself from than elsewhere on the island.

I can’t really explain or understand that reality except by stating this is the first time today that I’ve thought of the ongoing Brexit situation in the so-called Mother of Parliaments in London, the first time I’ve been at all concerned about the statements of one Donald Trump whom ye all know well, or the dismal enough defects of our creaking national health and housing systems.

And effortlessly enough, I am going to put such matters aside under the Christmas moon over the Shannon and sit down with a hot toddy to watch on TV the sports stories of the day.

Can I leave it at that for now please? Enjoy it all safely, wherever you are.

Read more: How one little girl inspired a New York journalist to restore faith in Santa