As New York City's bars struggle, the Irish pubs of the once thoroughly Irish Queens enclave remain authentic and at the heart of the multi-ethnic community. 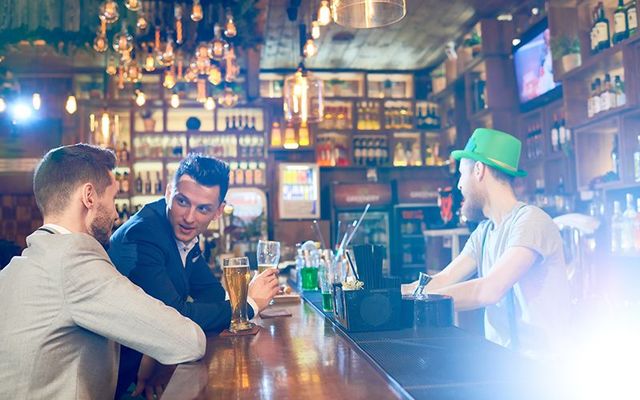 Irish bars in Woodside are still flying the flag. Getty

As New York City's bars struggle, the Irish pubs of the once thoroughly Irish Queens enclave remain authentic and at the heart of the multi-ethnic community.

A stout man with a grey mustache scoops up meat and potatoes from a smoking hot shepherd’s pie. Behind him, a Chinese couple shares a glass of whiskey and a table. A family shouts goodbye to everyone before leaving. Welcome to a typical Thursday night at the Copper Kettle, one of the many traditional Irish pubs in the neighborhood of Woodside, Queens.

For most of the 20th century, Woodside, with its 60 percent Irish population, has been known as Irishtown. These days, Irish residents are down to a meager 6.5 percent, while Hispanics constitute 38 percent of the neighborhood’s population, and Asians almost 33 percent traditional Irish pubs, however, with their wooden counters and old-fashioned signs, are at every corner. In a moment when most of New York City’s 2,000 pubs are struggling to keep up with rising rents and an increasing indifference to Guinness beer, Woodside seems to be a safe haven for Irish bars. The former ethnic enclave provides a strong support, and the traditional welcoming nature of the pub does the rest, attracting customers from diverse ethnic backgrounds.

Sinead Murphy, the cheerful bartender at Saints & Sinners, flutters around serving thick cheeseburgers to a crowd of firefighters who are in neat light blue shirts. Cops and firemen are regulars at her pub, but so are Irish-born, Americans, Nepalese and Tibetans. “They’re all friends now, so you see Tibetans coming in with two or three Irish lads and you’re like, what is happening,” says Murphy, smiling. “But everyone seems to be mixing very well, so it’s good.”

The success of ethnically marked businesses such as Irish pubs, despite the disappearance of the ethnic enclave, is not as puzzling as it first appears. New York City’s history is made of a succession of ethnic enclaves that assemble with every wave of new immigrants. The enclaves fade away once the immigration from a specific country trickles down and people integrate into American society. They tend to move out of the enclave, usually to the suburbs, to Long Island or New Jersey, as most of the Irish former residents of Woodside did. New people move in and the ethnic enclave disappears or is substituted by a different one. It is very common, however, for the ethnic enclave to leave behind its businesses and institutions. Most famously, Little Italy in downtown Manhattan has a cluster of Italian restaurants even as Italians have long moved away.

“Sometimes the businesses outlive the enclave by a very long way,” says Philip Kasinitz, residential Professor of Sociology at the Graduate Center and Hunter College of the City University of New York. “In fact, ironically, the business climate of an area becomes more ethnic as the area becomes less so. People may have moved out of the area, but they still have to go back to the area to see friends, to shop, to be involved in cultural groups, so sometimes it’s more important when people are leaving the area to make a big deal about the ethnicity of it.”

Paul Finnegan, who moved to Queens 35 years ago and is now the executive director of the New York Irish Center in Long Island City, remembers when the pubs were full of Irish people only. Now the Irish are spread out, but they are holding onto the businesses. New York City’s businesses tend to be ethnically marked too.

“I remember a time in this town when all the taxi drivers were Egyptians,” Finnegan says. “So, you’re getting into a taxi and it’s just happens to be a particular ethnicity. That’s their industry. It happens a lot here.”

Ryan McNally left Ireland a year ago and moved to Woodside. Despite the lack of an ethnic enclave, he swears to the authenticity of Woodside’s pubs. “They’re not the same as in Ireland, but they’re still very similar, and they’ve got a homely feel,” he says, “For example I know when I’m going to my local bar, even if I go on my own I’m going to meet someone I know there.” Irish pubs are welcoming places, and you don’t have to be Irish to be greeted as a friend.

“That’s like the winning formula about Irish pubs,” says Eileen Sprague, who was born in Woodside to Irish parents and spends her free time collecting memories from older Irish immigrants for the Queens Oral History Project, a collective memory project organized by Queens College. “They’re the place to go to meet friends and have fun and the friends become family because not everyone has a family in this country,” she says, “You establish friendships and your support network.

“That’s really to me what the role of the pub has always been and continues to be,” Sprague adds.

Read more: Finding loved ones before Christmas after decades apart

* Bianca Giacobone is a freelance reporter and student at Columbia School of Journalism. She was born and raised in Milan, Italy, and now lives and works in New York City. You can find her work on Medium, and you can reach her at bg2403@columbia.edu.

Republished with permission from the Irish Echo.