Escaping The Troubles and driving the wild Inisowen Pennisula road, the frustration, chats and locals. 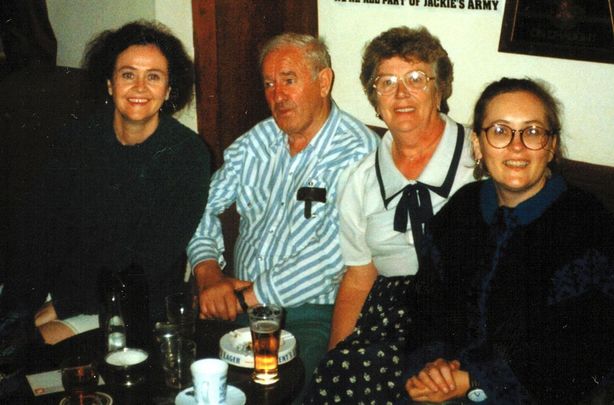 I’m sitting in the back seat of the old car on one of the wild rambles through Donegal with my father at the wheel. I’m hanging out the back window trying to get some fresh air and keep the car sickness at bay.

My father is like a mad tour guide pointing out spots of interest while driving past like a demon-possessed. The Inishowen Penninsula.... ”This is where your grandmother’s people are from – the Dohertys...”)

Occasionally he will pull over at a site if he knows I’m particularly interested, but mostly he will just fly by on his quest to find the next pub to quench his thirst.

When he does decide to stop, he’s like the Encyclopaedia Britannica, filled with fascinating detailed information about the area, including names, dates, and historical events.

I’m left filled with visions – an imprint of another age. Images of battles and blood-filled tales of vengeance, valour, and honor.

Sitting beside him, stoically smoking endless fags [cigarettes] is his childhood sweetheart Molly. The car is blue from the smoke and between the cigarettes and the countryside whizzing past at breakneck speed, my head is spinning.

Now you might think this is a terrible scene, but it was actually the best of times. We laughed so much when not arguing, engaged in long philosophical discussions, or extensive history lessons.

He bought the old beater after he and Molly decided they needed to get out of Strabane for regular jaunts across the border into the Free State.

This was before the first Irish Republican Army's ceasefire and the Good Friday Agreement, so it was still a time of uncertainty traveling around Northern Ireland – especially at night.

They would cross from the North into the Republic of Ireland at Lifford and away they would fly all around Donegal.

Once the car broke down with just the two of them on board and it was another great adventure. They held up a sign saying, “Strabane or Bust” and put out their thumbs to the occasional oncoming car to hitchhike their way back home.

They laughed and laughed about that one. The two of them in their sixties like the teenagers they had once been together before fate and necessity had parted them so many years before.

My father had left to meet up with his sister Margaret in Toronto and seek his fortune, while Molly stayed behind to marry the man of her father’s choice.

Time had given them plenty of life experiences – both joyful and sorrowful – yet here they were again, both free and unencumbered by the responsibilities they had carried and revelled in the freedom.

On this day, we were headed for Arranmore, an island off the coast of Donegal in the Gaeltacht with a population of around 600 souls.

Following another refreshment stop along the way, my father realized he could no longer drive so he appointed me chauffer for the day.

Fair enough. I stepped up and sat down in the driver’s seat and buckled up. Away we went, over hills, through towns, and around hairpin turns.

The car was a standard shift and I was quite capable as I drove manual transmission back home in Canada. The problem was that Tom, my father, wanted me to keep the same pace to which he was accustomed.

I would gear up or down to control the car as we entered curves or steep hills but he loudly protested and insisted I should keep the car in third gear all the way.

Now I was getting a bit nervous as I could only use the brake sparingly and the roads were very uncertain in places. I was unfamiliar with the territory but gamely did my best to comply.

There were moments where my heart was in my throat trying to appease his objections to my reticence, all-the-while trying to reach the destination alive.

As it happened both Molly and my best friend Sharon were in the backseat and as the journey progressed everyone in the car had suddenly become a co-pilot. There was a steady stream of directions, instructions, and general suggestions.

Interestingly, nobody else was able for the job. Neither Sharon and Molly had ever driven a car, and my father was drunk....so that left me.

By the time we reached Burtonport, I was on a slow burn –- silently seething at the end of my rope with frustration.

As we roared into the town, I was attempting to accommodate the various instructions about where we should park, when suddenly I heard deafening screams, “Stop!!!! You’re about to drive us right off the dock!"

(And, oh how I was tempted to floor it!)

Finally, I managed to park the monster and walk away over to the ferry. Everyone was in fine form, except myself who was dead silent.

When we embarked, I went off to a corner to sit alone and try to control the rage boiling inside.

It was a pleasant journey across the water and by the time we reached the island I was feeling just a bit calmer.

Upon disembarking, my father decided he needed another pint so we headed for the nearest and only pub on the island.

He always complained about how inconvenient it was when ferry services had no drinking facilities onboard.

In his mind, any cultured society would provide an opportunity for a man to at least have a whiskey while travelling. He would cite the French with their civilized and liberal attitude toward drinking.

So, we arrived at Early’s Bar on Arranmore, a little raggle-taggle group, and found a seat right beneath the sign reading “We’re All Part of Jackie’s Army.”

This, of course, referred to Jackie Charlton who was leading the charge at the 1994 FIFA World Cup Soccer with team Ireland.

The whole country had become infatuated with Ireland’s chances of winning and there were songs and posters everywhere cheering on the boys in green.

Anyway, we sat down and everyone ordered. I wanted a cup of tea. The barman looked at me like I had two heads or maybe just another one of those crazy tourists but, as only the Irish can be, he was willing to accommodate the strangest requests.

So we lapsed into pleasant chit chat about this and that until my father abruptly made a reference to the terrible day driving across Donegal.

That was it! I completely lost it right there and then.

I stood up and let out a wild shriek and roared right across the pub through the door identified as Mná –- Women: Meaning No Men Allowed! –- The women’s washroom.

Along the way, I passed the startled the barman who was on his way to our table with a tray containing a lovely little teapot and a cup of tea. He froze in his tracks.

I was hotly pursued by Sharon who dragged me right out of the pub for a quick little trot around the island and a tête-a-tête. By this time I was howling and crying loudly so really it was better that I leave the pub altogether.

Ever the diplomat, Sharon tried to reason with me but I was beyond sanity. As we passed the tourist shop I had another meltdown just as some German tourists emerged with bags filled with souvenirs.

The absolute shock on their faces was enough to bring me back to earth. As they skittered past us, Sharon said, “Just look at how you’ve terrorized those poor people.”

I entered with a little trepidation wondering what disaster I had left in my wake. As we sat down at the table my father looked at me like a contrite little boy. He had obviously been given a good talking to by Molly and nothing further needed to be said.

The barman exhaled with relief as I poured out that cup of tea and we resumed a friendly banter.

When we emerged from the pub there was a light drizzle as we headed back down to the ferry and it seemed a fitting end to the day. Cleansing and refreshing the Irish rain washed away any residue of bad feelings.

Our trip back was uneventful as everyone except myself fell asleep and I was happy to drive on toward the border to cross back into the North in blessed silence.