Why are so many Irish memes still about potatoes and drinking?

There’s only so many times you can hear jokes about how many pints you drink and how many potatoes you eat before it becomes not just irritating but plain boring. 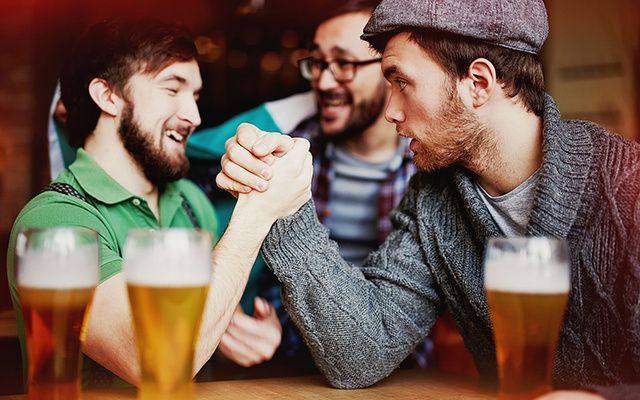 It’s time for a bit more creativity when it comes to mocking Irish people. There are only so many times you can hear jokes about how many pints you drink and how many potatoes you eat before it becomes not just irritating but plain boring.

Arguably, Ireland still does have a questionable relationship with alcohol, given that after 90 years of a ban on the sale of alcoholic substances on Good Friday a bill is now being introduced to lift it because, apparently, we can’t survive from one Thursday night to the next Saturday morning without a drink.

I also, honestly, rely on foods mainly consisting of potatoes to help me recover from those Fridays nights with no alcohol bans, so it can be said that some of us keep the old stereotypes going strong.

While searching for some good Irish-themed memes to share with our readers, however, we discovered that these two stereotypes, and the myth of Irish being a bunch of fighters and brawlers, are essentially the only memes available under “Ireland,” “Irish” and “Irish problems,” apart from one or two poking fun at our glorious history of stone-splitting summer weather.

Here’s a quick look at some of the worst offenders:

Printing a load of these out to wallpaper my Irish flatmates room.

So I'm from Belfast but I study in England

no need for a title

We appreciate that it’s good to stay safe with the classic old stereotypes, but if you really want to make us laugh, you’re going to have to delve a little deeper into what it means to be Irish and what traits we share with each other. We make ourselves so meme worthy, it shouldn’t be that difficult.

I mean, what other country would apologize to the victims of the Magdalene Laundries and yet still attempt to put a religious convent in charge of the National Maternity Hospital?

Who else would elect Countess Markievicz, the first women ever to be elected to the UK parliament, and then fail so dismally to offer female representation afterwards? In fact, the failure has been so complete that we have elected more men named John or Seán than women.

On a less serious note, where but in Ireland would you find an obsession with chicken fillet rolls, sausage rolls and Lucozade (British/Irish Gatorade), a love of a great Tayto crisp (potato chip) or ham sandwiches, and a strange love for Garth Brooks that has the country almost lose its mind over a few concerts in Croke Park?

Read more: Worst insults and racial slurs against the Irish

There’s also our innate ability to claim absolutely everybody successful under the sun has some kind of Irish blood in them yet losing our minds the minute the UK lays claim to Cillian Murphy – or whomever – as one of their own.

Why not look back into Irish history and find something other than the famine and potatoes to have a go at?

Irish republican mêmes are
Something Else pic.twitter.com/I1jWydyG1W

what happens when you look up irish pop culture memes pic.twitter.com/V0xV5xsCYX

these are the sort of memes that are shared by my Irish relatives on Facebook 🙄😒😂 pic.twitter.com/4N1qEKqTJJ

Or the Irish legend that is Liam Neeson?

RT AndreaFeczko: A8 My fave Irish actor is Liam Neeson. Without him, memes would be so boring #TravelSkills pic.twitter.com/w3uH9v3sOT

The horror of a summer trip to the bog is always a better call than the potatoes and drinking:

my favourite irish contribution to the Internet has to be these these bog memes pic.twitter.com/wILQa1AajV

Being an Irish dancer:

And there’s also plenty of Irish language examples showing how it can be done right:

mum sent this meme because all her facebook has is memes about being irish and I was not expecting much but christ pic.twitter.com/CX7CVg6p1v

So think outside of the box next time you want to use an Irish meme and ask yourself – are you just adding to an already jaded trend or do you have something new and actually meme-worthy!