Perhaps someone should make a ‘The Lives of Victims of Drunk Driving Matter’ t-shirt. 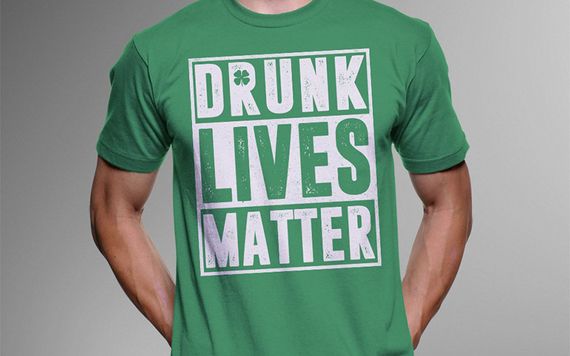 Elwood Gutshall III's blood alcohol level was allegedly two and a half times over the legal limit at which you are permitted to drive. The 44-year-old was spotted driving on March 19 and pulled over wearing the lurid green t-shirt.

Gutshall faces a preliminary hearing on May 26.

The slogan ‘Drunk Lives Matter’ parodies the Black Lives Matters campaigns and plays on the stereotype of the drunken Irishman or woman. A number of websites took heat for selling the t-shirts in the lead-up to St. Patrick’s Day.

Read More: This might be the most offensive St. Patrick's Day t-shirt yet

Online reviews of the $19.99 product were scathing, dubbing the t-shirt “offensive” and furthermore sold for an “offensively high price for a disposable bar crawl T-shirt.”

One Amazon reviewer wrote, “As an African American I CAN NOT give this any stars but I'm forced to give it one! I can't imagine what would allow you to think this was a good idea to sell!!! What could you be thinking apparently YOU WERE NOT thinking about your African American customers and how much this would hurt them!!! You are selling shirts that make fun of a slogan that has come out of the brutal killings of an entire race of people!!! Congratulations amazon good for you!!! I guess the next thing you will be selling is rope and seedling trees for lynchings. As a long time prime customer, I am deeply hurt and disgusted by this abomination!!!!”

However not everyone was upset and one happy customer declared, “Wore it to a bar crawl. Lot of positive comments. Pretty funny.”

It remains to be seen whether Gutshall will wear the offending item to court.