When will our current trial of moderation and radicalization end?

How 'The Trial of the Chicago 7' speaks to our era today. 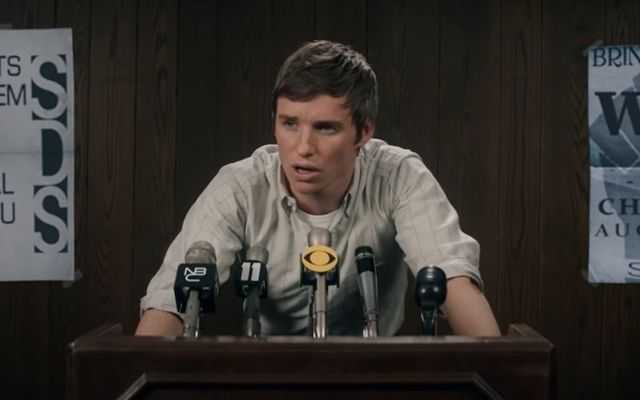 Eddie Redmayne in "The Trial of the Chicago 7" Netflix, YouTube

The entire acting team in the Netflix film The Trial of the Chicago 7 walked home with the Screen Actors Guild award for Outstanding Performance by a Cast in a Motion Picture on Sunday.

*Editor's Note: This column first appeared in the April 7 edition of the Irish Voice newspaper, sister publication to IrishCentral.

That should set Eddie Redmayne, Sacha Baron Cohen, and the rest of the crew in this drama up nicely for the Academy Awards on April 25.

The film, written and directed by Aaron Sorkin, is nominated for six Oscars, including Best Picture and Best Supporting Actor for Cohen.

For movie buffs and political junkies, The Trial of the Chicago 7 is certainly a movie worth seeing.  Based on actual events and set mostly in the aftermath of the chaotic 1968 Democratic National Convention in Chicago, the movie takes a long, deep, and surprisingly entertaining look at how these protestors decide to defend themselves in court, once the blood stops flowing.

Hayden and Hoffman both want to change the world. The deep question at the core of the film is, how are such changes best made?

Hayden, in the film, has radical beliefs, but also thinks there is a value to a certain level of respectability -- to being well-spoken, well dressed, and all that.

Then there is Hoffman. If the world is a courtroom, well, Hoffman is proud to be the jester.

Hoffman believes that, by 1968, the world has gone so wild and crazy that only radicalism served with heaping doses of absurdity could affect any kind of worthwhile change.

Cohen and Redmayne spend a good chunk of the film pleading their case in an effort to make America a more just and noble place, as young men continue to die in Vietnam, as the Civil Rights movement is met with threats of violence, and as the protesters from the streets of Chicago recover from their clubbing by police under the leadership of Irish American Mayor Richard Daley.

Whoever you agree with, it is Hayden who has something important to say to the kind of Irish American inclined to side with Mayor Daley.

As he noted in his memoir Irish on the Inside, Hayden grew up ignorant about his Irish roots. Only after becoming active in social justice circles did Hayden come to see this might be linked to his family’s past in Ireland.

It’s easy to dismiss such a “discovery” as a pose, or downright fake.

The Times of London has lobbed similar charges at Irish Americans in general, and President Biden specifically.

But is it really any better, or more “authentic,” to have folks who are unmoored from their immigrant roots finding identity in, say, white nationalist movements?

And whoever you voted for, is there really any doubt about the sincerity of Joe Biden's connection to his maternal Irish roots? (Yes, even if his middle name is Robinette.)

There is one more important way The Trial of the Chicago 7 speaks to our era. As written by Sorkin, this is a fight among dedicated lefty liberals.

But let's face it, the great fight over moderation and radicalism these days is taking place on the right side of town.

Hoffman is an angry prankster whose 2021 red-state counterpart surely would have stormed the Capitol. Possibly in a Viking helmet. And would offer no apologies. Like many Trumpian conservatives, they are showmen and they believe foundations need to be shaken.

These are the folks who didn't just dislike Barack Obama. They knew he was born in Kenya. And probably dug a tunnel from the White House to Nairobi.

Then you have the normies, who believe Viking helmets and QAnon have no place in the righteous but boring fight for tax cuts, and to end abortion.

One problem with The Trial of the Chicago 7?