I worry sometimes that Irish Americans come in two forms – the harmless leprechaun, full of silly cheer and stereotypes.  And those in whom we see nothing particularly Irish at all. 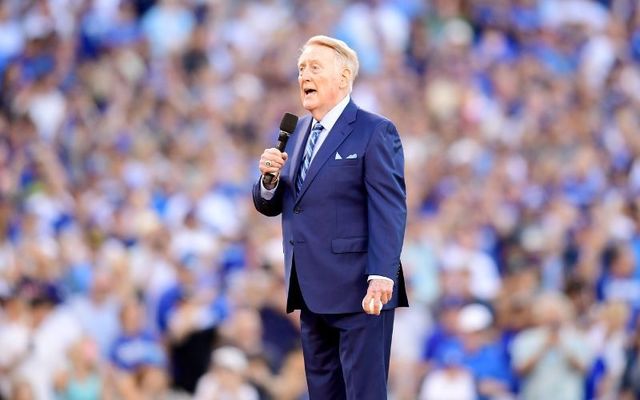 Vin Scully, the voice of the LA Dodgers, was the son of Irish parents from County Cavan. He died last week at the age of 94. Getty

Frank Doyle grew up in Brooklyn, and Brooklyn is cool these days. So you have to assume Frank Doyle is kind of cool, right? Not really.

Doyle didn’t have much money growing up.  But he had the Brooklyn Dodgers.

He went to the old Ebbets Field, nestled along Bedford Avenue, with “Jews and Poles and Irish, most, like Frank, the first in their families born in this country.”

Frank went on to become a bit of a success, which allowed him to marry well, and live a comfy version of the American Dream.

He never gets his drinking under control. He can’t resist the pull of a certain kind of pro-military, love-it-or-leave-it patriotism.

Then he tells a racist Barack Obama joke on national TV which makes him a national pariah.

Frank Doyle, I should mention, is a fictional character, one of the most important ones in Christopher Beha’s sprawling 2020 novel The Index of Self-Destructive Acts, a kind of Bonfire of the Vanities for the post-9/11 age.

Scully, who died last week at the age of 94, was the voice of the Brooklyn and then Los Angeles Dodgers baseball team.

Scully, like Doyle, was the first in his family born on the American side of the Atlantic Ocean. His parents came to New York from Co. Cavan.

“His father, Vincent Aloysius Scully, a silk salesman, died when Vincent was a child. His mother, Bridget, remarried, and the family moved to the Washington Heights section of Manhattan. As a boy he listened to the college football broadcasts of Bill Stern and Ted Husing, fascinated by the crowd noise over the airwaves,” read Scully’s New York Times obituary.

When Vincent Aloysius died, young Vin and his mother “crossed the Atlantic…to mend in Ireland,” Curt Smith writes in Pull Up a Chair: The Vin Scully Story.

“My mother told me later that when we came back,” Scully added, “I had a brogue you could cut with a knife.”

By the time Scully joined the Dodgers, moving from gritty Brooklyn to sunny LA, his voice was smooth, accessible.

Scully lost that Irish lilt. And he lost the sharp, confrontational edge so affiliated with New York City, the sidewalks of Bedford Avenue.

Is this a good thing or a bad thing?

I worry sometimes that Irish Americans come in two forms – the harmless leprechaun, full of silly cheer and stereotypes.  And those in whom we see nothing particularly Irish at all.

There are deep questions here, about immigration and assimilation.  It’s not like Scully would have been more interesting if he just told more stories about corned beef and cabbage, or the overalls in Mrs. Murphy’s chowder.

On the other hand, lots of people remain very comfortable serving up the likes of Frank Doyle as one of America’s biggest problems.  The fact that he is fictional only proves this point.  Author Beha could have given this none-too-pleasant character any background at all.

You would think being a working-class immigrant’s son would make for a certain level of sympathy.  And yet, for many people, this might actually explain his shortcomings.

Well, what do you expect from an Irish Catholic?

That really is the question, isn’t it?  What do we expect from immigrants and their children?

We talk about empowering them, celebrating them. And we do.

At least until they behave like Frank Doyle. Until they say and do dumb, mean-spirited, and hateful things.  Because they are human beings and that’s what humans sometimes do.

Or until they live another real-life version of the American Dream. And make it all the way to the Supreme Court. Only to think and vote like Samuel Alito, another son of an immigrant.

For a country with about 250 years of experience with immigrants and immigration, we still struggle mightily to figure out what we want from them.

But at least we keep trying.