Is the USA descending into Troubles-era Northern Ireland?

A couple of really smart dudes are worried that Trump America may be launching a Northern Ireland-style siege on the U.S. 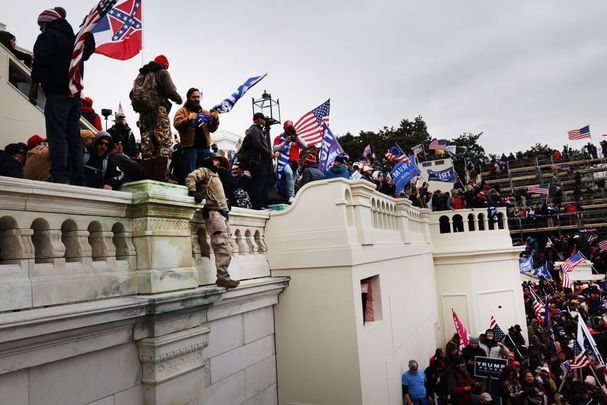 IF the thought of Tucker Carlson or Laura Ingraham in a balaclava is scary to you -- even if the Fox News crowd isn’t down with the whole mask thing -- you may want to stop reading.

A couple of really smart dudes are worried that Trump America may be launching a Northern Ireland-style siege on the U.S.

“While the country obviously has not descended to the level of present-day Iraq or Lebanon or Troubles-era Northern Ireland, these are ominously suggestive examples.”

That’s Jonathan Stevenson and Steven Simon writing in the latest issue of the brainy New York Review of Books.

Stevenson is a senior fellow at the International Institute for Strategic Studies, while Simon is a fellow (and quite the fellow, I’m sure) at MIT.

In the wake of the January 6 sacking of the U.S. Capitol, mainly by white dudes bearing Confederate flags and lots of guns, Simon and Stevenson pose the question: “How Can We Neutralize the Militias?”

They worry about an “armed and loyal far-right movement...driven by white supremacist and anti-government conspiracy theories, enraged by largely peaceful Black Lives Matter protests, and irritated by Covid-19 restrictions.”

All those angry dudes in Hawaiian shirts bearing arms could spell, well, trouble.

And so, we might take a hard right turn onto our own Falls Road.

“The unprecedented historical spectacle of the Capitol insurrection also looms as a durable tool of recruitment for far-right militias, so enforcement and prevention are paramount. There is a temptation to draft legislation more clearly defining domestic terrorism and strengthening the means to combat it,” Stevenson and Simon wrote.

“But...muscular new (laws) could even be politically counterproductive. When the Provisional Irish Republican Army rose to prominence in Northern Ireland in the early 1970s, the British government established an array of ‘scheduled offenses’ applicable to IRA militants that distinguished them from ‘ordinary decent criminals.’ This helped them burnish their status as ‘freedom fighters’ and -- once tried, convicted, and incarcerated -- as ‘prisoners of war.’”

I don’t know.  I look at Proud Boys founder Gavin McInnes and I see a guy who probably doesn’t even want to go on merlot strike, much less a hunger strike.

Nevertheless, in this equation, Mitch McConnell might turn out to have a new nickname -- Kentucky Gerry Adams.

American militias could end up with a seat at the table, just as Irish Republicans “gain(ed) political traction as principled revolutionaries through Sinn Fein, their political counterpart. The prospect of right-wing American convicts whipping up populist fervor through strategically calculated hunger strikes based on their POW status, as the IRA did in 1980–1981, is not an attractive one.”

Then these guys get real dark.

“Being effectively afforded special status as revolutionaries gave Irish republican militants both the political cover and the incentive to stage increasingly violent and politically provocative operations, such as the assassination of Lord Mountbatten and several members of Parliament and the near assassination of Prime Minister Margaret Thatcher. The proliferation of death threats to American politicians -- including (Nancy) Pelosi, Vice President Mike Pence, and others as the January 6 insurrection coalesced -- underscores the salience of this problem in the U.S. today.”

Let’s, for a moment, ignore that the population of Northern Ireland is about the same as the number of total votes Joe Jorgensen, Libertarian, received in the 2020 presidential election (1.8 million).

Let’s focus on one thing Messrs. Simon and Stevenson may be right about.

Too many anti-Trumpers like to depict these militia types as powerful protectors of a dominant “supremacist” culture.

But they actually often see themselves as a feisty, aggrieved minority.

That may not make them the new IRA.

It may make them even more dangerous.