Unions making a deal with the Devil by making nice with Trump?

"Trade and constructions unions were founded by immigrants who couldn't get any other jobs -- they weren't welcome in other trades… Immigration has always been an issue we have cared about, since we were founded in 1904, and it still is." 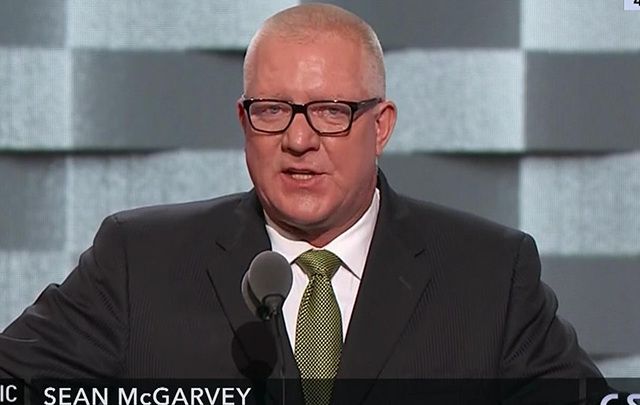 You can understand why Irish American labor leader Sean McGarvey would emerge from a meeting with President Donald Trump feeling heartened.

McGarvey is president of North America’s Building Trades Unions, and the new president has promised to build lots of stuff, from new roads and bridges to a “big, beautiful” wall.  McGarvey’s main job is to make sure the people in his union have jobs.

McGarvey initially supported Hillary Clinton.  That didn’t work out, of course, but it’s not unusual for a union leader like McGarvey to try and make nice with the guy in the White House.

Overall, however, anyone with any ties to organized labor who thinks Trump is going to solve more problems than he creates is only making things worse for working people in America.

I’m looking at you Carmine Cervini!

Sorry, don’t mean to pick on this 61-year-old employee at the upstate New York Momentive Chemical Plant, where hundreds of workers have been on strike for weeks.

But Cervini told the New York Daily News last week, “Trump promised to help America, to get us good jobs. Well here we are, fighting for our good jobs. I voted for him. I’m going to give him a chance.”

Momentive strike over, now hours of mandatory "Sensitivity Training" before they get back in! pic.twitter.com/34ERaaRiNf

Now, anything is possible, and Cervini’s open-mindedness is impressive, I guess.  Maybe four years from now we will be talking about how the Trump administration created millions of stable, well-paying, safe jobs which offer great health benefits.

You know, the kinds of jobs unions helped create over the past century or so.  (And, yes, full disclosure, of course I’m a union member.)

It seems more likely, though, that Trump -- and the hyper-capitalist cabinet he has assembled -- will simply behave like the millionaires and billionaires they are.

Look no further than Momentive Chemicals!

As the News noted, “In 2007, private equity investors” -- including Trump’s jobs czar Stephen Schwarzman -- “took over Momentive Chemical, and since then the plant has driven down wages, cut health care coverage and attacked pension and retiree benefits.”

That’s what you voted for Carmine.

In carrying out its agenda, it is possible the Trump administration may incidentally or temporarily improve the economic outlook for some union members.  And no, unions didn’t exactly flourish under President Obama.

But as a whole, organized labor -- a traditional Irish American stronghold, which gave millions of immigrants and their children a step up in America -- will be hurt, not helped, by Trump.

Do you honestly think Trump would oppose the so-called “Right to Work” law currently up for debate in New Hampshire?  The kind of anti-union law Republicans have passed in numerous other states already? Do you honestly believe Trump cares about the things for which unions advocate -- dignity, safety, quality health benefits?

If you don’t belong to a union and don’t care about those things and voted for Trump, fine.  I would point out that your parents or grandparents probably got a leg up from organized labor, but if you think history doesn’t matter, oh well.

But union members themselves need to do some soul searching, because Trump did quite well with organized labor back in November.  Why?

Because they bought into Trump’s anti-immigrant culture war, a divide-and-conquer tactic that has been working among the Irish and other white-ethnic workers since at least the Nixon years.

As for me, the Irish American I would listen to is Mike McGuire, political director for Mason Tenders District Council 9 out of Long Island, who recently told the Daily News, "Our union and many other trade and constructions unions were founded by immigrants who couldn't get any other jobs -- they weren't welcome in other trades… Immigration has always been an issue we have cared about, since we were founded in 1904, and it still is. Many of the city's construction workers are immigrants and our attitude has always been that it's better to welcome them in than try to keep people out.”