"Does life imitate art? Does art forebode life?.. Here are the facts of the situation atop my Clare fence." 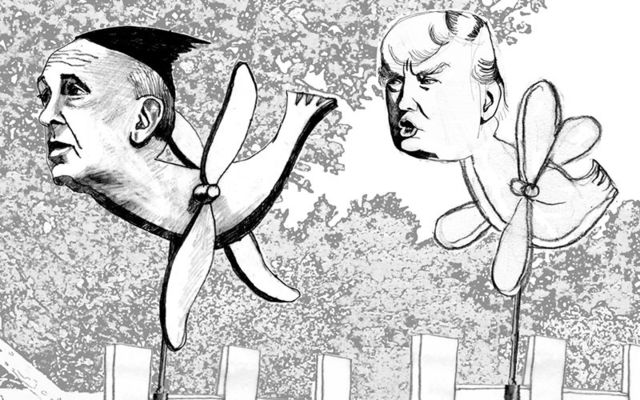 The Trump and Pope Francis in a garden in County Clare. Caty Bartholomew

"Does life imitate art? Does art forebode life?.. Here are the facts of the situation atop my Clare fence."

Another surreal midsummer yarn for ye today from Clare and the west as our heatwave continues apace and we celebrate that by staying in the shade as much as possible because, as many of ye know from birth here down the decades, we were not bred for this kind of climate. It is a kinda miracle of a summer thus far and, believe it or not, my resident county of Clare got the most sunshine of all during the last two months.

Leaving that pleasant climactic reality aside for the moment, I simply have to deal again now with the special wooden whirligigs which my good friend Dennis C. Winter supplies me with from time to time from Kingston in New York and which, as regular readers know, I mount on my garden fence here in Shantraud in Killaloe and christen with a name and fame.

Several times during the last 18 months I have faithfully reported on the antics and performance in the earthly winds of the first pair supplied by the talented Dennis whom I christened Donald and Hillary as your election campaign waged hotly just over a year ago. Caty Bartholomew illustrated the pair months ago in this space as I reported faithfully and factually how they fared in the world of reality.

Again regular readers will be aware from those reports and Caty’s fabulous illustrations that Hillary was quickly blown away off the top of the fence totally, and, despite being replaced several times was eventually donated to a good neighbor for rehabilitation.

Meanwhile the larger and sturdier Trump whirligig, despite being sometimes enmeshed by the long arms of our resident ivy and roses, somehow strongly and stubbornly survived. Even thrived.  I observed him this evening, which was brisk enough, when I was mounting Dennis’ latest gift whirligig about a yard away from him, and this, accordingly, is the latest bulletin.

Does life imitate art? Does art forebode life? That is too profound a question for a simple peasant mind like mine but, for what it is worth, here are the facts of the situation atop my Clare fence.

You see, shortly before the Pope is due in Ireland for a huge state occasion, Dennis informed me that his compact new whirligig, clad in scarlet paint, is in the form of a cardinal bird!

I instantly christened him Pope and was amazed, once mounted, that the Pope whirligig instantly turned his head away from Donald and crouched low on the fence with both wings whirring in an agitated fashion. The Trump whirligig, on the other hand, if anything became even more truculently active.

Again, as I have reported here before, the Trump icon, for months past, flies only with his right wing.  The left wing has not stirred for months past but the right wing does the work of two. There was also a tweety kind of sound from that hardworking right wing.

I swear all of this is accurate reportage and not fake news. But am I reading too much into the behaviors of Dennis’s special whirligigs?

I cannot answer that question. Judge for yourselves.  I promise to faithfully and fully report on events atop my garden fence through the rest of the summer.

Meanwhile, it is a real fact that the impending visit of the real Pope Francis to our shores is exciting much less popular interest and excitement in this new and infinitely more secular Ireland than that of Pope John Paul a few decades ago now, so maybe the agitation atop my fence from the newly installed icon does indeed hint at a true mortal reality.

It is reported that our openly and proudly gay Taoiseach Leo Varadkar will discuss the thorny enough issue of same-sex marriages with Pope Francis at their first meting in Dublin shortly. That would not have been on the agenda of the last papal visit for sure. More later on that front.

I do get it right sometimes despite being a bit cracked in the head. Some weeks ago here I said that Irishmen should be ashamed they do not perform as well on the global sporting scene as do our ladies.

We had clear proof of that this August when our amazing hockey ladies came home to a huge warm civic reception following the incredible performance in their World Cup in London. They were the minnows in the pool but came home with silver medals and genuine glory.

Well done to them all. That was great stuff altogether. We could do with a lot more of that kind of global success.

Can I go out now into the Clare night for a midsummer pint? Please say, “Yes, Cormac.”