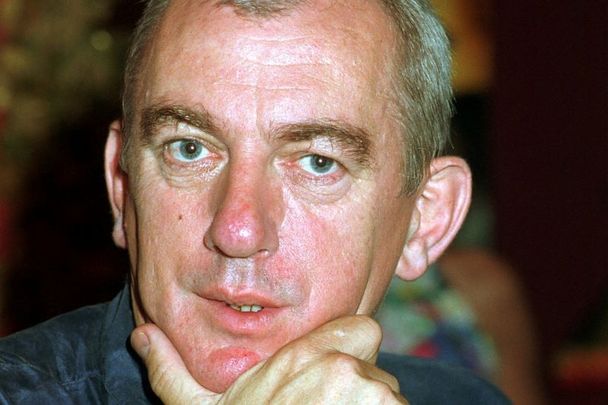 Shay Healy at the opening of Mr Pussy's in 1994. RollingNews.ie

Irish broadcaster, journalist, and songwriter Shay Healy passed away on April 10, 2021. Here, Larry Kirwan, the longtime frontman of Black 47, remembers his friend upon his passing.

I don’t know when I first met him, probably at some gig in Wexford. He was the folk correspondent for New Spotlight Magazine, the bible for all wannabe musicians back in those days.

He once told me that when I arrived in Dublin I still had hayseed in my culchie hair. He was funny and scathing beyond belief, irreverent too in a country dominated by an autocratic church and an endless series of political buffoons.

Still, deep down Shay was deadly serious and aware of life’s intrinsic randomness. But, oh, could he write a great song!

I missed his glory days at the 1980 Eurovision Song Contest when "What’s Another Year" won, but I heard about his exultation and excesses. The title came from a line his father used to sum up his desolation at the loss of Shay’s mother.

That was Shay all over, forever mixing the sacred and the profane, but always in a kindly way. My favorite early song of his was "Funny in a Sad Way." Did that sum him up – no way! Shay could also be big and blustery when the occasion was called for, which was often enough. One thing about him, the guy sure knew how to live life to the fullest.

He came crashing back into my consciousness when he arrived in New York to film Green Cop Rockers, a vivid documentary about Chris Byrne, the co-founder of Black 47. What a blast to hang out with him again as he captured the blazing arrogant nights and sweaty performances of a band on the rise, but already sure of itself!

As a parting gift, he presented us with a video of "Banks of The Hudson" that captured so well not just the song, but the streets and characters of our hometown before Giuliani whitewashed over the beating heart and soul of the joint.

Some years back, after he had contracted Parkinson’s, he sent me a song that floored me – "When You Become Stardust Too." It became an instant classic on Celtic Crush.

Though it dealt with the flimsiness of life and the inevitability of death, it left you with the twin feelings of hope and optimism. That was Shay all over – he could stop the world in its tracks with a few poignant well-chosen words. His performance of the song was also stunning: though you could tell he was ill, yet he used that vulnerability to burrow deeper into the meaning of this timeless classic. It was voted #1 by Celtic Crush listeners in our last Top 100 Songs. I took such pride in telling him about his achievement.

He barely responded. He was already on to his next assignment for me – to read a memoir of his days spent on the Lower East Side when he came to New York to “make it” as a songwriter and performer. He was far from a young man, yet he threw himself into his new life with gusto. Though he missed his wife and children desperately, he had an itch to make it here, and he was determined to give it his best shot.

I gave him my honest opinion - that he had captured the hustle of our streets and culture in a way only an outsider could, but in doing so he had become one of us, and that he should persevere and finish this fine work.  It would not only add to the tale of our city, but jumpstart a new chapter in his life.

That was only some months ago. I never heard back. I guess I know the reason now. He was getting ready for his trip to become stardust too.

We’ll miss you, Shay.  Like many remembering you today, I count myself lucky to have been a small part of your world. I can only imagine your ribald remarks when you find yourself sharing the obituary page with Prince Philip.

For humor, honesty, and a crooked way of looking at the world, there was no one quite like you. That you were full of love and talent only added to the mix. And to think you wrote a classic too. Safe travels, a chara. You left the world a better place.