Liz Moore's new novel, Long Bright River, is based in Philadelphia a city struggling to cope with a drug crisis now faced with the coronavirus pandemic. 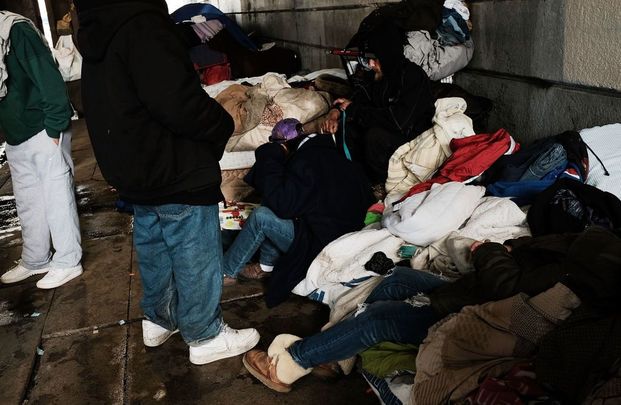 Opioid laid bare on the streets of Kensington, Philadelphia. Getty

Liz Moore's new novel, Long Bright River, is based in Philadelphia a city struggling to cope with a drug crisis now faced with the coronavirus pandemic.

Back in January, a report in the Philadelphia Inquirer put it bluntly: “Philadelphia is home to the worst urban opioid crisis in America.”

The newspaper added, “More than 3,000 people have died of drug overdoses here in the last three years, and the city health department estimates that tens of thousands of Philadelphians are addicted to opioids.”

That report was published on January 21, the very same date the Centers for Disease Control confirmed the first case of coronavirus on U.S. soil.

In the weeks that followed, a city already struggling to cope with one crisis had no choice but to confront another.

“Kensington has a very high number of unhoused people, many of whom lack the resources that would enable them to take recommended precautions such as wearing masks and avoiding group settings.  This means that a high-risk population is at even higher risk at the moment,” Liz Moore tells me, referring to the North Philly neighborhood that serves as the setting for her recent, riveting novel Long Bright River.

“It also means that those who serve the community are themselves at higher risk every day, but are making the selfless decision to continue their lifesaving work.”

Moore is referring to the likes of Irish Americans such as Johanna Berrigan and Father Michael Duffy, both of whom work out of St. Francis Inn on Kensington Avenue, “a soup kitchen that is run by Catholic nuns and friars and has served meals three hundred and sixty-five days a year, without fail, since 1979,” The New Yorker magazine recently noted.

On March 17, St. Francis Inn even served up corned beef and cabbage meals, albeit of the grab-and-go variety, in order to maintain social distancing on St. Patrick’s Day.

Liz Moore was born in Boston and lived in New York before moving to Philly.   Her latest book makes it clear she has made that city her own.

Long Bright River is about deeply troubled, deeply complex people, many of them Irish American, living in a part of the city that’s about a whole lot more than Rocky statues and cheesesteaks.

Most notoriously, the “K&A gang,” predominantly Irish American, named after the street intersection of Kensington and Allegheny, was a major organized crime player in the decades after World War II.

In more recent years, places like Kensington had to confront new challenges.  Moore’s book is a thriller and family saga, but it also vividly chronicles the fallout from America’s opioid addiction crisis.

Moore was drawn to St. Francis Inn and the likes of “Father Mike,” as well as Natalie Weaver, who were providing crucial services to those in desperate need.

“He's really a force in the neighborhood,” Moore said of Father Duffy.

The coronavirus, of course, has only made north Philly’s challenges even more daunting.

The New Yorker characterized the staff at St. Francis as “well-acquainted with the difficulties of meeting human needs during a crisis.”

Berrigan, for example, “traveled to Iraq, in the nineties and early two-thousands, to document the impact of economic sanctions on its people, and helped provide care in Haiti in the aftermath of the earthquake that devastated the island in 2010.”

And yet, the magazine added, “They had never seen anything like the coronavirus.”

Philadelphia, of course, is no stranger to such adversity.  It was hit particularly hard by the Spanish flu epidemic 100 years earlier.

Yet it blossomed into the kind of place that beckoned the likes of Moore and Father Mike. It’s certainly going to be one of the first places I head back to when this whole thing finally ends.

And while neither cheese steaks nor corned beef may be my first choice when it comes to Philly cuisine, whatever I eat, it will NOT be grab and go.

I will sit. And I will savor this city that I miss so much.