Contributor James Mahon chats with Oobah Butler about his rise to fame. 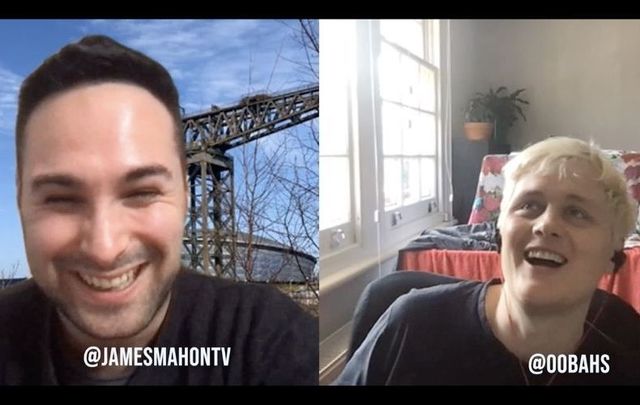 A journeyman career in sport usually describes an athlete who has worked his way up over time and through sheer grit and determination and breaks through despite competing for multiple organisations.

Oobah Butler is the ultimate media journeyman of the 21st century. Irish journalist James Mahon talks to the new host of Catfish on MTV UK and how his family roots in Mayo remain close to his heart.

From a working-class family of six children in Birmingham, Oobah Butler has done it all, been a musician, a barman, and even worked in a car factory, but to hundreds of millions of people around the world, he is the Youtube star of Vice UK.

“I am a best-selling author and a filmmaker” but it is hard for Oobah to describe his job, “What do I say, it’s really hard to explain to a relative, an older relative”.

His world turned upside down in 2018 when the Shed at Dulwich made him the UK’s biggest viral star.

“When the Shed happened it was an absolute storm” but it finally allowed his family to understand what it was he did. “When I went on Good Morning Britain, my mom had something to point towards, he went on that thing, so what is he a liar?”

Butler is sharp, funny, and warm as we chat through Skype about the highs and lows of a career that have seen him struggle.

“After Brexit, I lost my job as a copywriter for Wowcher” but the determined Butler didn’t give up. “Vice took a shot on me thankfully they did”.

Despite selling thousands of copy of his debut book How To Bullsh*t your Way to Number 1 and being recognised across the globe, he isn’t a wealthy man, “It took a long time for money to arrive, I retained rights, the things that come after, you can do other things”.

He explains how his family support and belief always kept him grounded and he remains close to his father whose roots are from Ballyhaunis in County Mayo. Butler explained he wants to go back and learn more about where his ancestors came from and enjoyed his time on location in Belfast and Dublin prior to Covid.

Despite the pandemic, Butler continued to produce engaging and fun content and interact with his legions of loyal social media fans and MTV came calling to launch Catfish UK, “I am so happy to be doing it, Julie is amazing, it’s wild”.

Butler has turned down previous TV projects but explained MTV Catfish UK was the show for him and is excited by what it will bring to audiences of all generations. Butler in response to a social media question from Zuza Kapitula about where his inspiration comes from answered,  "I do come up with my ideas myself, I always sound them with friends, talk about in a pub, you can see by their faces."

Before the smiling and deep thinking journalist and I part ways, Butler explains that he is always trying to evolve, “People might get sick of me but I want to continue to make things that entertain and shock and that are unique, I have a feature doc and a couple of shorts I am working on”.