Netherlands leads the way when it comes to green energy

While farmers have similar economic woes to their cousins in Ireland, the Dutch have shown us the future when it comes to windmills and hybrid vehicles. 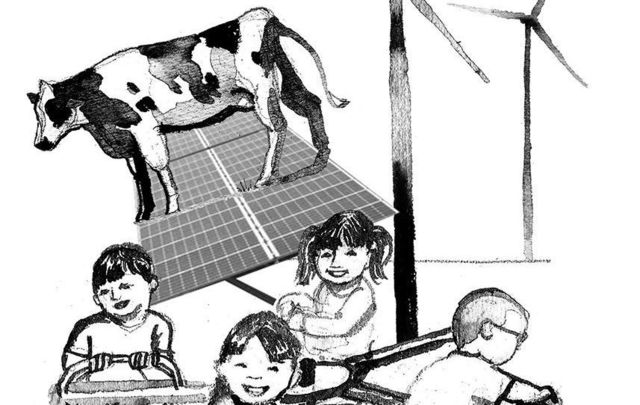 When it comes to farming, energy and fighting climate change the Netherlands is miles ahead. Caty Bartholomew

While farmers have similar economic woes to their cousins in Ireland, the Dutch have shown us the future when it comes to windmills and hybrid vehicles.

I was in The Netherlands over the earlier stormy reaches of last week that was battering farming communities everywhere in Europe and further afield. The occasion was a family gathering of my Dutch wife Annet’s clan to honor their older generations, all daughters of the flatlands of the Gelderland region, all of the traditional farming stock in that region up against the German border.

And if I was disgracefully late in reporting back to our noble editor here (and will probably be sacked as a result!) it was because of some of the amazing tactics I observed with shock and awe during my trip. And that for sure is the truth.

Traffic in the region around The Hague was made chaotic for a visitor like myself, trying to catch a flight home from Skipool Airport in Amsterdam, by the solemnly slow cortège of huge tractors which effectively choked the motorways of the nation as the Dutch farmers demonstrated their ire against all the economic elements which Irish farmers are demonstrating against here at home even as I write.

I missed two flights home as a result and that’s also the pure truth. But I nevertheless, in the midst of all my logistical problems, ferreted out some intriguing examples of the different ways and means in which our Dutch colleagues of the farmlands are responding to the range of threats to their future posed by the internationally successful campaign by tomorrow’s generations against the way in which our climate is being toxicated and poisoned by the failure of governments about everywhere to take the remedial steps urgently needed now to keep earth alive.

The great cortège of tractors invading the cities of The Netherlands were, I suppose, following the same kind of approach taken here by the picketing of the meat processing plants up and down the land to protest against beef stock prices in particular and the threat to the future generations of farmers and their communities by the suggestion that farming practices contribute more than their share towards the erosion of the atmosphere that sustains human life here.

That’s an issue which is somewhat beyond my limited ken, in all fairness, but when I destroyed the peace of my (hard-earned) short vacation by doing a little journalistic digging of my own, and when I kept both my eyes and my ears open, I have to say I remembered an old saying of my father’s which ran, “In matters of commerce beware of the Dutch. Because they proffer too little and expect too much!”  Again the quality of that assertion is a little beyond my aged brainpower at this stage.

What I did learn accurately however, to my significant surprise, was the reality adopted by many farming communities already in this fertile region in the east of the Netherlands. Great numbers of farm families, after generations of producing milk, beef, and other meats from their holdings, have now ceased that tradition entirely.

Many have turned to tillage, for example, so that the flat paddocks where cows and bullocks grazed down the centuries are now sown with crops of a wide range of vegetables and fruit.

But there is also a growing trend towards, for example, facilitating the widespread installation of acres of solar panels to generate power which does not corrupt the skies above in the way the cattle allegedly did in their heyday. And that is the pure truth too.

The old windmills which are associated with The Netherlands also are few and far between, mainly as tourist attractions I think, and have been replaced by acres of those grey modern turbines which, in all fairness, are also beginning to appear in greater numbers on the Irish skylines and horizons.

But I was most amazed altogether by something which none of my sources revealed to me directly or even hinted at during my trip, because they are as cute and canny as anyone born and bred along this increasingly Wilder Atlantic Way from Donegal to the tips of the toes of the craggy Kingdom of Kerry and Cork.

They are aiming for a situation where they will be praised (and rewarded financially of course!) by the rest of us by totally ridding their cities and towns and motorways of vehicles powered by petrol and diesel engines, with the resulting unhealthy smoggy atmospheres fueled by the emissions from same.

Already they are using sharply increasing numbers of vehicles either powered totally by electricity or those hybrid vehicle systems which use the minimum of fossil fuels to charge themselves. Unlike in Ireland, they have the populations to create the demand for a national network of charging points to ensure there is always a charging point nearby on even long journeys, and that is quietly happening quickly by the day and week. Another pure and I presume purifying truth for tomorrow’s Dutch generations.

And, of course, historically the Dutch have always boasted the highest number of pedal cyclists in the western world. The cycles, by the tens of thousands, already occupy more space in the parking areas of towns than the diminishing number of cars one sees there.

But I was truly shocked and awed and impressed to the point of being rendered speechless by a sight I saw in a tourist town in that canny Gelderland district just before I had to leave. It is crucial for Netherlanders of course, to ensure that the battalions and brigades of their millions of cyclists of all ages never diminishes in numbers in the years ahead.

I swear on my oath I saw toddlers being attached by their parents and guardians to pedals fitted to immovable great steel poles beside the cycle parks. They had little helmets and saddles under their bums as they cycled away without moving an inch, getting loud praise from their adults the while. Such a contrast to the Irish realities of most of our childhoods everywhere along the Four Green Fields!

We could not wait for the day when we could dump our old High Nellies and graduate, at the very least, to a moped or motorbike or scooter as we dreamed of soon having enough cash and experience to buy an old battered car, older than ourselves, which snorted and snarled along our roads of yesterday while emitting clouds of exhaust fumes.

In the near future, when diesel and petrol engines will be virtually totally barred from our streets, the Dutch are likely to be as proud as Punch at what they have achieved through taking the long view of the situation.

Read more: Smell of an open fire in Ireland is intoxicating but what is Irish turf?