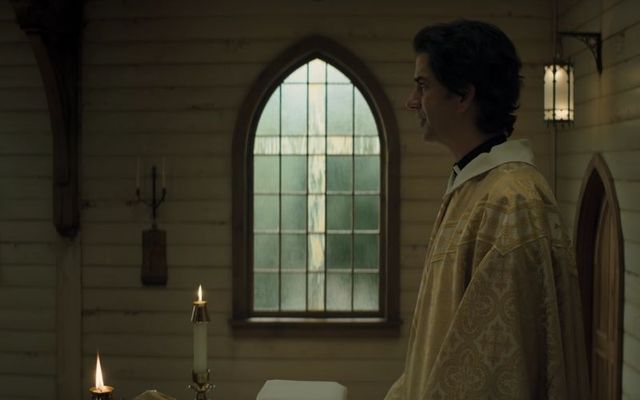 CROCKETT Island is an isolated little world, filled with neighborly folks named Flynn and Riley, and even a kindly, new priest.

Then there’s Brooklyn, which is also an island, and also has a new priest. A new bishop, as a matter of fact, an Irish American born in the Bronx named Robert Brennan. He is replacing the retiring Nicholas DiMarzio, who is retiring after nearly 20 years on the job- and after, as a New York Times headline put it, the Vatican cleared him of sexual abuse.

Anyway, the new guy might want to spend some time thinking about his vision for Catholicism in the 21st century.

And looking, first, around the island he is going to be working on, Brooklyn. It has a couple of million people and is connected to Queens and Long Island, which adds several more million people.

These folks can be, um, temperamental.  Also angry and bats*** crazy.

At least that’s what you learn when you get a few episodes into the new Netflix series Midnight Mass. Which is about the time the whole show goes off the rails.

The first few episodes are not all that bad. But then it gets messy, and that’s got nothing to do with all the bloody fangs.

It has to do with the fact that we’ve seen this way too many times before -- creepy stories about hypocritical, narrow-minded Catholics who devour noble outsiders. Even if those outsiders happen to inhabit the same picturesque little island.

This is not to say the church and many of its leaders and devotees don’t deserve such criticism. Just look at the headlines.

But Brooklyn’s new bishop deserves a reminder that Crockett Island isn’t the only Irish American Catholic inspiration out there.

Just across the Harlem River, from the Bronx, is Morningside Heights in northern Manhattan.  That’s where Fred and Madeleine Rice, devotees of Dorothy Day’s Catholic Worker movement, were living in 1930 when they gave birth to a daughter named Megan.

All Megan Rice would do with her 90-plus years on this planet is travel all over it, trying to make it a more just and peaceful place.

Rice became a nun and peace activist.  You didn't have to agree with her tactics to admire her tenacity and commitment.

Rice died at the age of 91 earlier this month.

Prior to that, she’d been “arrested more than 40 times for protesting America’s military-industrial complex,” The New York Times noted.

And “most spectacularly” she broke “into one of the world’s largest uranium storage sites” with two fellow activists, at the age of 82.

“Please have no leniency on me,” Sister Rice said during the trial that followed. “To remain in prison for the rest of my life would be the greatest honor you could give me.”

Then, back in Griffin’s native borough, there is the South Bronx, which has been synonymous with a certain kind of poverty and depravity for decades.

It is also the setting for an inspiring new book in which yesterday's immigrants team up with today’s and try to actually do something about the Bronx problems so many people merely talk about.

The book is called The Kingdom Began in Puerto Rico: Neil Connolly’s Priesthood in the South Bronx, by Angel Garcia.

Connolly died in 2017, but the thriving community he played a role in building up lives on.

As Eileen Markey noted in a recent issue of America magazine, Connolly looked to organizing “methods then ascendant in Latin America,” then “put lay and religious women in positions of authority and launched a pastoral training center that brought people from around the archdiocese to the south Bronx to learn how faith could be harnessed to action.”