Bláthnaid Giles is bringing Dorarcas, Odhrans, Tadhgs and Meadhbhs together to celebrate their Irish names. 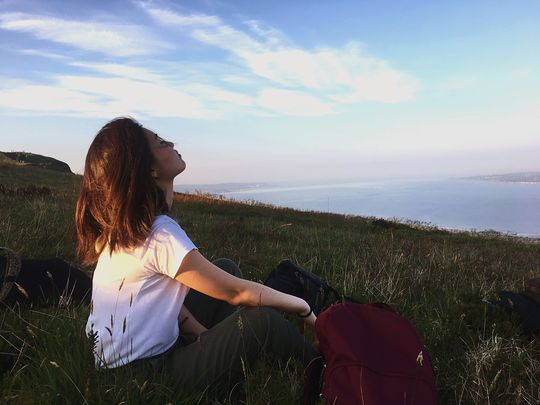 Learning to love your Irish name: "Oh, you want me to spell that for you? No problem!" Getty

Having a hard-to-pronounce Irish name is no picnic here a blogger called  Bláthnaid explores the difficulties, questions, and humorous moments that arise when you have a name with just TOO many vowels!

Editor's note:  There’s often confusion over pronunciation, spelling, and let’s not even start with the ordeal of ordering a coffee at Starbucks with an Irish name. Bláthnaid Giles, from Ardcath in County Meath, understands this. But she also thinks unique Irish names are worth celebrating. On her blog, "What’s me name?”, Bláthnaid (pronounced “Blaw-nid”) is bringing all the Dorarcas, Odhrans, Meadhbhs, Aoibheanns, etc. of the world together to share their stories. The blog features fun Q&As with each interviewee – some of whom Bláthnaid knows personally, but many of whom she simply reached out to online.

Here Bláthnaid writes about learning to love her name, the inspiration behind her blog, and a few of her favorite interviews.

I’ve always had a love/hate relationship with my name. I hated it when I was growing up and always wondered why my parents didn’t choose a 'normal' name that everyone could pronounce. I even called myself Rebecca when going to meet some of my cousin's friends just for the fear of having to repeat it and pronounce it phonetically over and over again.

As a kid, you want to fit in, and I kind of resented having such an unusual name. My parents were stuck on either Bláthnaid, Bláithín or Megan when choosing my name, and I would always ask my Mam, "why didn’t you just go with Megan?" However, I’ve learned to love it and appreciate that my parents chose such a Gaelic name, seeing as they both had no connection with the language. My brother is called Tadhg, so I guess they just have a fondness for Irish names.

I got the idea for the blog when I came across another Bláthnaid on Instagram and wondered if she had the same problems as myself growing up. Starting off with friends, I decided to get their thoughts on living with a 'tough' name. I then moved on to mutual Facebook friends and random people on Twitter. I used some of the Irish baby name websites for inspiration, then searched for the names and contacted people requesting interviews. After gaining some steam, I have had people contact me asking to be featured on the blog.

At first, I thought the project would only appeal to a niche audience and was primarily doing it for my own personal interest, however, I soon realized that a lot of people are connected in some way to 'difficult' names - either their friend or a family member has one or they just like reading the funny stories involved, the appeal was far more widespread than I first assumed. Maybe it’s an Irish thing, similar to our fascination with the weather, but people are intrigued by unusual names. It’s not just in Ireland of course but also abroad. It’s a great ice breaker and usually follows with the questions "what does that mean?" and "how do you spell it?" A great example of this was mentioned by Garbhán, who met a girl while studying in Sweden and she liked his name so much that she called his parents to tell them.

A friend contacted me about a subject that was being discussed on a popular Irish radio station on 'weird' names, so I emailed them and told them about my project. I was pretty shocked when they asked to interview me on air, which was a major stepping stone for my lil’ blog! The success of it is, of course, down to the people I interview and the fun and interesting stories they’re willing to share. I’m always excited to see people’s responses and there’s usually some type of story or fact which I can relate to.

I found that there are only so many ways of asking about a name, so some of the questions are repeated, but the answers are never the same. One of my favorite questions is the 'Starbucks question' where I ask people to give the worst attempt Starbucks has made of their name. The best one I came across is from Padraig, which is relatively common in Ireland, who got a cup back with the name 'Magic' written on it... The most unusual name I have come across so far is Dorarca, which is native to Valentia Island, Co. Kerry. Due to the small population on the island, there are only about 20 people in the entire world with that name which is beyond unique!

I love the diversity, spelling, and pronunciation of Irish names, which serve as a link to a language that could potentially die out. The blog celebrates part of our cultural identity and I hope after reading the blog, that more people consider using Irish Gaelic names for their own children. In a recent post, Ruairí mentioned how a Chinese woman named her daughter Áine as she was born in Ireland and wanted an Irish name for her, which is exactly the kind of thing I hope the blog inspires.

* Bláthnaid is from a tiny village called Ardcath in Co. Meath. She's an art history graduate and apart from blogging her interests include lomography, pro-wrestling and all things vintage.