Kenny’s Bookstore in Galway go toe to toe with Amazon

Family-owned book and art business’ star on the ascent as books bounce back and innovated team takes the helm. 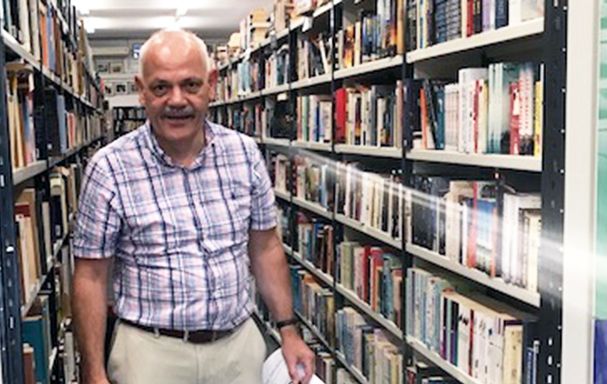 Galway city: On a jaunt up to Galway this week, I got an access-all-areas invite to one of Ireland’s most revered national treasures: Kenny’s Bookstore.

Back in the day, Kenny’s bookshop in the very heart of Galway, where the Kenny matriarch held court, was a must-visit item on any foray into the west.

But during the crash and with e-books becoming the fashion, the venerable family institution upped sticks and moved to a warehouse in the Liosbán Business Park on the outskirts of Galway.

Courtesy of Conor Kenny, one of a team of Kennys still at the helm, I was invited to pop into their bookshop and store to see for myself some of the one million books making up their voluminous stock.

For decades now, Kenny’s has also been known for its expertise in putting together valuable and rare collections of Irish material — often pamphlets, artists’ archives, or political collections — for universities at home and in the US. Additionally, Kenny’s, which boasts an art gallery, brought together the stunning collection of artworks relating to the Great Hunger which adorn the Museum of Ireland’s Great Hunger at Quinnipiac University in Connecticut, USA.

When your main competitor is Amazon, it helps to have a skill to fall back on, you might think, but in fact over recent times the Kenny star has been on the ascent again as books bounce back. When I visited, I saw books being boxed for dispatch to locations across the globe.

But a good bookshop is about more than just showcasing books. It’s also at the very heart of its community — as Kenny’s has been since its inception in 1940 — and remains to this day.

It’s worth checking out, online or in person on your next visit to Galway.

And I hear chatter about a Kenny’s BookClub. Sign me up!