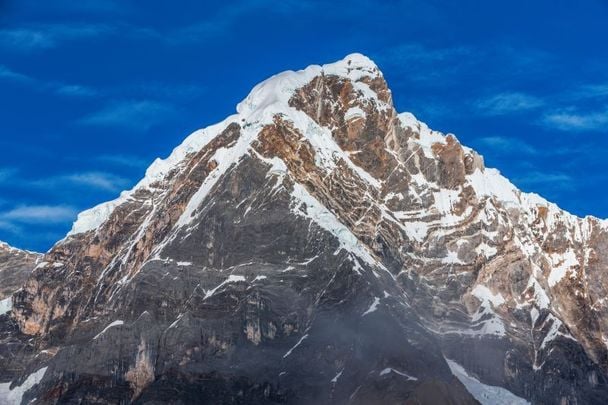 "It is not strongest of the species that survive, nor the most intelligent, but the one most responsive."  - Charles Darwin.

Joseph Simpson was born in Kuala Lumpur, on the 13th of April 1960 to a Scottish father and an Irish mother from Listowel, Co. Kerry. Joe was inspired to climb after reading "The White Spider" by mountaineer Heinrich Harrer as a kid.

In 1985, 25-year-old Simpson and 21-year-old Simon Yates attempted to scale the previously unclimbed West Face of Siula Grande in the Cordillera Huayhuash in the Peruvian Andes. Despite the climb being highly technical and challenging, they made the summit without too many setbacks.

As they were nearing the summit, the weather turned atrocious. On their hasty descent through blizzard conditions, Simpson lost his footing, falling a short distance breaking his tibia. Faced with no other option, Yates attempted to repeatedly lower Joseph down cliffs with 45 metres of rope.

Eventually, after a few descents, Yates proceeded to once again anchor himself while Joseph crawled to the overhang and roll himself into the abyss as Yates slowly lowered him down. Five feet became fifteen feet and before Yates knew it, there was no more rope with Simpson dangling on the other end and no means of communications or any idea how far Simpson was from the bottom.

Yates was left between a rock and hard place. Either cut the rope and save himself or wait to be dragged down the cliff plummeting to his death alongside Simpson. Faced with death or the chance of survival, Yates pulled out his knife and cut the rope with Simpson helplessly dangling in the darkness at the other end, completely oblivious of Yates's decision.

Yates cut the rope and Simpson fell over 100ft onto an ice ridge down a pitch-black crevasse. Yates continued to perilously descend from the mountain to the safety of base camp, convinced Simpson had fallen to his death.

Suspended on the edge of a ridge, Simpson was miraculously alive. He pulled the rope assuming Yates was still attached and had gone over the edge. He was shocked when he pulled the rope and it fell limply around him attached to nothing. Simpson's belief was Yates must be alive and most likely on his way to rescue him. When morning arrived, he realised he was on his own in hellish circumstances.

Initially, Simpson attempted to climb up out of the crevasse but soon realised it wasn't possible in his condition. He then made the decision to attach his abseiling device and blindly lower himself further down the crevasse without tying a knot at the other end. In other words, if there wasn't enough rope to reach the bottom, Simpson would fall to his death instead of dangling in midair slowly waiting to die.

Once he safely abseiled to the bottom of the crevasse, Simpson was faced with crawling through rugged terrain in blizzard conditions with a broken leg. He began setting targets in bursts of twenty minutes at a time. When he wasn't moving, he would think to himself "If I fall and die here, I'll be covered in snow and never found again."

After three and half days, Simpson's energy and sanity began to desert him. He made a final burst for a nearby riverbed and resolved himself to his faith in the hope his remains might be found in that location.

What Simpson hadn't anticipated was Yates was still at base camp recovering. As Yates was leaving the camp for good, his eyes nearly fell out of his head when he saw this zombie hauling himself down the mountain towards him. From base camp, Simpson had a two-day trip by mule to civilization before he was driven to a hospital where he underwent six surgical procedures on his right leg. He also lost over thirty percent of his body weight.

Joe Simpson wrote a bestselling book about the experience called "Touching the Void." Today, Simpson spends his time between Co Kerry and the UK.

Simpson and Yates haven't climbed together since.