Irish writer Diarmuid Pepper argues that specieism is the same as racism. 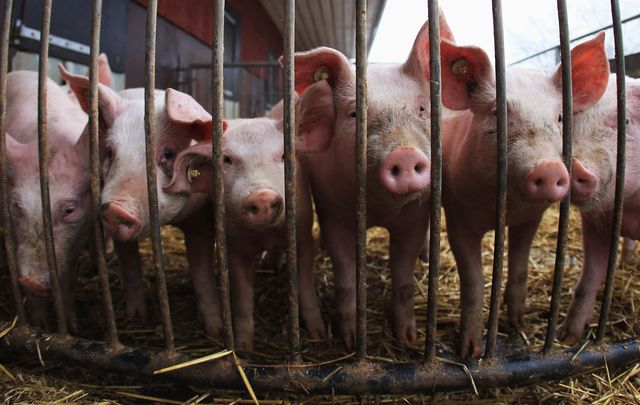 Is speciesism the same as racism? Getty

Twitter seems to have a new laughing stock, and it’s PETA. Many have lambasted the animal rights group for their new initiative tackling what they label “speciesism.”

Many have taken umbrage at their suggestion that such animal-based idioms are almost on a par with racism and homophobia. In a recent tweet, PETA said: "Just as it became unacceptable to use racist, homophobic, or ableist language, phrases that trivialize cruelty to animals will vanish as more people begin to appreciate animals for who they are and start 'bringing home the bagels' instead of the bacon.”

Just as it became unacceptable to use racist, homophobic, or ableist language, phrases that trivialize cruelty to animals will vanish as more people begin to appreciate animals for who they are and start ‘bringing home the bagels’ instead of the bacon.

You may not like it, but PETA is right. Speciesism is a real thing, and this normalization of language about killing and hurting animals will be looked down upon by future generations.

Racism is a misguided belief that your race is inherently better than another race. Racism still exists today of course but is not as normalized as it once was. In the 1800s, it was deemed acceptable to own black slaves, since black people were deemed to be inferior and sub-human. Today, we look back at such times and wince.

This behavior was once deemed to be normal but is obviously no longer accepted. What is widely accepted today, but is being challenged, is speciesism: the idea that we human beings are inherently better or more important than animals simply in virtue of belonging to a different species.

To think that we are more deserving of rights than animals simply because our species is akin to thinking that white people deserve more rights than black people.

When someone is asked why they eat meat, they sometimes offer up a few glib retorts before coming to a proper and reasoned answer. Most people justify the eating of and cruelty to animals by pointing out that they don’t have the same cognitive ability as we humans do.

We humans dream, and hope, and laugh, and love, and cry, and despair. We look towards a brighter future, whilst learning from our past. We have deep and meaningful relationships with those around us. We have a vested interest in continued existence because of all these things which are unique to our species and which animals lack.

So then we must ask ourselves, what is this, if not speciesism? It seems absurd to protect the life of a person in a persistent vegetative state but openly be in favor of the brutal cruelty which is carried out on masse upon animals with a far deeper and richer cognitive state.

We humans are continually wrong on three fronts; the beauty, the truth, and the good. It’s an idea that is put forward in Chuck Klosterman’s book But What If We’re Wrong?

Every society is wrong on the beauty - on art and music and literature. Take Vincent Van Gogh as a prime example; mocked and ridiculed in his lifetime, he famously sold only one painting in his lifetime. Today, he is regarded as one of the best artists to have ever lived. Centuries from now, perhaps the Beatles will be long forgotten and some niche band in the here and now will take the mantle of the best rock band ever.

We are also wrong when it comes to the truth. We used to believe the Earth was flat. We were not idiots, we didn’t just decide this on a whim. The best available scientific knowledge pointed to a flat Earth. Indeed, so sure were we of this belief, that we were willing to burn at the stake anyone who said otherwise. We humans also use to argue over whether animals can feel pain or not, and we now know that the answer is a resounding yes.

Lastly, we are continually wrong when it comes to the good. An obvious example is slavery: racism lead many people to believe that they were so superior, that they could treat others as mere material possessions to be bought and sold and put to work. But now we look back upon this era with revulsion.

Homosexuality is still illegal in many parts of the world. But within many people’s lifetimes, homosexual acts were illegal in the UK and in the USA. Today, we look back on yesterday with shame.

So it is incumbent upon us to ask, what are we wrong about today? And when it comes to the good, there are many differing answers, but our treatment of animals has to rank incredibly high amongst these possibilities. It seems incredibly likely that people in 500 years’ time will hold us in the same contempt with which we hold slave owners.

Future generations will be quick to point out that we don’t need animal meat for protein, that our dependency upon meat is a millstone around the neck of the environment, that it’s absurd to use more antibiotics on healthy animals to fatten them up for slaughter than on sick humans in need of sustenance.

Future generations will perhaps also look upon us with bemusement for the way in which we normalized this systematic torture of animals in our everyday speech. In the same way we squirm at the use of the n-word in the children’s nursery rhyme “Eenie Meenie, Minie, Mo”, future generations will balk at some of the things we normalized within our everyday parlance; like dog fighting (“have a dog in this fight”), bullfighting (“grab a bull by the horns”), and torturing animals for often trivial pursuits like cosmetics and shampoos (“be the guinea pig”).

PETA’s latest campaign may be somewhat ham-fisted (can I still use that phrase?!) but it serves as an opportunity to reflect upon our reprehensible treatment towards animals and how this mistreatment is wrongly normalized in our everyday speech.

What do you think - is using animals for food a form of speciesism? Let us know in the comments!