Sheila McNally is settling back into life after a serious bout of COVID-19 while living in her adopted home of Paris, France. 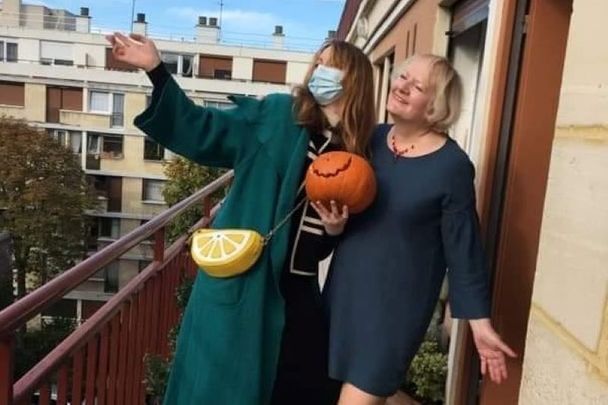 Sheila McNally was admitted to a clinic in the 8th district of Paris for a sleeve gastrectomy. Prior to the surgery, she had undergone rigorous medical tests, including cardiac, to ensure she was in perfect health for the surgery performed on “Friday 13th of March."

However, very soon after her operation, it was obvious something was amiss. She was transferred to a hospital in the North of Paris for a follow-up emergency gastric surgery. In the wake of this second intervention, something was dramatically wrong; the doctors had “lost control of her heart and lungs.” Sheila had caught Covid-19 and would spend two months isolated in intensive care drifting between life and death.

Her surgeon visited her every day and sometimes twice a day and is convinced that it was her “fighting Irish spirit” that saved her. Another factor, which helped, was the fact that she was in excellent health before the surgeries and falling victim to Covid, which contributed to having the physical strength to pull through.

Sheila learnt how to walk again with the help of physiotherapist Guillaume Lebreton. Although on a consistent road to recovery, she also suffers Covid “relapses” or setbacks. In October, she wrote to me after we had tentative plans to meet “I would love to however this past week I have suffered a massive Covid-19 relapse and need someone to hold my hand just going from the bedroom to the bathroom in our small apartment. However, I’m staying positive and have big ambitions of going to the Opera Garnier when I’m better and life is back on track.”

Sheila is part of an online Irish post-Covid support group. Nine months down the road, the group members have similar struggles. She realizes that she’s one of the luckier ones, though she probably was the worst hit of the group by the killer virus.

She recently consulted an eminent Parisian virologist at the renowned American Hospital in Paris. After reviewing her medical record documenting her many near escapes from Covid’s tenacious grip, he scratched his head, took off his glasses, and asked “Madame McNally are you really alive ?” Medically she should have died at least four times; he reckoned her inner force was unprecedented. Sheila smiled and said, «cher Docteur, I had other projects».

He, like all the other specialists she consulted, seemed to be searching for a « miracle case » rubber stamp to classify her file. The good news was that he confirmed that there was no major damage to her heart or lungs. However, she left the consultation feeling that he, like other eminent medical specialists she consulted on the road to recovery, was a bit lost in unexplored Covid territory…

In November, Sheila had another setback after a short shopping expedition with her son Corentin. She felt a massive weakness, a frequent sensation after any effort since Covid. With the help of her son, she somehow managed to make it home to bed. The next day, when there was no sign of recovery and she couldn't walk by herself they called the SAMU (the French medical emergency assistance hotline). Four gorgeous firefighters came and immediately monitored her heart. In France, firefighters are not only on fire duty but are also sent to your rescue when you’re locked out, when a pregnant woman faints, when your cat is stuck up a tree or when you think you’re having a heart attack. And now, in a new line of duty, when Covid-19 patients suffer a relapse.

After they declared her heart sound, in their calming presence, Sheila realised she didn't want to go to hospital unless absolutely necessary. The chief firefighter rang the head of hospital emergencies who said as her heart had passed the test it wasn’t necessary. She wrote, “this too will pass, wiped out but glad to have done something nice with my son on a beautiful sunny day."

As usual, a couple of days later, Sheila’s sense of humour resurrected before her physical strength. Still staggering and lightheaded she wrote, “at least I can call the firemen again to cheer me up if needed! Vive la France!”

That same week, Sheila managed to keep her cardiologist appointment. She brought along the results of the cardiac tests she had done prior to her sleeve surgery in March. After examination, the cardiologist also confirmed that her heart was as good as pre-Covid. He has treated other "severe" Coved cases and explained that Coved victims often suffer the symptoms of heart failure. Some like Sheila are clinically fine despite having cardiac “elephant sitting on their chest” symptoms. Others suffer post Coved heart complications for life. Evidence has also shown that cardiac damage can happen among people who tested positive but never displayed any Coved symptoms.

Like the virologist, he scratched his head and tutted that this virus was very "bizarre" and it seemed although they were working overtime to understand it, for the moment not that much headway was being made. They just “couldn’t always understand what was going on inside the survivors’ bodies”. His advice was to rest and rest more, and to take only very short walks. And maybe throw in a flat 7-up and a cuppa Sheila mused to herself!

She appreciated that like the virologist he was upfront in admitting they were “still learning”. Sheila, and severe Covid survivors, contend with the fact that doctors don't yet have the knowledge, experience, and perspective needed. She chatted with a Paris-based Irish psychologist, surprisingly another West Cork native, who advised her to try to be patient with the brain fog. Did those two women ever imagine that one day they’d become acquainted in Paris over post-shock trauma invoked by a 2020’s movie-like killer virus?

Sheila knows recovery is a slow process. Although literally and metaphorically she has a strong heart, she is, unfortunately, experiencing kidney and thyroid issues and will undergo further medical examinations in the new year.

Luckily, she is surrounded by Pascal, her loving husband, and their three children. Recently they visited their country house in Giverny, where the French Impressionists loved to paint. She delights even more in nature after spending so much time cooped up. During her lengthy sick leave, she’s received the constant support of her colleagues which keeps her feistiness up.

Despite the Covid relapses, immense fatigue, the brain fog, and other issues she knows she’s very lucky; most people as gravely ill as she was are no longer here.

Sheila is just not a stay at home person. Included in the “other projects” she mentioned to the virologist was the “carrot” of going for a night out in Paris with her Irish friends. However, theatres, pubs, and restaurants in Paris remain shut and will only reopen on 20 January if Covid numbers are sufficiently reduced. Until then, it will be as Kitty O'Meara, the Irish Covid laureate said «And the people stayed home. And read books, and listened, and rested». Even President Emmanuel Macron, who recently tested positive for Covid, will be following O'Meara’s words and isolating for the next week.

Although during this holiday season many of us in Paris are dreaming of a high bar stool “just like the ones we used to know”, we are well aware that staying alive, being blessed by family and our tight-knit Irish community is in itself a miracle.

Joyeux Noel and Nollaig Shona libh go leir and may the road rise up to meet us all in 2021!