Irish summers and memories of my childhood 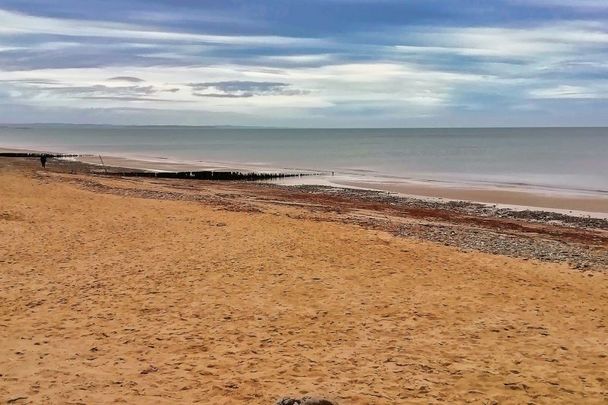 You know Summer has come.

After the winter, spring is always such a relief. The colours, smells, and sounds. You know when you have the chance to walk in the forest and touch the new leaves, they are so soft, as soft as their young colour, new green. Again, the green is a colour we can connect too. Green is Ireland, we love it. All the shades of it. Then the swallows turn up after the winter away, a bit like us Irish living away we turn up again, return to the favourite places.

Before one blinks, it’s here and with it brings that anticipation of heading back. You can’t get away from it. The feisty Mnà France were all a chat about who is going back, when, and how. What is the deal with the ferry? We have a choice of three Roscoff - Cork, Cherbourg - Rosslare, Cherbourg - Dublin. Brittany ferries, Irish ferries, and Stena.  Then there is the chat about can the dog come. 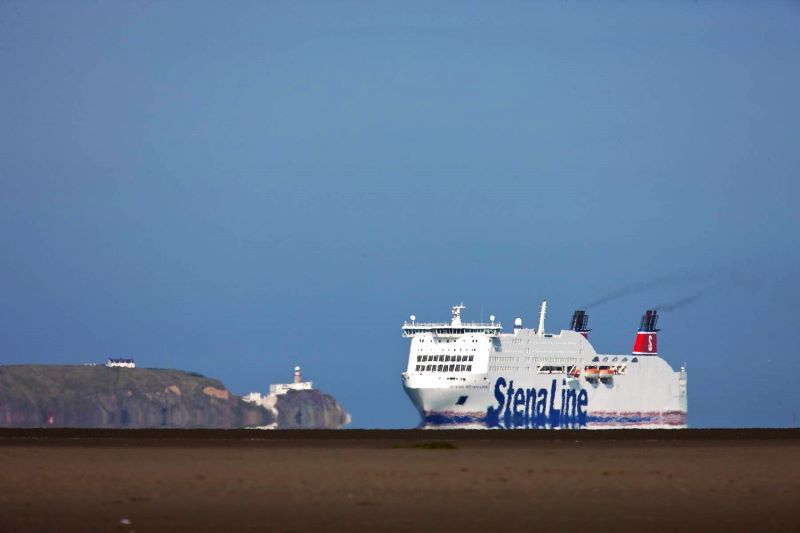 I’m waiting for the chat on the orders to start, for who can bring back stuff, you know the sausages and rashers and Tea who can do without a decent cuppa. We can late debater on the merits of Barry’s or Lyons. Well, I’m a Cork girl so there is no discussion, it's Barry’s.

Then the banter changes to the airlines. Aer Lingus, Air France, Vueling there are others, oh how could I forget Ryanair, Transavia amongst the cheapies. Surely there is enough competition to get the buzz going on who has the best price. The best prices would kill a saint usually at 6 am- heavens forbid who in their right mind would get out of your bed to leave all at 4 in the morning. 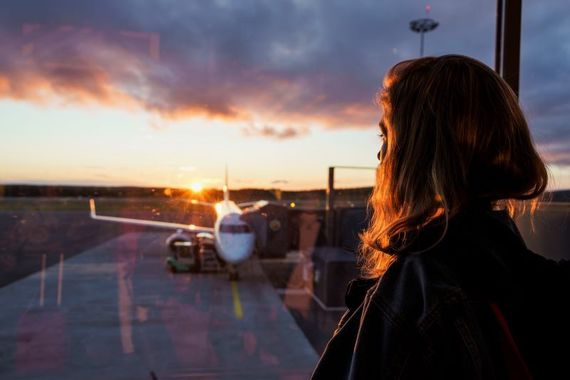 Don’t get me started about the car rentals, doubled since pre-epidemic, enough to seriously look at the buses, even walk. Ok, ok, only joking. Dublin Airport to Cork is a bit far.

I wonder would there be any time when a tunnel would be built, Ireland - France would be great, come and go as we please. I dream….my dog would love it, she’s Queen of the back seat, sitting up watching the world, barking at whatever she feels is too close. Puts the heart across you, nearly eject myself out through the roof, what a fright you’d get.

One has to join in the fetish scramble to book some sort of transport to have some bit of summer back home. We compared notes. WhatsApp was on fire!

The dreams of what is to come.

Passing away the time in a coffee shop chatting again and again. Walking down the street and getting “Ahh you're home, great to see you. You should have said and we could have had a coffee! How are the lads”.

To walk the length of the street would take me five minutes, but with my mother would take an hour. She knows the world.

Her mother, my gran, was the same in Wexford. Going shopping was something else, she inspected everything, quality control had a different meaning, you could only laugh. It was that know the world that you miss when away. She was from near Enniscorthy. This world is so connected. 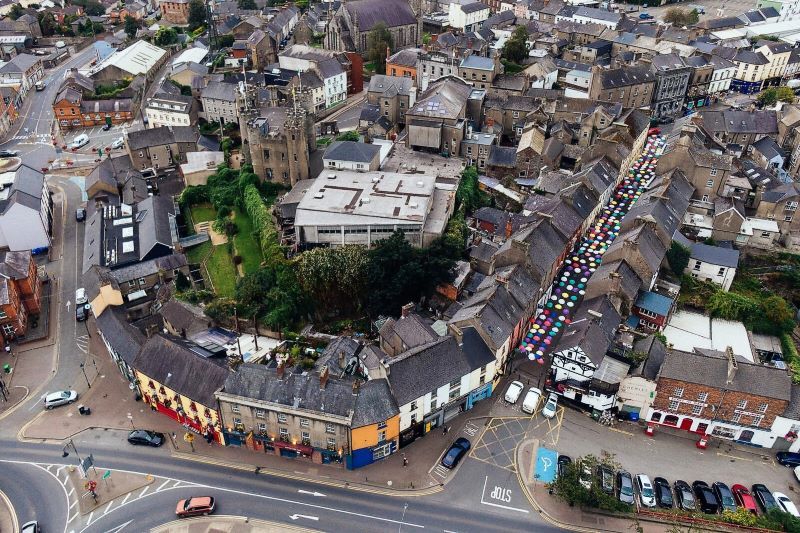 I found a connection between Paris and Enniscorthy the other day. You never know when you are flung back to your roots from here to there. Another Enniscorthy woman, Eileen Gray, the famous Irish furniture designer, Monte Carlo Sofa, €1027 table. She had lived her life in Paris. In fairness, one of her pieces, I’m told, sold not so long ago for 2 million. Made me wish I was her niece. My only claim to fame from her side would be sharing a part of Ireland. Not sure that would cut it.

With the dreams come memories

Back to summer, the Mnà so often reminisce back to when they grew up or holidayed in various parts of the country. For me, it was either Garryvoe near Midleton or Rosslare strand, near Wexford, the long sandy beach, cold sand, freezing sea, wind, and the famous ice-cream van.

The music from the van must be part of all our summer memories. I tried to look on YouTube for the real music. It’s hard to describe it, tinny I suppose but not a real tune. It’s a sound that triggers that childhood bliss. No matter what the chime is it’s known the whole world over. The sight of it coming along the beach would have us all in such a state of total excitement. Despite the sand sucking at your feet, trying to run up to my mother, out of breath, desperate to make sure we had the coins for the famous 99er. Returning to the van, jumping up and down, restlessly waiting in line behind the others who had got back faster. I have this image of shorts, and tee shirt under a jumper. As the line got shorter the anticipation rose. At last, it was our turn to raise the hand and pass over the pennies, then take the ice cream. The symbol of summer. The mass of white creamy ice cream in a twirl perched on a biscuit wafer-type cone with a chocolate flake sticking out the side. The first long lick was bliss. 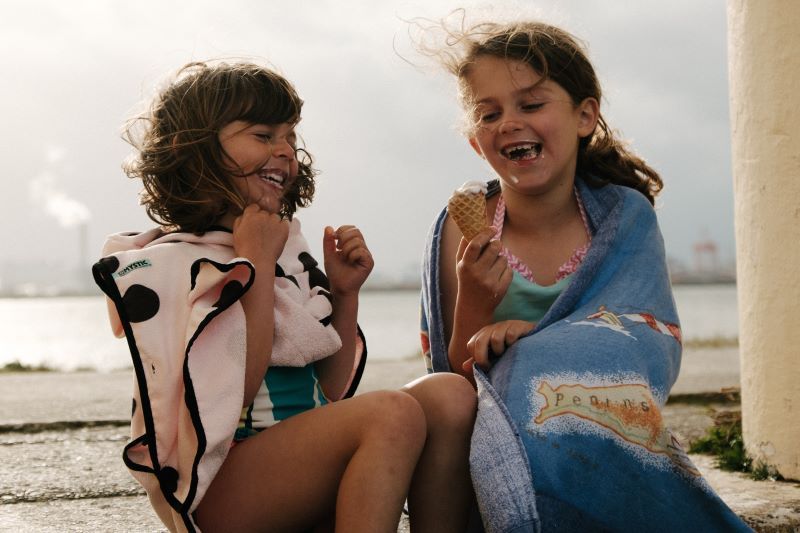 Now finding a rock to hide behind, so important, there was two reasons for this. The important one was away from the brothers so you could lick in peace, and the second was to shield yourself from the wind which just wrapped your hair around the precious 99er. You’d be spending half these wonderful moments trying to do the lick but minus your hair. You’d be frantically fighting flying hair and wind. Going in circles with the aim to have the wind coming in the right direction. The quiet place is so necessary. So is the question to lick the whole way to the end or do you bite the end and suck out the content from the bottom, this could include biting the flake encased in the cone with the little remnants of ice cream.

As children, summer was filled with long periods with grandparents, aunts, uncles, and wonderful cousins. It was packed full of the trills of being together. Some were on my grandparents’ farm. Collecting the eggs, there was a huge shed out the back of their garden which seemed to have hundreds of hens but probably had 10. This was always when you could separate the city cousins from the country ones, screams of fear mingled with screams of laughter as a hen flew from its perch. 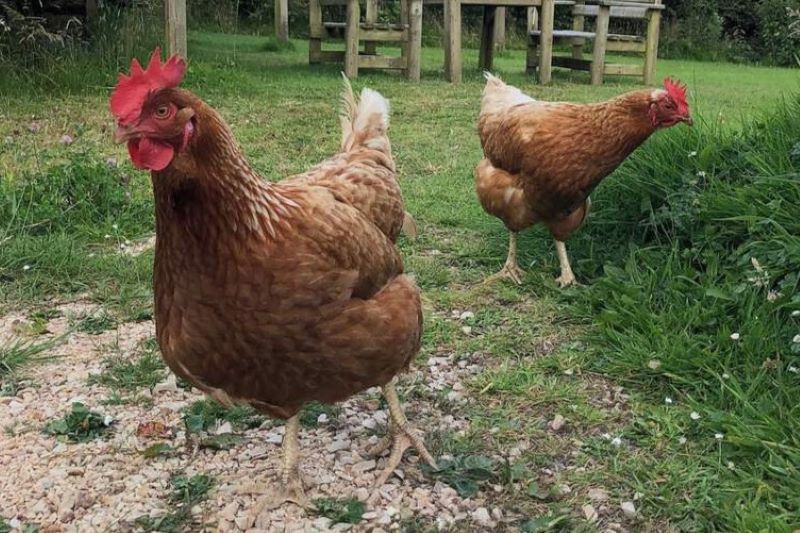 There were the days when we were all sent out picking strawberries. Loved this job. It ended in Granny’s kitchen. As I write, my brain is in a flood of tastes and smells from back then. Oh! The taste of freshly picked strawberries squashed in granny’s freshly baked white bread, still hot. The juice which oozed out, dripping down your chin. Bliss.

The other times were on Rosslare strand, as this was near the home farm, images of running, playing, and happily hanging out together. Which brings me back to summer, family, and on the strand with its wind, cold sand, and licking treats.

With ice cream finished we would regroup. Rosslare was the place of cousins. The summer-long playing together. In and out of the sea in one long line running in to jump the waves. You couldn’t avoid getting a face full of icy cold sea, screams, and laughter explode. Then the splashing of those who hadn’t fallen. In and out for ages splashing, a type of swimming, breathlessness from the cold grabbing your chest, making it hard to take the next piece of air. At last, exhausted, it was time to return to the caravans. The sand clinging to our feet up to our knees. Wrapped up in a big towel. Held tight under our chins to keep warm. Underneath you had this sense that you glowed. A warmth that only comes from being in the Irish sea.

We had a choice which caravan to go to. No matter which one, the chant was the same, “don’t come in unless you have all the sand off your feet”. We would have to inspect each other to make sure all the sand was off as no one was allowed in until the last had sand-free legs and feet. Even between your toes. At last, we crowed around a table to enjoy the rewards. Miwadi orange, club biscuits, Tayto crips. Giggles and pure happiness before heading out again but first to find which Aunt or Uncle would take us all off to the beach again. Sometimes, as luck would have it, it was one of our grandparents.

You wouldn’t believe it, but an adult moment happened only a few weeks ago. Out on a beach in Brittany, France. The sun was out, the wind blew. Walking along, there was a deep want for an ice cream, let's be correct, a 99er. My youngest at that moment comes up beside me and declares “Don’t you think it’s a moment for a 99er Mum”. Oh! My heart lifted. A kindred soul.

So, the hunt commenced. In a seaside town, of course, the correct shop was found, you could see the machine, cream coloured, the pulling handles in the familiar posed position really for action.

With pride, a beautiful twirled ice cream perched on a biscuit cone was handed to me. It was only missing a chocolate flake. Never mind, we were off to find a spot out of the wind, to lick the wonders, keep the hair off and enjoy. The debate started, lick from the top to the end or, lick to the top of the cone and then bite the bottom and continue to suck the wonderful, soft, melt-in-your-mouth delight from the bottom. 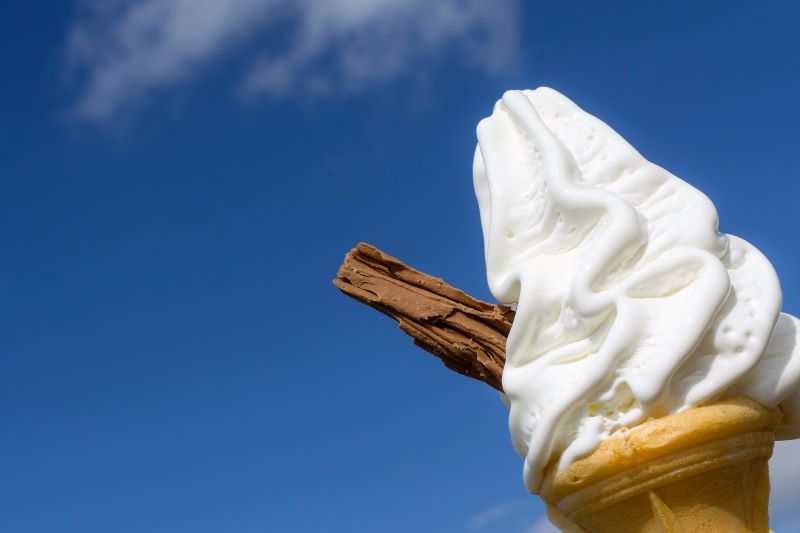 A silence arrived as we all enjoyed the feeling of the cold sand on our feet, the wind blew, I was the only one turning in circles to get the hair off the cone. This was a moment of childhood memories and pure enjoyment. The sun shone not hot but enough to counteract the cold of the ice cream as it travels down.

The soul is filled with pride as a new tradition has been passed on to the next generation. The Irish tradition of ice cream licking on a windy beach with cold sand and freezing water.

All those years ago, I never imagined that when staring out to sea from the strand at the ferry coming from England or France that I would be returning year after year looking back from the ferry to the strand, remembering those times but still meeting those wonderful cousins and family members to exchange the tails and happy memories of cold sand, wind, ice cream vans, and 99ers.

The enduring love of The Quiet Man

GAA Roundup: Kerry and Galway to face off in GAA All-Ireland final