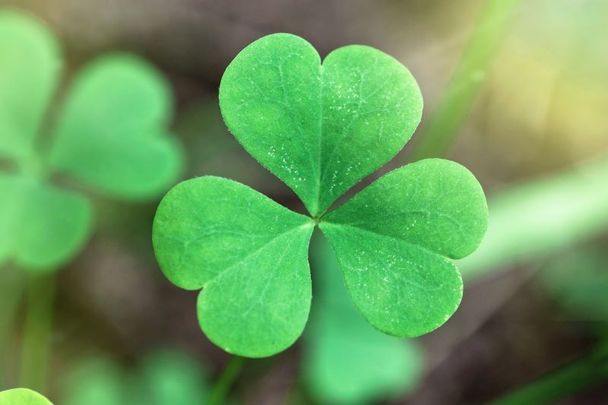 How one Irish woman in Paris paid forward an act of kindness involving a sprig of fresh shamrock. Getty Images

This year is the year, we are back on the streets of Paris, France for our St. Patricks Day Parade.

More precisely, it will take place on Sunday the 13th of March. In France, there is no bank holiday on the 17th, but we Paddies will wear the green. We will be covered in shamrocks, be they in print or in real.

(That is to say that the little pot by my window might allow for one sprig on the day. There isn’t a great track record for shamrock growing here. In 2020, I won a prize for the worst shamrock in the whole of the Irish French community. I was slightly proud, if I'm being truthful.)

My inbox recently had an email offering a free online course as an act of kindness. Lo and behold, the date to sign in with a code was the 17th of March. How funny is that?

That email brought my mind straight back to Paddy’s weekend in Paris in 2019. It is always an important weekend to connect to my Irish French Village. The festivities include a fantastic parade, full of the Irish who live in Paris and its suburbs. We have got the banners made to show everyone all the different organisations, The Irish Mamie’s, Irish in France, and many more. We are also honoured to have our ambassador speak among the dignitaries.

Anyway, the Friday before St. Patrick's Day 2019, I was feeling some bit flustered (not uncommon in my work as a community midwife) trying to get parking near Avenue Foch, Avenue de la Grande Armée both near Etoile off the Champs Elysées.

As I walked down the Avenue de la Grande Armée, I thought I began to hear things. I had to stop and listen. I was sure of it, it was an Irish accent, but the language that should have been heard was French. I listened closer and turns out it was English with the gorgeous sing-song tones of back home.

I turned around and was amazed to see that these three people with Irish accents had a beautiful spray of fresh shamrock. It had to be a dream, how in heaven's name could there be fresh shamrock on the streets of Paris?

With nerve and being a bit forward, I asked the group where they got the shamrock and if they could direct me to where they could be bought. For sure, they were somewhat taken aback. Turns out that they had come from a reception at the Embassy. I was there in front of one of the ministers of the Irish Government, another was his personal assistant, and the third was a member of the embassy staff.

Sure, none of them knew this woman before them from a bar of soap. The personal assistant straight away offered me her sprig. That knocked me for six, it wasn’t what I expected. I swallowed hard and said 'Yes, please!' Could I pay her, I asked. They all laughed as in fact they had been given them at the reception.

The minister wanted to know how did I, an Irish woman, come to be on the streets of Paris. I reassured him that even though he might have the impression I was a bag woman, I was in fact one of the millions of Irish health professionals spread all over the globe. I explained that at that moment, I was heading to see a new mother and her baby fresh out of the hospital.

The story continues the following Sunday at the big gathering in the Irish Cultural Center/ Centre Cultural Irlandais, in the 5th arrondissement, Paris. (Just in case you plan to visit this beautiful historic Irish center it’s on Rue des Irlandais. Handy that. Remember the date for 2022 is the 13th March, don’t get it mixed up. The good news is that you could even make another parade if you wanted.)

At this faithful gathering, I was chatting to another Mnà and telling her about my encounter on avenue Grande Armée. Next thing, a woman spoke up and said,  “that was me you met”.

It was wonderful to be able to say a real thank you and tell her how touched I was by her jest.

With this warm feeling of kindness, the day continued full of connection and Irishness. It was strange walking around the streets near the Pantheon in Paris, the French locals waving from their balconies. The Gendarmerie was full of smiles and totally relaxed. Bands were playing the usual Paddy’s Day parade tunes as the local Irish followed along chatting and connecting.

A common question was “Where are you from?”

"Oh! My family is from there. Would you happen to know the so-and-so family?”

Sure enough, someone would know them and others will find a connection somewhere. We always do, be it family, friends who know so and so, or someone who went to that school or college. You will surely know the score!

The whole parade was spent like this in a frenzy to know someone from back home. We were all born and educated there and still call it home. We all dress in the uniform of green, the different shades of green, as excepted. The forty shades of green. It was and is such a happy day together.

We returned to the Centre where there was some beer to be drunk, Irish stew to be eaten, and street artists to entertain us. The stew was a welcome to warm us up. The children had their faces painted and music floated all around us. The atmosphere was fantastic.

We wandered around looking for various friends we may have missed. I am lucky to have met up with young Irish families and was amazed at how big their babies have gotten. I hear the same things said as you hear back home - “Oh hasn’t he got so big!” “I love the outfit, a real little Irishman”.

The dropping light had its way of winding down the festivities. As it's always on a Sunday, we rambled home feeling great and grand.

Monday, back to work, I took the train this time. Before leaving the metro, I thought it was important to pass forward the kindness I received over the weekend. The metro is often a place where homeless people take shelter before the day wakes up and they move above ground. They have so many stories but it is always an important human thing to say hello and acknowledge these fellow human beings.

So that day, I decided I didn’t need a croissant and coffee, but they did. There were about four men watching the world go walking by. They were not far from a boulangerie which had a tray of mini patisseries in the front. Perfect.

I got chatting to one of the men and asked would he be ok if I offered them a little breakfast. He was happy and politely accepted. His story was interesting. Having suffered from depression, he lost so much of his normal life. Not coping at home, he found himself homeless.

And then, what was but a perfect omen, there in front of me waiting to order were five young Irish women.

"Oh! Were you here in Paris for the Paddy’s Day parade?"

No, they were here on a shopping trip. "Oh!" I was a bit surprised, but it made a fantastic end to that overpowering Irish weekend.