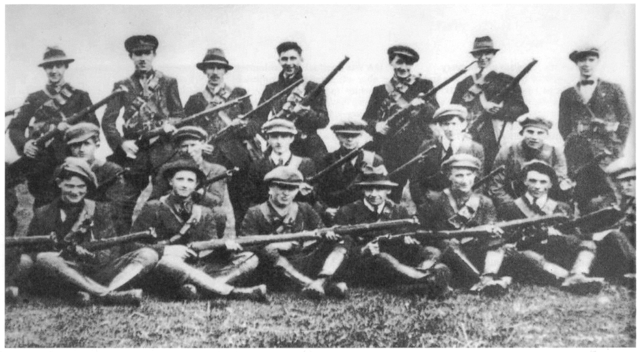 This is an unusual story of Malachy Hughes, and what we can gleam from Prof. Knipe's The Fourth Northerners.

Prof. Greg Knipe has a new book out, The Fourth Northerners, about the Irish Republican Army's 4th Northern Division during the War for Independence. Among other things, it includes a range of documentary records, a detailed chronology of events and participants, and the surviving membership rolls for individual units including Cumann na mBan (the republican women's organization) and Fianna (the republican youth organization). These membership rolls were collected in the 1930s to identify individuals who might qualify for a military pension. The typical records include a list of units attached to each IRA Division or Brigade, with the names of members, their rank (if any), and their current address at the time the roll was created in the 1930s.

Buried among all those records is the membership roll for the Aughatarragh Company, in south Armagh. It was part of the 2nd Battalion of the 4th Northern Division's 3rd Brigade. The name of the Company's commanding officer is given as Captain Malachy Hughes, and his address (at the time the rolls were compiled in the 1930s) is given simply as |R.U.C."

Not much seems to be known about Malachy Hughes' story. He joined the Royal Ulster Constabulary in 1924 and became part of the Governor's Guard at Hillsborough Castle, in County Down. Prior to 1924, it isn't clear when Hughes left the IRA and he doesn't seem to have joined the new Free State's National Army south of the border or been imprisoned. In March 1934, he was transferred to County Tyrone, to Sion Mills and took charge of the customs post at Clogher.

Hughes name crops up frequently in the newspapers as he appeared regularly in court. One report describes how he was assaulted by a man smuggling cattle after a mile-long chase on bicycles. He wasn't badly hurt as both then had to go and pursue the smuggled cattle which had scattered across nearby fields. Another court appearance concerned the arrest of Owen McDonough in Donegal by Gardai in 1940. McDonough claimed he was brought to the border by the Gardai who had arranged for Hughes to be waiting for him. Hughes then arrested him as soon as he was 'bundled over the border' with no attempt at any formal extradition proceedings. McDonough ended up imprisoned in Derry.

Hughes also came up against the IRA. In April 1942, when a young IRA member, Frank Morris, tried to evade arrest at Carrickalee, near Strabane, Morris pulled out a gun and wounded an RUC man before escaping. Hughes appears to have led the search for Morris and found and arrested him in the River Finn. Hughes was appointed as an explosives Inspector for the R.U.C. in the 1940s and 1950s (his appointment was finally revoked by Terence O'Neill the future Unionist Prime Minister). Hughes was transferred to Ballymena around 1945 and retired from the R.U.C. there as a Sergeant around 1956-57.

Perhaps someone can add some more information to Hughes' very intriguing life journey.

You can check out Gregory Knipe's book The Fourth Northerners here.