Irish Great Hunger tells its lessons but will we listen?

"As it was for the Irish, each time a child is born our reliance on our most productive crops increases." 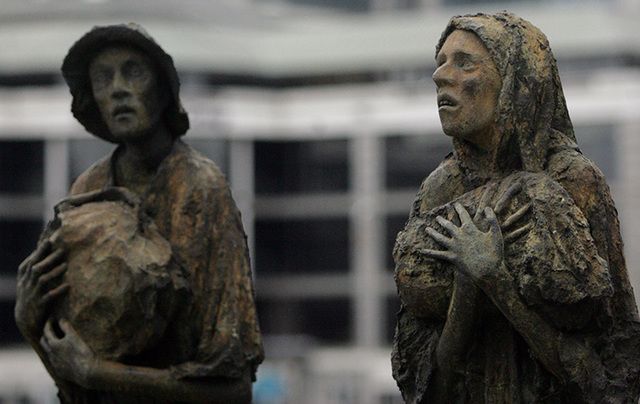 A recent issue of New York magazine decided that summer is no time to focus solely on happy, peppy news stories.

In “The Uninhabitable Earth,” author David Wallace-Wells produced an impressive, frightening spread about “famine, economic collapse, a sun that cooks us: What climate change could wreak -- sooner than you think.”

In one sub-section, entitled “The End of Food,” he added, “Remember, we do not live in a world without hunger as it is…Most estimates put the number of undernourished at 800 million globally. In case you haven’t heard, this spring has already brought an unprecedented quadruple famine to Africa and the Middle East; the UN has warned that separate starvation events in Somalia, South Sudan, Nigeria, and Yemen could kill 20 million this year alone.”

Some people weep at such misery.  But not everyone.  While Wallace-Wells does his best to pull at our heartstrings, not to mention scare the pants off of us, others view him as a bleeding-heart fear-monger.

And so, in the spirit of good, old American self-interest, let’s ask: What’s in it for us?

Just to focus on hunger -- which should have special resonance for anyone with Irish roots -- a world in which nearly a billion people can’t feed themselves is going to be radically unstable.

We can build all the walls we want. Even if they keep the so-called undesirables out, the consequences of a starving world of rising temperatures and sea levels will be dire for the U.S.

Again, this is not to say America should drop everything and embark upon a mission to deliver free food and water to every dusty outpost on the planet.  It does mean that perhaps we should participate in the most moderate of global efforts which might -- might -- ameliorate the worst consequences of famine, or halt global warming.

Just last week, former South Carolina governor David Beasley -- a Republican, no less -- testified before Congress that the U.S. should do more for looming famine threats.

Yes, yes, I hear the angry voices, those who are sick and tired of helping the wretches of the world who still end up hating us anyway.

It is also in our interest, whether the issue is hunger or climate, to think about not just narrow issues (like coal jobs and low food costs) but broader issues.  Again, Ireland’s famine serves as a warning.

In his recent book Never Out of Season, biologist and professor Rob Dunn takes a fresh look at the Irish Famine.   He notes that commercial interests often pressured scientists to avoid the evidence right in front of their noses.  Sound familiar?

“Societal pressure” even led experts to blame any blighted Irish potato crop on “weather or bad seeds,” rather than the fungus that actually caused it.  People could have gotten “down to the business of treating [potato] plants and preventing them from being infected in the first place.”

Dunn also adds, “Perhaps the hardest thing to conceive of is that the demon that stalked the Irish fields could afflict us today.”  But he notes, “Like that of the 19th century Irish, our diets have become ever simpler and more dependent on a smaller number of species…We need ever more food from each acre and so are bound to those crops that produce the most.  Just as it was for the Irish, each time a child is born our reliance on our most productive crops increases.  Corn in North America.  Wheat in Europe.  Cassava in Africa.  Rice in Asia.”

On a wide range of frightening topics, the Great Hunger still speaks to us.  Will we choose to listen?