Simply called "Céilí", the new show is a fusion of graceful dancers and top-notch music. 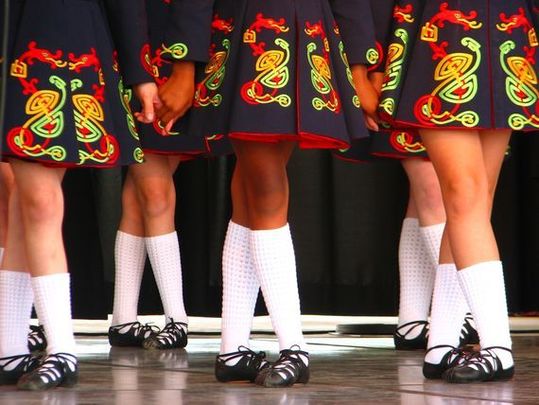 The very first notion I had of ceili dancing was as a fledgling student at the Irish Arts Center almost 50 years ago. Already an ardent follower of traditional music but not inclined to take up an instrument, it was an enjoyable way to participate and improve via ceili throughout New York and beyond.

Over the course of my life, I have attended many such events where skillful and graceful dancers have matched the fusion of top-notch music where the two seem as one. Such was the brilliant show at the new Irish Arts Center (IAC) in the old neighborhood of Hell’s Kitchen when I attended a new production simply called Céilí, choreographed by Darrah Carr and Sean Curran.

It was the third dance show produced at the almost one-year-old IAC now perched in its impressive new premises on 11th Avenue. It has a marvelous second-floor performance space that can finally display dance shows with a large stage and tiered seating to take it all in.

This new show borrowed on a collaborative theme of an innovative series the IAC created some years ago called Masters of Collaboration.  In this case, it was the dance companies of veteran contemporary dancer and teacher Curran - and Carr -  who had their own 14-year track record of presenting dance shows around the corner at the IAC’s Donaghy Theater, where intimacy ruled but not necessarily sightlines for dance shows.

Along with distinguished careers starting in the competitive Irish step-dancing world, both Curran and Carr moved into the realm of modern dance and choreography buttressed by their work also academically first as students and teachers.

Their own paths first crossed at NYU Tisch School of the Arts and they have worked together over the years. The IAC’s Aidan Connolly and Rachael Gilkey asked them to design a new show for the opening year.  Post-pandemic uncertainties like mass gatherings presented some challenges, but the final production showed no evidence of that as the two companies worked very hard on their routines and eventually the marvelous and fluid interaction on stage.

One can’t say enough about the extraordinary musicians Dana Lyn and Kyle Sanna on fiddle and guitar respectively, opening the show on their own and continuously throughout the enjoyable and quickly-paced performance.

Lyn and Sanna, who have a well-deserved reputation for composition and performance in their own right, also display and strong affinity for working with Carr’s dance company.  Like a brilliant ceili band, they put flight into the footwork of both companies’ dancers displaying equal measures of grace, technique, and athleticism on behalf of the dancers.

Kudos goes to the Irish Arts Center, Curran, and Carr for a stunning and delightful celebration of collaborative dance and music.  I look forward to future efforts like this show.