It is unacceptable that as the fifth richest country in the world, Ireland still has over 16% of its population (780,000 people) living below the poverty line, according to the Society of St Vincent de Paul charity. 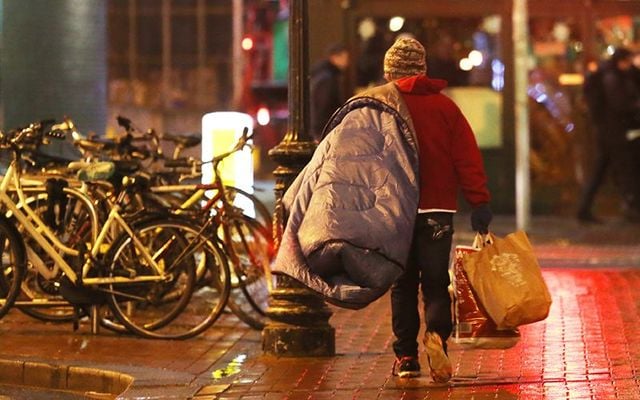 A homeless man walking in the rain, on the streets of Dublin. RollingNews

It is unacceptable that as the fifth richest country in the world, Ireland still has over 16% of its population (780,000 people) living below the poverty line, according to the Society of St Vincent de Paul charity.

Editor’s note: The following statement was submitted by the Society of St Vincent de Paul (SVP), Ireland’s largest voluntary charitable organization in Ireland, which was founded in 1844. The charity aims to deal with poverty by “alleviating its effects on individuals and families through working primarily in person-to-person contact by a unique system of family visitation and seeking to achieve social justice and equality of opportunity for all citizens.”

This is their statement in full:

At the launch of ‘Paving a Pathway out of Poverty’, the SVP Pre-Budget Submission launched today (12th June 2018) SVP National President Kieran Stafford said that what is particularly stark about the level of poverty is that 70,000 more children are growing up in poverty compared to 10 years ago. He also said that SVP now receives double the number of calls for assistance than it did in 2008.

The SVP’s ‘Paving a Pathway out of Poverty’ contains 35 practical proposals which SVP describes as incremental steps, that if implemented, would have a positive impact and help pave a way out of poverty for hundreds of thousands of people.

Currently, most social welfare rates are below the poverty line and well below what many households need to afford a socially accepted standard of living. https://t.co/rw5pZFnl3d #SVPbudget19 #Budget2019 pic.twitter.com/VubQl1UZsn

The Society says that Budget 2019 needs to reflect a real commitment to tackling poverty in all its forms and requires:

- An integrated, whole of government approach to budgetary decisions.

- Prioritizing investment in services and supports over tax cuts.

Kieran Stafford said, “Poverty is not inevitable, and its eradication is possible, but it requires well-designed policies, resources and political will. Poverty not only hurts the individual affected; it hurts communities, it hurts the economy, and it hurts society.”

He also said that the negative social and economic costs arising from the recession are still apparent to members of SVP throughout Ireland.

On Monday, @kieranstafford1 brought up the #worlddayofsocialjustice campaign that @SVP_Ireland released recently. This campaign informs others of injustices faced in the country, and destigmatizes stereotypes associated with those below the poverty line. pic.twitter.com/4puJ9xrFOl

Mr Stafford says that SVP strongly believes that the measurement of our country’s success should not just be based on economic growth. “A functioning economy means having an adequate social protection floor that meets everyone’s basic needs and where no one suffers enforced deprivation. It means having access to decent jobs. It means having equal access to quality housing, education, childcare and healthcare.” he said.

Dr Tricia Keilthy, SVP Head of Social Justice said that over the medium term, SVP is calling on Government to publish, resource and implement the new National Action Plan for Social Inclusion. “This means the fight against poverty needs to be prioritized on an ongoing basis, at all levels of Government, so that Ireland meets its commitments under the Sustainable Development Goals to eliminate poverty by 2030,” she said.

- Assist those in mortgage arrears with debt restructuring arrangement to help people stay in their homes.

- Improve standards in private rented sector by enhancing the capacity of Local Authorities and Residential Tenancy Board to carry out inspections and pursue breeches in minimum standards.

- Continue to invest in early years education and care and base state subsidies on a realistic assessment on the cost of providing quality childcare.

- Recognize and regulate the childminding sector and invest in early intervention program.

- Restore the Back to School Clothing and Footwear Allowance. and make Child Benefit payable until the end of school.

- Enable access to further and higher education by restoring the adjacent grant distance to 24km, extending SUSI to part-time students and expanding eligibility to the Cost of Education Allowance

- Benchmark social welfare so that is sufficient to lift people out of poverty and provide them with a Minimum Essential Standard of Living.

- Restore the cuts and changes to social welfare supports for one parent families.

- Introduce a higher social welfare payment for children aged over 12 years in recognition of higher costs faced by families with adolescents.

- End age segregation in social welfare payments by restoring the cuts to Jobseekers Allowance for those aged under 26.

- Increase the value of the Fuel Allowance to restore purchasing power parity to 2010 levels.

- Continue to invest in energy efficiency measures and initiatives including for those living in the private rented sector.