Out of control gambling has a devastating impact on individuals and families. 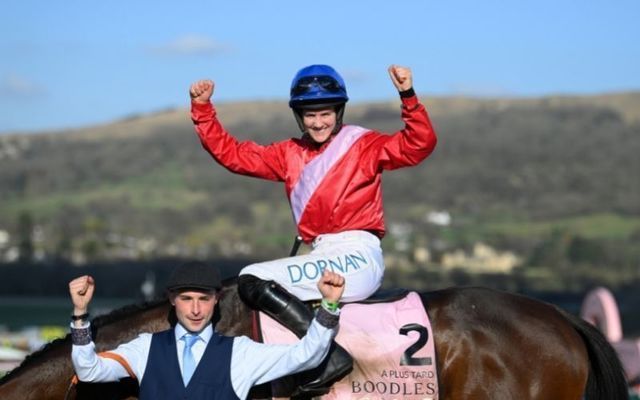 Irish jockey Rachael Blackmore celebrates after she rode A Plus Tard to victory in the Cheltenham Gold Cup, making her the first woman to ever win the prestigious race. Getty

This year during St. Patrick’s week, following a hiatus due to Covid in 2021, tens of thousands of Irish punters descended once again on Cheltenham, a large town on the edge of the Cotswolds in England.

The town hosts its annual national hunt racing festival in mid-March and it’s considered the pinnacle of the sport. The racing purists would have you to believe that this time-honored Celtic invasion is as a result of a love for horse racing and all things equine.

But that’s not true.  For the vast majority of attendees both Irish and British, the Cheltenham fest is an annual gambling binge. It’s similar to March Madness in some ways, except the excitement and the wagering is compressed into four days and 28 races.

It’s not just for those who attend in person.  Across Ireland in every town, village and city there are numerous opportunities during these four days to join in the frenzy. Betting offices are open, some pubs have illegal bookmakers operating and social clubs and work places hold sweepstakes.

Cheltenham big business with total legal turnover estimated at around £1 billion and while separate figures for Irish betting are hard to get, estimates put it at around one-third of that number.

For most it’s good clean fun, but for a significant minority of so-called problem gamblers Cheltenham presents yet another opportunity to feed a habit and cause further difficulties for self, family and friends.

The marketing onslaught from the bookies is relentless in the run up to the race meeting. Not only that, but it’s a time when non-gamblers become experts and share their insights on social media as to which horse will win particular races. For those struggling with addiction there are so many triggers to deal with.

Truth is, there are lots of different ways to have a bet in Ireland as the gambling environment includes a range of stakeholders and activities including the National Lottery, off-course and on-course betting, gaming machines and private members clubs and, of course, online betting.

One major aggravating factor is that having a bet is moving online, making it easier to hide transactions and consequently harder to track activity.  Ireland’s leading bookmaker Paddy Power said that 77 percent of its profits come from the online side of the industry.

Covid hasn’t helped either, and the College of Psychiatrists has identified loneliness, isolation and boredom as further key gambling drivers – all side effects of social distancing restrictions put in place to stop the spread of the virus.

That body reckons there are 40,000 people who could be classified as having a “gambling disorder,” a figure which is slightly less that the 47,000 moderate or severe “problem gamblers” identified by the Health Research Bureau.

Behind those figures are tales of the devastating impact that out of control gambling has on individuals and families. Stories of lies, hardship and breakup.

The sporting world has some high-profile cases.  Not surprisingly, if you play competitive sport you are three times more likely to have a serious issue with gambling.

That’s according to former Armagh All-Ireland football winner and reformed gambler Oisin McConville.  His addiction once saw him lose over €40,000 at Cheltenham, take out a €20,000 credit union loan to bet on a horse, and steal every single penny from his mother's handbag.

A hurler from Offaly, Derek Morkan, believes he lost €800,000 between the ages of 18 and 31, once losing €90,000 in a 10-day period. His life, he said, was one long series of lies to those who were closest to him.  He contemplated suicide, and indeed the psychiatric evidence shows that the effects of gambling on mental health for some are severe, with high rates of suicide in those with serious addiction.

But it’s not just high-performance athletes that can get caught in this web of deceit.  Research shows that in Ireland it is those who can least afford it that have the highest problem. It is generally associated with those who are unemployed and live in deprived communities.

Earlier this year a social welfare fraud carried out by Don O’Callaghan became the longest running scam in the history of the state and netted €500,000 over 33 years. Over that period he claimed pension payments for his dead parents. The money was spent on his gambling addiction, the courts were told, spending every afternoon in his local betting office.

What can be done? Clearly the first point to make is that personal responsibility must come into play. However, it’s important not to be glib and to understand that in the vast majority of cases other family members are impacted.

For instance, in one Irish study an alarming 74.5 percent of respondents stated that online gaming had caused financial problems in their household. The damage one man with a credit card can do can be catastrophic, and yes, it is mainly men.

The aforementioned College of Psychiatrists has recommended a five-point plan that includes public education, advertising controls, legislation, research and treatment services.  The purpose is to get the addict to take responsibility. That means family, work colleagues, doctors, etc. confronting them and not accepting the various strategies that are used to explain away losses and unpaid bills. Tough love.

A change in law is also required as it has long been recognized that current legislation is archaic and not fit for purpose in terms of governing and regulating an industry which has largely moved online and has developed innovative products and delivery mechanisms.  For instance, it’s a source of puzzlement why most of the Irish online operations are licensed in Malta, a country not known for its probity.

There is little optimism that there will be any important developments until 2024 at the earliest given the range of problems facing the government these days.  And there are so many vested interests pulling against real substantial change.

As an industry gambling generates approximately €8 billion in revenue annually, and employs an estimated 8,000 people. They have access to the best legal advice.

Two semi state bodies also have skin in the game, Horse Racing Ireland and Greyhound Racing Ireland. They also will not be cheerleaders for significant transformation of the landscape.

Will we get a grip on this problem? Probably, eventually, but I wouldn’t bet the house on it.